Meet Icy, the drag queen redrawing the boundaries of performance in Prishtina, just two years into the birth of Kosovo’s drag scene.

Icy’s October performance as part of a Prishtina drag show ended with a bang. A drag queen known for her frosty demeanour, eye-popping leather outfits and long, swinging ponytail, Icy was wheeled onto the stage in a wheelchair to face a packed audience at Prishtina’s Oda Theater.

Rising from the wheelchair and switching to crutches during a lip syncing performance of Lady Gaga’s ‘Born This Way’, Icy gradually gained strength until, by the end of the song, she was dancing up and down the stage, brandishing sparklers stuck into the barrels of two toy guns.

Describing it as one of his favorite shows, the performer who plays Icy on stage, Florent*, was worried that some people may have been offended. But according to him, the use of a wheelchair and crutches expressed his growing self-acceptance in the face of prejudice and homophobia he dealt with when he was a teenager.

“When I was younger, I was forced to view being gay as a disability. Slowly, I began to accept myself – shown by me moving from a wheelchair to walking with the crutches,” he explained. “Then, I explode into fire! It’s a message about learning how to show your true self.” 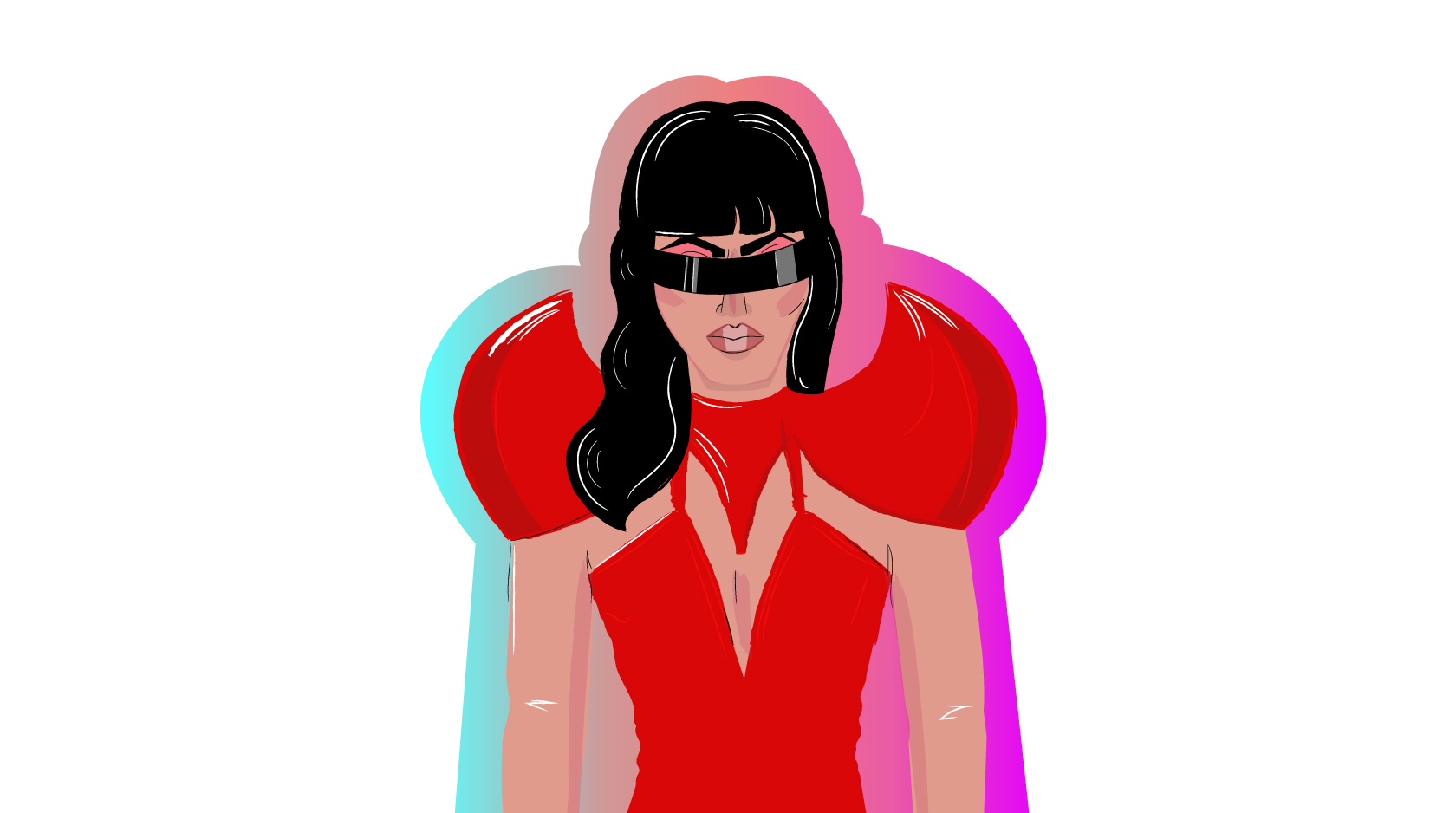 Icy has attained notoriety in the drag scene, said Lendi Mustafa, one of the organizers of the drag shows. “Icy is always on point with performances. When Icy performs, you have to prepare yourself to see something different, sassy,” he said. “When I first saw him perform, I could tell that he has been dancing in the closet for too long and now he has just exploded. It’s his superpower now.”

The drag scene in Kosovo has been a quiet but ever-sparkling presence over the last two years in Prishtina, with fans waiting with bated breath for news to pop up that a new show will be held, usually every few months.

Florent has been performing as Icy since the first show was held in Kosovo in 2017, and sat down with Prishtina Insight to talk about sending political messages through drag, curating a unique style and presence in the community, and the growing popularity of drag in a country that he believes still might not be ready for it.

The birth of Kosovo drag

In 2017, drag was exploding internationally thanks to the mainstream success of drag queen reality TV show RuPaul’s Drag Race, while in the same year, Prishtina’s drag scene was experiencing more humble beginnings.

The city’s first drag show was named ‘Prishtina is Burning’ after the famous 1980s film documenting the New York ‘ball’ scene, a community of queer and transgender people of color which is credited with shaping drag performance as it is understood today.

Seven queens were originally booked for the first show that was held at M Club in Prishtina, but the number began to dwindle in the run-up to the performance, Icy said. “In the end, only two queens performed. The others backed out after they found out that the organizers were going to make it a public event.”

Florent completely understood people’s decisions not to perform. There was no way to know who would show up to the event, nor how they would react to the performance. “I was skeptical too, I had a lot of fear of performing in front of what would be an audience with a majority of straight people, but my desire to perform was bigger than the fear.”

Kosovo’s drag performances are short but explosive glimpses into Prishtina’s queer scene, explains Lendi Mustafa. “What makes the drag shows in Kosovo different is definitely the people and the energy,” he told Prishtina Insight. “It always seems like a fresh start when there’s a drag show happening, as if we’re craving freedom and that’s where we find it, among the queens.”

Mustafa wishes that people knew more about the importance of the drag shows. They are more than just a night out, entertainment and fun, he said, they are a testament to the talent and skill that exists among LGBTI people in Kosovo. “The community has always struggled to do what they’re good at in public because of judgement and lack of opportunities to show themselves,” he said. “Now, drag shows are clearly showing our society what strength looks like, and how to own it despite such a long struggle.”

Florent said that he had no idea what a drag show entailed when he first signed up. “Initially I just did it for fun, but when I saw what a positive reception I got at the show, I dived in,” he said. “I fell in love, it felt completely me.”

Icy has come a long way since then, making her international debut in Serbia this summer when she performed Albanian pop song ‘Bye Bye’ by Tayna and Dafina Zeqiri alongside fellow Kosovar drag queen Diva in front of a Belgrade audience as part of the city’s Pride Parade.

Florent did not receive much support when he expressed an interest in performing in Belgrade, both in Serbia and in Kosovo. The Belgrade organizers brushed him off at first, but he would not take no for an answer. “Drag in Belgrade is a little more traditional than what we have here. All I had to do was send them a picture of me as Icy and that was enough to change their minds.”

Performing on an outdoor stage to an audience of thousands in Belgrade was an incredible rush, Florent said, adding that Icy received a lot of support from the Serbian drag queens, especially after making headlines across the country. However, the stories were not all positive.

“Belgrade is the center of the Balkan drag scene, and I was living out my dream. But the media coverage in Belgrade was really scary,” he said. “As soon as I arrived at the show I was surrounded by paparazzi, but most of them just wanted pictures so that they could shame the Pride Parade.”

Things are not so different in Kosovo.

Icy believes it is important to understand that a drag queen is a stage character, and is worried by media coverage that has often failed to understand the distinction between drag performance and identifying as a transgender person. “People create these drag queen characters for a lot of different personal reasons, and sometimes it relates to gender, but being transgender is not a character.”

For Icy, there is a tension between his desire to educate Kosovo audiences and the fear of online backlash, biased interviews and the misgendering of performers. “I’m not ashamed to admit that I am not ready to go out in public on television and talk about this personally,” he said.

According to Mustafa, who works for the Center for Equality and Liberty, CEL, media reporting on issues in the LGBTI community generally has improved in the last few years, but a lack of awareness remains when it comes to drag shows.

“Most of the queens don’t want to go public about their drag career,” he explained. “One thing I know for sure, the drag scene will attract so much attention in a few years. It’s becoming a thing now, although there were many shows in the past, the queens are willing to keep doing this. Everyone will want them in their bar, club or even theaters.”

Despite a general lack of awareness, the drag shows in Prishtina have only grown in popularity over the last two years. “People are attracted to the confidence, the attitude, the sassiness that drag queens have on stage,” Florent said. “I’d describe my drag as provocative – not in a sexual way, but in a theatrical way.”

Between the androgynous and the absurd

The character of Icy exists outside the gender binary, Florent explained. While drag was originally understood to be a word ascribed to men performing as a woman character, it has evolved into a more artistic performance capable of playing with and redefining the boundaries of gender expression.

For Icy, this means highlighting certain feminine aspects of the character Florent has created, while focusing on presenting the absurd or fantastic elements in a way that transcends being tied to labels like man or woman. “For me, it’s not really about being feminine, it’s more about experimenting,” he said. “Icy is androgynous, perhaps, but most important for me is that the styles I create are provocative.”

Growing up, performing in drag came naturally to Florent, often putting on shows for his family. But this tolerance did not last forever – by the time he reached 11 or 12, it was time to put this phase aside and “man up,” his parents said.

What followed was several unhappy years. Not only did his performances for his family disappear, but so did the fun and flair he wanted to exude in his personal style offstage. “In my personal life I always wanted to present more queer. Everything changed for me when I started to dress how I wanted at 18. It was shocking to people around me at the beginning, I literally did a 180 degree flip in my style, but I became so much more confident.”

Florent owes this confidence largely thanks to icons in pop music and on television from childhood. “I remember listening to Lady Gaga’s first album when I was eleven years old, and just praying to the heavens that one day I would be able to speak English so I could understand what she was saying,” he recalled, laughing.

Building the character of Icy has helped Florent personally to thrive, not only giving him the chance to develop his talent for onstage performance, but also to become comfortable in his own skin.

“Creating Icy is what gave me the confidence I have today,” he said.

*The name in this article has been changed.

‘A people for justice’ march gathers thousands in Prishtina