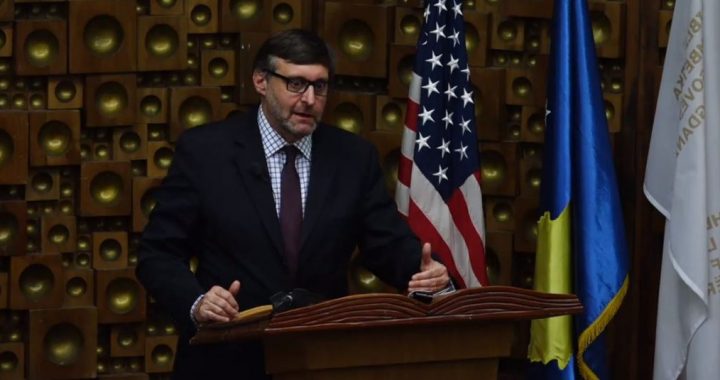 The US Special Representative to the Western Balkans Matthew Palmer. Photo: BIRN.

In a packed hall at the National Library of Kosovo on Friday, US Special Representative to the Western Balkans Matthew Palmer once more reiterated US commitment to the region and Kosovo’s sovereignty, while urging for a return to discussions with Serbia.

In a visit to Kosovo on Friday, the recently-appointed US Special Representative to the Western Balkans, Matthew Palmer, urged Kosovo and Serbia to return to the EU-facilitated dialogue in Brussels. The dialogue was halted in November 2018 after the imposition of a 100 per cent tariff on Serbian goods entering Kosovo by the outgoing Kosovo government, in response to Serbia’s campaign to prevent Kosovo from joining international policing organization INTERPOL.

“We hope to see the new government ready to address new challenges on domestic and external issues,” Palmer told an audience gathered at Kosovo’s National Library, before quickly moving onto the subject of the dialogue between Kosovo and Serbia, and the potential of an agreement between the two countries.

“Resolving once and for all the relationship between Kosovo and Serbia through full normalization remains a US strategic priority,” Palmer said. “It will free both Kosovo and Serbia from the legacy of hostility that drains their focus [..] and will open up economic opportunities.”

While Palmer declared that it is not the responsibility of the United States to decide on the timeframe for an agreement to be reached, he also stated that it was a matter of ‘urgency’ for US foreign policy. “Everyday without a solution, is a wasted day,” he said.

In light of recent geopolitical events, Palmer reiterated American support for Kosovo. “The United States will always stand behind Kosovo’s sovereignty and independence,” he said. “But we cannot see a path forward with full integration into the international system that does not include reconciliation with Serbia.”

As part of his visit, Palmer also met with Kosovo President Hashim Thaci, but no press conference to inform the media about the nature of the discussions has been held. Asked why he did not meet with the likely next prime minister of Kosovo, Albin Kurti, Palmer said that he has a long and “excellent” relationship with Kurti and met with the Vetevendosje leader two days ago in Skopje, North Macedonia.

In addition to the appointment of Palmer in August, Richard Grenell, who is also the US ambassador to Germany, was hired as a ‘special envoy for the Kosovo-Serbia dialogue in September 2019, though no clear details were revealed on his prerogatives, his mandate, or whether he will be under the auspices of the European Union, which has facilitated the dialogue since 2011.