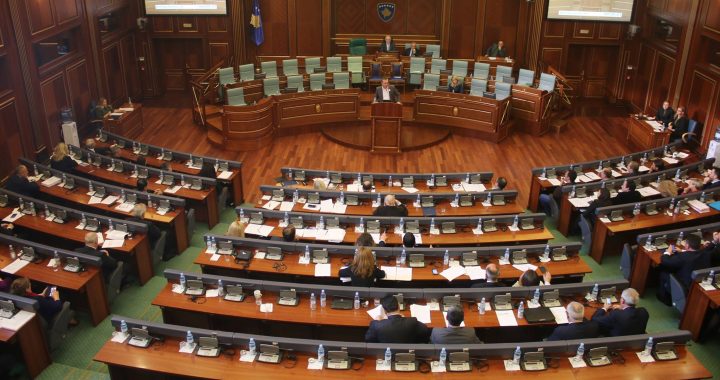 Parliament approved a proposal that would allow for government funds to be used to support international expertise in the investigation of the death of Astrit Dehari.

On Tuesday, Kosovo parliament held a session to address the case of Astrit Dehari, an opposition activist who died in custody. Parliamentary group Kosovo Democratic Party, PDK, called for the session and collected 40 signatures from PDK and Democratic League of Kosovo, LDK, MPs.

“We want to know what happened with the life of a youngster regardless of whether he was involved in the acts he was under suspicion of,” Pajaziti said.

On November 29, Vetevendosje submitted a petition containing around 25,000 signatures demanding the parliament to hold a special parliamentary session addressing Dehari’s death as well as for the resignation of the Minister of Justice Dhurata Hoxha and Minister of Internal Affairs Skender Hyseni.

Vetevendosje MP Glauk Konjufca said that Tuesday’s session was organized by PDK and LDK to avoid the petition’s demands.

“The petition by the citizens does not require only a debate, but it also requires addressing the responsibility [for the death]. It is not important to only talk in in this session,” Konjufca said. “I must say that Dehari was killed by the people in power and the absence of the state.”

During Tuesday’s session, the assembly approved a proposal put forward by PDK that offers the costs of international expertise for the investigation to be covered by the government, pending approval from the Dehari family.

At Tuesday’s parliamentary session, Pal Lekaj, chief of the parliamentary group Alliance for the Future of Kosovo, AAK, said that the US Federal Bureau of Investigation, FBI, should be involved in the investigation into Dehari’s death.

Lekaj accused both Vetevendosje and the government of trying to gain politically from this case.

“We [AAK] refuse to participate in this debate for this case because we consider that, as it is organised now, it does not contribute to the solution of the case,” Lekaj said.

Ismet Beqiri, Chief of LDK Parliamentary Group, said that he was not against discussing the case in parliament.

“We were never against talking about Dehari’s case in the parliament, but we wanted to wait for the forensics and the investigation report, even though the latter has yet to be published,” Beqiri said. “None of us should use this case for any political gain. It is hard for me to say this, but Dehari’s case should by no means be politicized,” Beqiri said.

Minister of Justice Dhurata Hoxha announced that she requested the prosecution to investigate the Dehari family’s attorney Tome Gashi regarding his conclusion on Friday that Dehari was murdered, drawn from a report published by two independent experts present at the autopsy.

Hoxha said that she expects the prosecution to interrogate Gashi and the two experts that challenged the official autopsy, released on November 21 by the Kosovo Institute of Legal Medicine, which stated that the cause of Dehari’s death was self-inflicted asphyxiation.

“I asked State Prosecutor Aleksander Lumezi to initiate an investigations on their claims and interrogate all three of them,” she said.  “The prosecution is investigating the causes of death and we need to let them do their job. It is in our interest to allow the investigation to finish, and involve internationals if it is necessary.”
Dehari  was one of the six Vetevendosje activists suspected to have attacked the Kosovo Assembly building earlier this year. Dehari spent 68 days in custody on suspicion of terrorism, although no indictment had been brought against him and he had not been interviewed by the prosecution.