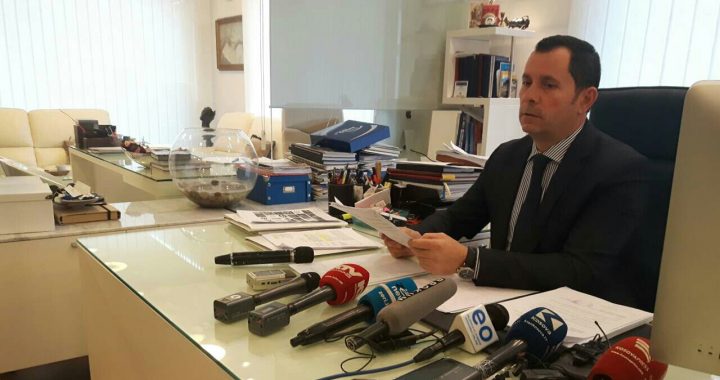 Astrit Dehari was murdered, claimed his family’s attorney after publishing a report by two independent experts present at the autopsy.

Opposition activist Astrit Dehari’s death was ruled as murder and not suicide, claimed attorney Tome Gashi on Friday after publishing the report of independent investigators selected by the victim’s family.

In the thirteen page report, independent experts Besim Ymaj from Albania and Besim Latifaj, Consultant Pathologist at the University Hospitals of North Midlands, United Kingdom, affirmed that the cause of death was asphyxiation. However, they claimed that there were signs of self-defense.

“They [the independent doctors] considered that there were injuries on his [Dehari’s] left shoulder and other parts of the body that came as a result of mechanical self defense. This leads to the conclusion that this was murder, not suicide,” Gashi said.

An autopsy report released on November 21 by the Kosovo Institute of Legal Medicine stated that the cause of Dehari’s death was self-inflicted asphyxiation. Following the release of preliminary autopsy results, Dehari’s family, civil society, the opposition party Vetevendosje, and common citizens criticized the investigation led by local prosecutors and pressed for an independent investigation.

Gashi said that Friday’s report by independent experts, who were present at the autopsy, shows that the asphyxiation was violent.

“The injuries on Dehari’s head were caused by objects similar to brass knuckles,” Gashi said, stating that Dehari’s hair was not shaved off during the autopsy in order to hide these wounds.

Furthermore, Gashi said that the injuries on Dehari’s arms came as a result of self defense and deemed the claims made by the legal medicine institute in Prishtina that the injuries were caused during the transportation of the body to be untrue.

During the press conference, Gashi showed pictures of Dehari’s prison cell after his death, along with objects found in the room.

Gashi said that the Chief Prosecutor Syle Hoxha and case prosecutor Metush Biraj investigated the case as a suicide from the beginning instead of investigating it as a suspicious death.

“The prosecutors misused their office on November 19, because they used a deceiving report in which they determined the causes of death of Astrit Dehari in order to justify the termination of investigation,” he said.  The expert report was also forwarded to the two prosecutors.

Astrit Dehari, a 26-year-old Vetevendosje supporter, died on 5 November in the Detention Center in Prizren. Dehari  was one of the six Vetevendosje activists suspected to have attacked the Kosovo Assembly building earlier this year. Dehari spent 68 days in custody on suspicion of terrorism, although he was not yet indicted.