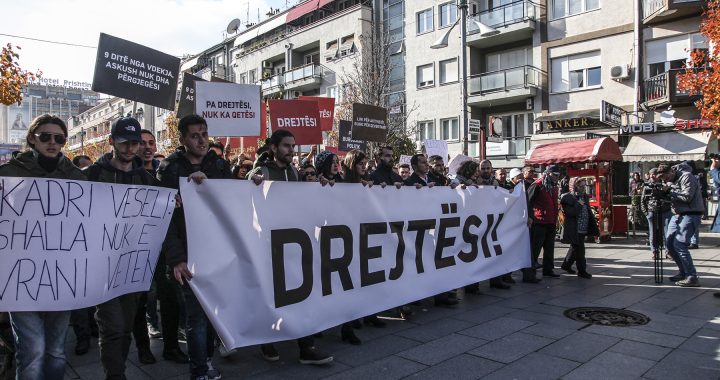 Citizens demand an independent investigation into death of opposition activist

On Monday thousands of protesters demanded an independent investigation into the death of Astrit Dehari, a Vetevendosje activist who died last week in police custody.

Thousands marched in downtown Prishtina today, answering the call of civil society organizations and members to demand justice for Astrit Dehari, who died nine days ago in Prizren prison.

The protesters marched from Zahir Pajaziti to the Skenderbeg square in Prishtina, demanding an independent investigation into the death of the 26-year-old Vetevendosje activist who died last Saturday in mysterious circumstances.

Dehari and five other opposition activists were arrested in August, suspected of attacking the Assembly building in August. No official charges were raised against him, and the case prosecutor clarified on Sunday night that the suspects had not even been interviewed by the prosecution.

“We’re planning to interview the suspects halfway through this month and after the interviews we will analyze their declarations and see how to proceed further,” Abdurrahim Islami told BIRN Islami also confirmed that the late Astrit Dehari wasn’t interviewed either.

On Monday, protesters marched down the main boulevard in Prishtina, yelling “No justice, no peace” and “Free the activists.”

“We urgently ask for an independent investigation so that citizens learn the truth and for justice to be restored,” said Luzha, explaining that no officials from the prison or the police had been suspended or fired yet.

“Justice cannot be done with the people who are currently doing the investigations because their actions so far have only caused confusion,” she said. On the day of Dehari’s death regional police director claimed that he had died of an overdose. The prosecution made clear on Monday that the activist died of asphyxiation, but no autopsy report has been published.

Civil society activist Jeta Berisha also pleaded for the involvement of external and independent investigators into the case.