Albanian weightlifting, a story of glory and despair

Weightlifting has given Albania more medals and pride than any other sport to date, but can it survive a lack of institutional support and recent doping scandals?

March could have been a great month for sports in Albania. Tirana was chosen by the European Weightlifting Federation, EWF, as the host city for the European Championships.

In November, high officials of the Federation visited Tirana to meet politicians and sports officials and to kick off the organization of the prestigious event; one month later, the competition’s detailed agenda was published on the Federation’s site.

But dark clouds quickly gathered over Albanian weightlifting when Romela Begaj, a long time medalist, tested positive for doping after winning a snatch gold medal in the World Championships in California in December. Begaj has denied she used the substance. The President of the Albanian Federation, Elez Gjozaj, resigned amid the public backlash and embarrassment.

It soon become clear the that European Championships could not possibly be held in Tirana, leaving the EWF the burden of finding another host country two months before the championship date. 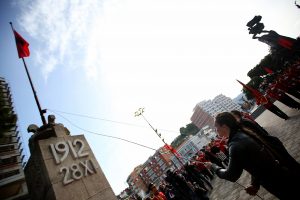 Romela Begaj and Daniel Godelli raising the flag on November 28, 2014, in Vlora. | Photo courtesy of the Albanian Prime Minister’s Office.

“It is an unexpected and very serious problem for the EWF and our member federations,” said Hasan Akkus, general secretary of the European Weightlifting Federation, to Inside the Games.

The shift has created confusion and even financial loss for many European teams.

“Is an emergency situation… I heard that some nations had already bought their plane tickets to Tirana,” said Alex Padure, secretary general of the Romanian Federation.

According to Brian Oliver, a sports writer for Inside the Games, although some influential people in the sport were pleasantly surprised by the resignation because they saw it as a sign of taking accountability for the doping case, many were disappointed that Albania would not be hosting the championship.

“Certainly, the reputation of the Albanian Federation has suffered because of the practical difficulties now being faced by nations all over Europe,” he told Prishtina Insight.

Fluctuations from successes to despair are nothing new in Albanian weightlifting; this has been the trend throughout the country’s 46 years of international representation in the sport.

The glory started in 1972 when 27-year-old Ymer Pampuri—a former circus clown—won a gold medal against all odds in the World Championships, lifting 127.5 kg in West Germany. 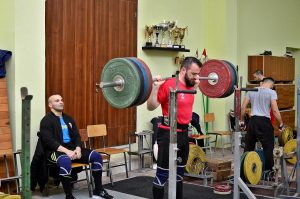 However, 1985 was a difficult year. On the way back to Tirana from Warsaw, after participating in the European Championships, two weightlifters, Aleksander Kondo and Xhelal Sukniqi, separated from the rest of the team and got lost in what was then Titograd, now Podgorica, Montenegro.

A few months later, Albanians learned that they had fled to the US as a sign of protest against the regime of the Albanian dictator Enver Hoxha.

Kondo was the most prominent weightlifter of Albania and broke national records. Two years after fleeing to the US, he lost his life in a car accident in Queens, New York.

Despite being active in the sport for almost two decades, to this day the state has never paid for my health or life insurance. All athletes have the same problem.

About five years later, Albania’s period of glory in weightlifting further disintegrated with the collapse of the communist regime.

Weightlifting took its hardest punch when the best athletes, including the national champions Pirro Dhima and Luan Shabani, left to join Greece’s national team. Albanian fans were heartbroken when their former champion Dhima – racing for his newfound country – yelled “Gia tin Ellada!” (“For Greece!”) while taking gold at the 1992 Summer Olympics.

Years passed and nobody really believed that Albania would rise again and stand out in international weightlifting until Ilirjan Suli and Ilir Kafarani joined the scene to lift people’s hearts once again. 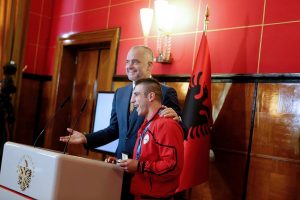 Winning European medals in gold, silver and bronze in disciplines of snatch, meaning the athlete lifts the barbell from the ground over the head in a single move, and clean&jerk, meaning the athlete first lifts the barbell to the collarbone, takes a break, and then attempts to lift above the head, became routine. In 2009 Albanian weightlifters were awarded three medals in the European Championships; in 2010 they took five; in 2011 and 2012 they took three. Albanian weightlifters took six medals in 2014, and last year in Croatia, they got four.

While weightlifting has given Albania more medals and pride than any other sport to date, since the fall of the communist regime, the state never created a national strategy for the sport.

Politicians rush to airports with national flags to receive the weightlifter champions and take some of their glory, but turn their backs anytime athletes asked for legislation that could give them financial stability.

Albania’s Ministry of Sport confirmed for Prishtina Insight that for 2018 they granted the weightlifting federation a budget of only seven million Lek (around 53,000 euros). With this money, they have to organize national championships, send athletes abroad to compete, and pay the officials’ salaries. This is half of the budget that the federation had in 2017.

The only extra benefit athletes receive for their personal care is a monthly allowance of 280 euros given by sports clubs to fund their special high-protein food regimine.  Prishtina Insight learned that even the most elite athletes receive no more than 3,7000 Lek a month (around 280 Euros). They receive no salary or health and life insurance. 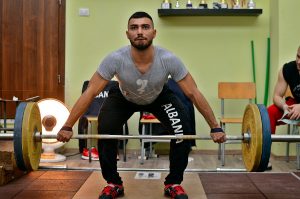 In April 2017 the Parliament passed a new law to provide regular contracts, a monthly salary, food allowance, and health and life insurance for the weightlifters, but according to multiple anonymous sources, the law is still not being implemented.

Erkand Qerimaj is without a doubt one of the most prominent weightlifters that Albania has ever had. The 29-year-old kicked off his international career in 2002 when he took gold in the European U17 Championships in France, while today he has tens of medals to his name.

“I don’t have any more space in the house to display them,” Qerimaj told Prishtina Insight without hiding his pride. 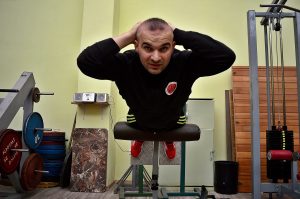 However, when the conversation shifts to the benefits of being a champion, his enthusiasm wanes.

“I have fought for many years with other athletes to have a proper law on sports that will treat athletes decently. Today I can say that nothing has yet changed, though we still we are hoping,” he said. “Despite being active in the sport for almost two decades, to this day the state has never paid for my health or life insurance. All athletes have the same problem.”

Gjergj Vyshka, a journalist that has covered weightlifting for over a decade, told Prishtina Insight that Albanian weightlifters face enormous personal challenges, and after the camera lights are gone they are left alone.

“They often face education problems and struggle to get a job and a house,” he said.

Vyshka brings up the example of Romela Begaj, who became a bronze medal world champion in the snatch style in 2011.

“She asked for government support. The reward that she got was a job as a physical education teacher in a village near Tirana,” Vyshka recalled.

According to Vyshka, from 2005 to this day there have been 14 confirmed doping cases amongst Albanian weightlifters. In some cases, the same athlete repeated the intake of illegal substances.

In 2012 Qerimaj won big in the European Championship in Antalya: gold in clean&jerk and silver in snatch in the 77 kg category.  But he also tested positive for doping.

We still don't have a doctor to advise us on banned substances when we’re training.

“It was a very difficult moment. I took Creatine for better muscles and I declared the intake before the contest. My trainer and I didn’t know that a few months before the supplement had been banned and listed as a doping substance,” he told Prishtina Insight.

Qerimaj was suspended for  a year from international activities and had a strong comeback in the European Championship in 2014, winning gold in two categories  (snatch and clean&jerk combined) in Tel Aviv.

“That bitter experience came from the negligence of institutions that should supervise athletes closely before contests. We still don’t have a doctor to advise us on banned substances when we’re training,” Qerimaj said.

Vyshka, the sports journalist, believes that the main responsibility for doping falls on the athletes and their trainers, but he emphasized that the lack of care from the government and sports bodies has contributed to the situation.

“The athletes do not have a proper food or medical regime. These crucial elements are neglected,” he said.

“The procedures in the center are very slow and they do not always have the capacity to assist us. I go to the private clinic for my examination especially before championships because it has quicker and more reliable services,” he said.

Constant discouragement seems to also play a role when bright athletes that surrender to doping.

“Albanian weightlifters feel neglected. They see athletes like Pirro Dhima and Luan Shabani – who went to represent Greece – having a decent life, fame and being rewarded for their talent. They know that they with never get what they have,” Vyshka said.

According to Qerimaj, the athletes are not rewarded when training, and they only receive financial rewards when they win international medals.

“There is so much pressure on them, so they risk everything and take forbidden substances – hoping that they won’t be detected – only to get a financial reward,” he said.

The Ministry of Education and Sport provides monetary rewards for athletes who win medals. An Olympic medal winner can be awarded up to 20 million Lek (150,000 euro), and a European contest winner up to 7 million Lek (50,000 euro). 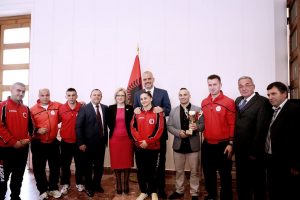 Edi Rama receiving the national team of weightlifting after the success in European Championship in May 2014. | Photo courtesy of the Albanian Prime Minister’s Office.

According to Ministry of Education and Sport, doping in weightlifting has not only damaged the athletes’ health and credibility, but has also taken its toll on the country.

“They have tainted Albania’s image on the international scene,” the Ministry told Prishtina Insight in a written response. “We are conscious that doping in sports cannot be eliminated only with legal measures, but many other actors need to put forth their efforts.”

They have tainted Albania’s image on the international scene.

Doping, however, is a global sports issue that has tested multiple efforts to uproot it.

In recent years, doping has been an international epidemic for weightlifting, while the International Olympic Committee has warned the international federation that if high levels of doping in this sport will continue, the discipline might be entirely excluded  from the 2024 Olympics.

A few months ago, nine countries were barred from participating in international contests after the IWF found repeated cases of doping, putting the whole discipline under extreme scrutiny.

Oliver believes that the US model of fighting doping in weightlifting might be a good example to follow for other countries. The US weightlifting team performs thorough checks and puts more emphasis on coaching.

“If the whole [anti-doping] program spanned eight years in the US, it would probably take at least as long in Albania and it might be more difficult if the sport’s reputation has suffered,” he said.

by Arita Gerxhaliu
Next: Features

Useful apps to have in Kosovo