Albin Kurti, the leader of Vetevendosje, who was ousted as Kosovo’s prime minister in March has also experienced a turbulent autumn.

This time the trigger was the Specialist Prosecutor’s Office in The Hague, which confirmed an indictment charging Rexhep Selimi, the chief of Vetevendosje’s parliamentary group, with war crimes and crimes against humanity.

Selimi was indicted alongside three other former senior figures in the Kosovo Liberation Army who became top politicians – recently-resigned President Hashim Thaci, the leader of Democratic Party of Kosovo (PDK), Kadri Veseli, and the chairman of the national council of the Social Democratic Initiative (NISMA) party, Jakup Krasniqi.

The indictment, which lists alleged crimes including illegal detentions, enforced disappearances, persecution, torture and murder, astonished Kurti, who described it as an attempt at historical revisionism.

“To tell you the truth I did not expect such an attack on the KLA. This phrase ‘joint criminal enterprise’ is an historical and political subversion of the KLA,” Kurti told Prishtina Insight.

“I believe that this will be harmful for state-building in Kosovo, for justice in Kosovo, and for the Kosovo Liberation Army and its values,” he added.

The Kosovo Specialist Chambers, where the indictees will be tried, were set up to try crimes allegedly committed during and just after the Kosovo war from 1998 to 2000. They are part of Kosovo’s judicial system but located in the Netherlands and staffed by internationals.

Kurti recalled the pressure put on Kosovo MPs from the international community to vote to establish the Kosovo Specialist Chambers in August 2015 after a previous vote in June that year went against the establishment of the so-called ‘Special Court’. He described this as “institutional violence.”

For Kurti’s Vetevendosje, the state of Kosovo must now be ready to collectively organise the defendants’ defence, although in essence he disagrees with the Specialist Chambers trying members of the KLA.

“I have higher ambitions for the state of Kosovo and therefore I want justice to be done in local courts,” he argued.

“I was not against the [International Criminal Tribunal for the Former Yugoslavia] because the Hague’s Tribunal dealt with [war crimes] from all the region, but this one deals only with Kosovo,” he added.

Although October was traumatic for Vetevendosje and its leader, developments across the Atlantic Ocean have given Kurti hope.

The presidential elections in the US and the victory of the Democratic Party candidate elated the Vetevendosje leader, who had called on the Kosovo Albanian diaspora to support Joe Biden.

“I think that for the Albanian national interest and for the independent state of Kosovo, Biden is incomparably more progressive and I had no doubt who to support,” he explained. 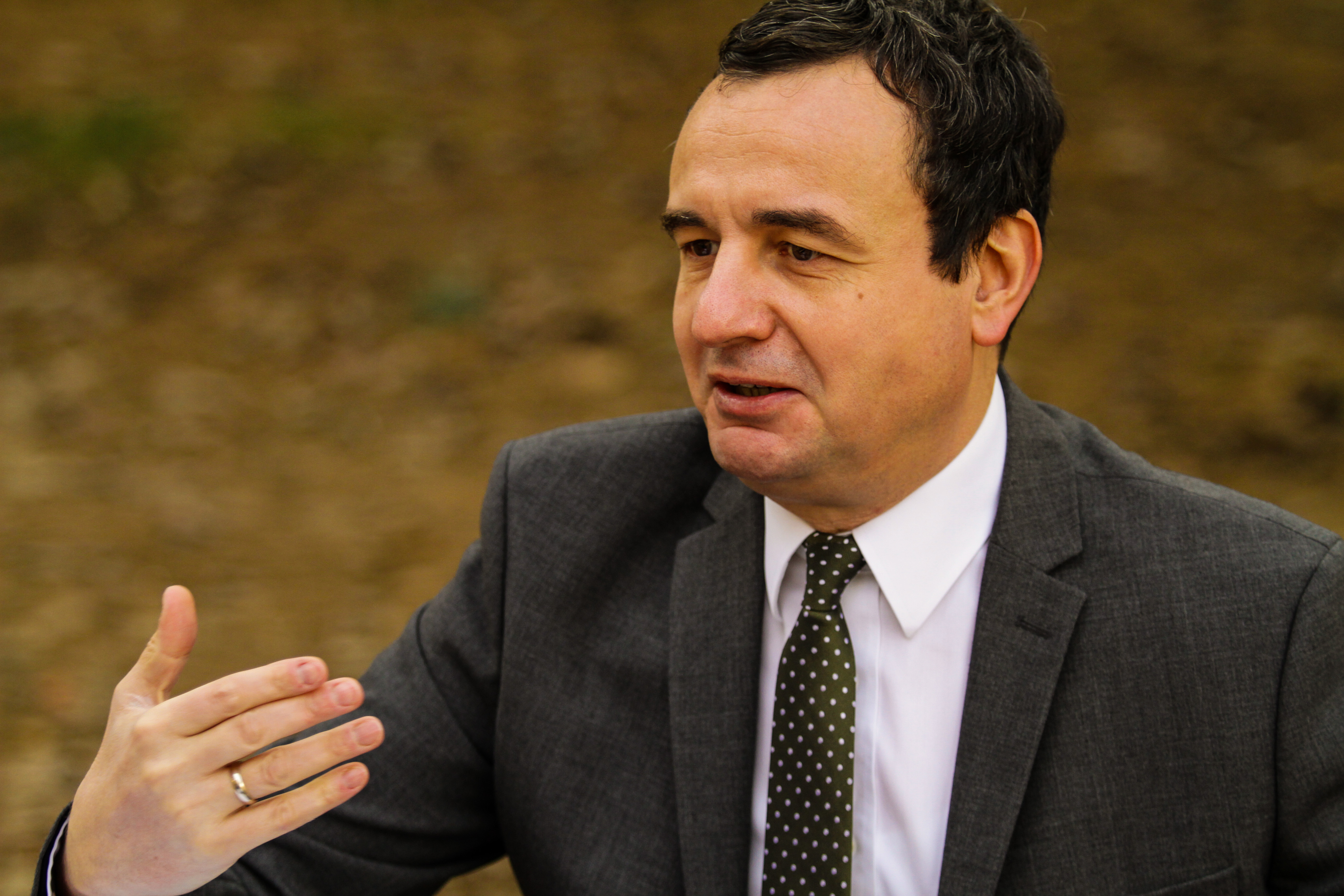 Kurti denied that he urged the diaspora to vote for Donald Trump’s rival because of his personal bitter experience about the US president’s envoy for the Kosovo-Serbia dialogue, Richard Grenell.

Kurti had accused Grenell of playing an active role in overthrowing his government in March this year in a bid to get a Kosovo administration that would be more amenable to signing a quick-fix agreement with Serbia to give Trump a pre-election foreign policy ‘win’.

Under Trump’s auspices, Kurti’s replacement as Kosovo’s prime minister, Avdullah Hoti, signed an ‘economic normalisation’ agreement with the US at the White House on September 4. Serbian President Aleksandar Vucic signed a similar but not identical agreement during the same meeting.

But for Kurti, Biden’s election means that the agreements are now null and void, and only remain valid for Hoti and Trump’s envoy: “Those agreements can be discussed only privately between Hoti and Grenell,” he said.

Biden strongly backed NATO’s military intervention that ended the Kosovo war in 1999, and recently said he will encourage the EU to grant visa liberalisation for Kosovo so the country can move towards membership of the bloc. A road in Kosovo is named after his son Beau Biden, who was deployed to the country while serving with the US Army.

Kurti went on to criticise what he said was the Hoti government’s lack of transparency over the ongoing EU-mediated Kosovo-Serbia dialogue in Brussels to normalise relations.

It has been reported that an agreement has been reached between Prishtina and Belgrade on the issues of economic cooperation and missing persons, but that it will not be revealed until both sides agree on all the other issues under negotiation.

“No good things can come of this non-transparent approach and we cannot consider agreements valid when they are not published and moreover when they are signed by an illegitimate government,” Kurti said.

He pointed out that according to opinion polls, the Brussels dialogue is the fifth most important issue for the Kosovo public.

“We need to remind ourselves that our priorities must be employment and justice, economic development and the fight against corruption,” he added.

Kurti’s prescription for the current situation is fresh elections, and the opinion polls have been looking promising for him

“In the upcoming elections we will win 50 per cent of the votes, perhaps not alone but with another party,” he said, referring to Vetevendosje’s recent affiliation with Vjosa Osmani and her initiative to set up a new party after being removed from the Democratic League of Kosovo, LDK.

Kurti added that he has ceased to believe in cohabitation in government with the so-called ‘establishment’ parties – PDK and LDK, which have governed the country since the end of the war two decades ago.

“While I negotiate above the table for the governing programme and plan, the other parties negotiate underneath the table about how to accommodate their party militants, distributing tenders to their businessmen, et cetera,” he said. 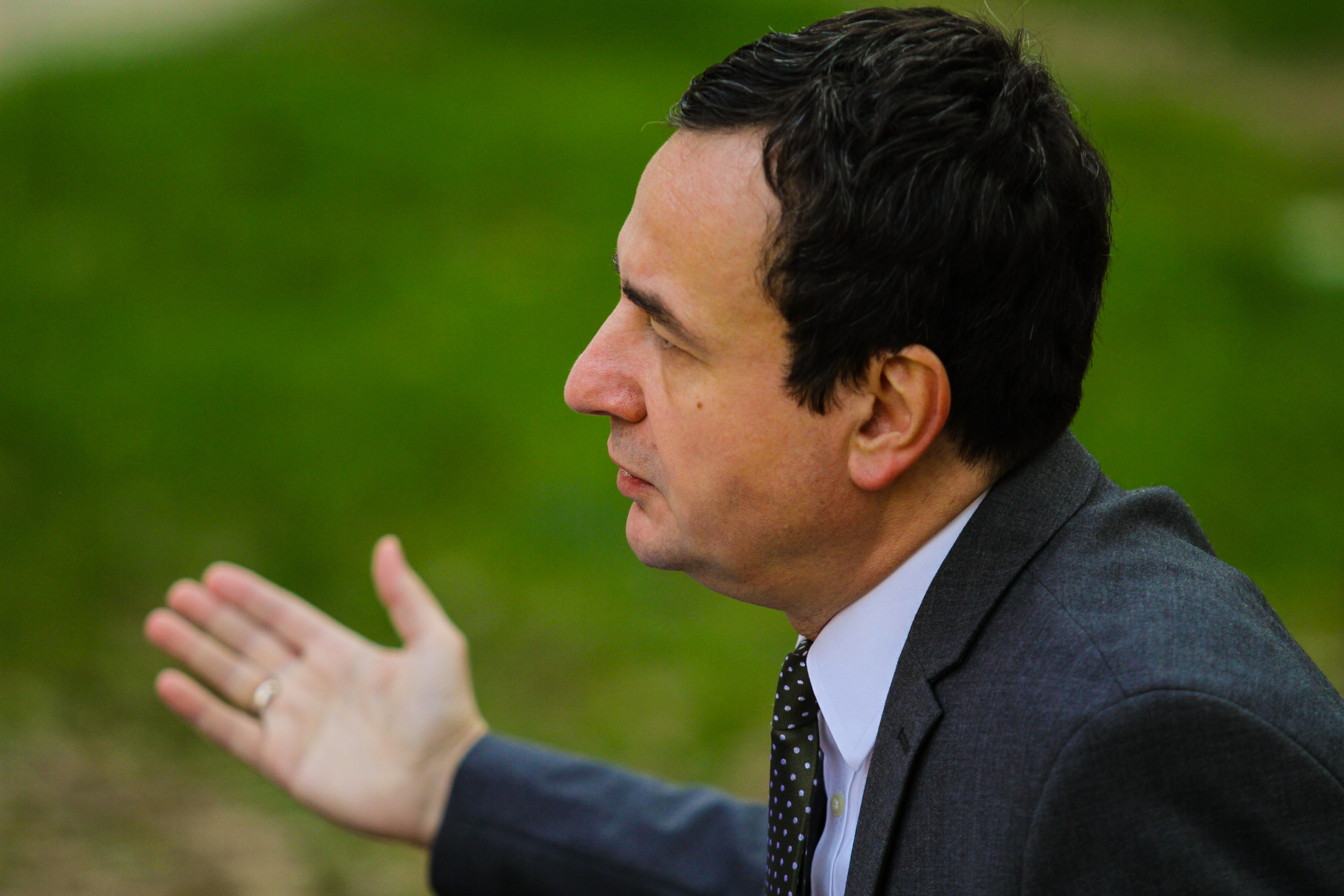 He described the Kosovo state as having been ‘captured’ by these parties, citing as an example the fact that the two politicians who won the most votes at the last election, Vjosa Osmani and himself, are both in opposition.

“This explains that in this country there is no democracy and that Kosovo remains ‘state-captured’,” he said.

by Xhorxhina Bami
Next: Opinion