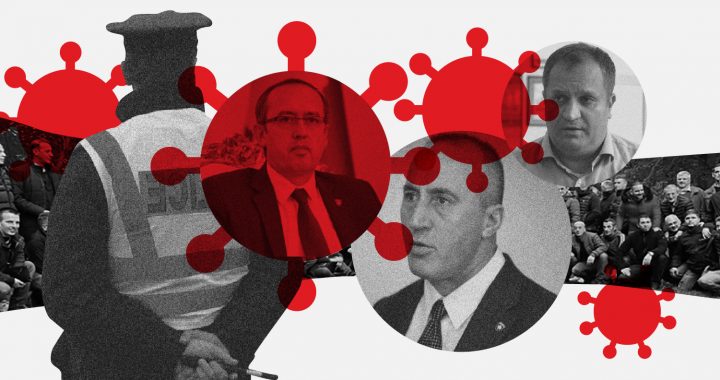 Kosovo’s constitution may proclaim that everyone is equal before the law – but its selective imposition of punishments for breaking government pandemic measures shows otherwise.

“Everyone is equal before the law,” reads the constitution of the Republic of Kosovo. However, the pandemic has again highlighted that, as in George Orwell’s classic book Animal Farm, some categories of citizens are more equal than others.

Recently, a photo of more than 70 people, all men, standing side by side, was posted on social media by Bekim Jashari, the mayor of the town of Skenderaj.

Besides Jashari, three other mayors, one deputy mayor, four MPs, two deputy ministers and the leader of Alliance for the Future of Kosovo, AAK, former prime minister Ramush Haradinaj, could be seen in the photo as well. The photo was proudly shared by other officials who were part of the group.

This gathering of over 70 people, mostly officials, clearly violated the Law on Preventing and Combating the Covid-19 Pandemic which, among other things, stipulates penalties of up to 35 euros for not wearing a mask or for failing to respect social distancing measures.

However, authorities in Kosovo have yet to take any measures against any of the officials seen in this photo.

On the same day when these state officials were violating the pandemic law, the Kosovo Police imposed hundreds of fines on other citizens for not complying with COVID-19 precautionary measures.

Police reports indicate that officers impose between 500 and 1,000 fines on health measure violators every day. Since the Law on Preventing and Combating the Pandemic was enacted on August 25 until October 27, the police imposed about 55,000 fines in total. In some cases, the police fined persons sitting in their cars.

On the day when the 70 officials were having their group photo taken side by side, without masks, Refki Hyseni, from Fushe Kosove, accused the police of mistreating his 14-year-old son who was not wearing a mask at the time of his detention.

Later, the Police Inspectorate admitted it had launched an investigation into the police officers on suspicion of having abused the juvenile.

Three days after the same group photo was taken, police fined Ardian Gola, a professor at the University of Prishtina, for not wearing a mask in public.

Following the imposition of the fine, Gola posted a collective photo of the 70 officials, urging the police to apply the same criteria to public officials who openly violate the COVID-19 precautionary measures.

On July 11, while still President, Thaci appealed for strict adherence to measures designed to prevent the spread of the virus. Two weeks later, however, when he met a group of elderly citizens, everyone was wearing masks except himself.

A month later, he proudly posted the photos taken in an oda – a typical traditional large room in an Albanian household – accompanied by traditional Albanian songs.

Prime Minister Hoti also posted photographs on social media of him playing basketball, one day after his government imposed 28 restrictive measures against the pandemic – which included a ban on sporting activities.

The Mayor of Prishtina, Shpend Ahmeti has been very active throughout the pandemic with his appeals to people to wear masks and respect precautionary measures. He was seen during August dining with many other well-known faces.

Despite all these violations, not one public official has yet been fined.

Such selective justice is not new in Kosovo. During the pandemic, officials from the former Haradinaj government posted videos on social media of them illegally shooting bullets through a window in Malisheva back in 2017.

Later, the courts fined the two officials, one a deputy prime minister, with 1,700 to 2,400 euros, significantly lower than the fines provided by the criminal code for that offence, or up to five years of imprisonment.

What is especially disturbing is that the perpetrators of these unlawful acts proudly post their evidence on social networks, confirming either that they are not afraid of the law, or perhaps that they are not even aware their behaviour is unlawful.

At a time when state officials are imposing rules and appealing to citizens to wear masks and comply with the various preventive measures, and when their behaviour proves quite the opposite, it makes it difficult to take their messages seriously. Selective law enforcement is worse than not enforcing the law at all.

Agron Demi is a Senior Researcher at the GAP Institute in Prishtina.