Against the backdrop of Kosovo’s formation of its first official  army, a new brigade combat team from Hawaii arrives in Kosovo, marking 20 years of U.S. support since the end of the war to preserve security and peace in Kosovo.

US Army Specialist Rhodger Savella was barely a year old when NATO began its 78-day bombing campaign in March 1999 to end the repression and ethnic cleansing of Kosovo Albanians by the Serbian regime.

Today, the 20-year-old is among the 150 American soldiers serving in the 29th Infantry Brigade Combat Team from Hawaii as part of NATO’s longest ongoing peacekeeping mission in Kosovo called KFOR.

Savella is the youngest in his brigade and never thought he would join the US Army, let alone deploy to a place he knew very little about 13,000 kilometers away from his home in Oahu.

His new home for the next nine months is at Camp Bondsteel, a sprawling US Army base in southern Kosovo that was built just after the war ended, a few kilometers away from the city of Ferizaj.

The base is named after James Leroy Bondsteel, an American soldier who served during the Vietnam War and where he earned the Medal of Honor. 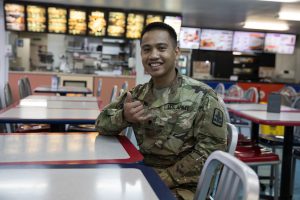 “It feels good to be part of something that has a lot of history of supporting the people here,” Savella said at one of the camp’s dining facilities that sells Burger King and Taco Bell.

Savella is a truck driver for the National Guard back home.  In Kosovo, Savella is still learning how to navigate the unfamiliar roads in Kosovo and in return, he is sharing a little something from his island.

“I’m teaching the local security guys in other bases the word ‘aloha’, so every time I pass by, I say “aloha” and then I shaka,” he said to Prishtina Insight, adding that the shaka sign symbolizes the the spirit of the Hawaiian greeting, “aloha.”

The soldiers from Hawaii arrived in Kosovo in November as part of KFOR’s Multi-National Battle Group-East which covers half of Kosovo. Many of them have never left the US before. Some were deployed before in Afghanistan; for others, Kosovo is their first deployment. 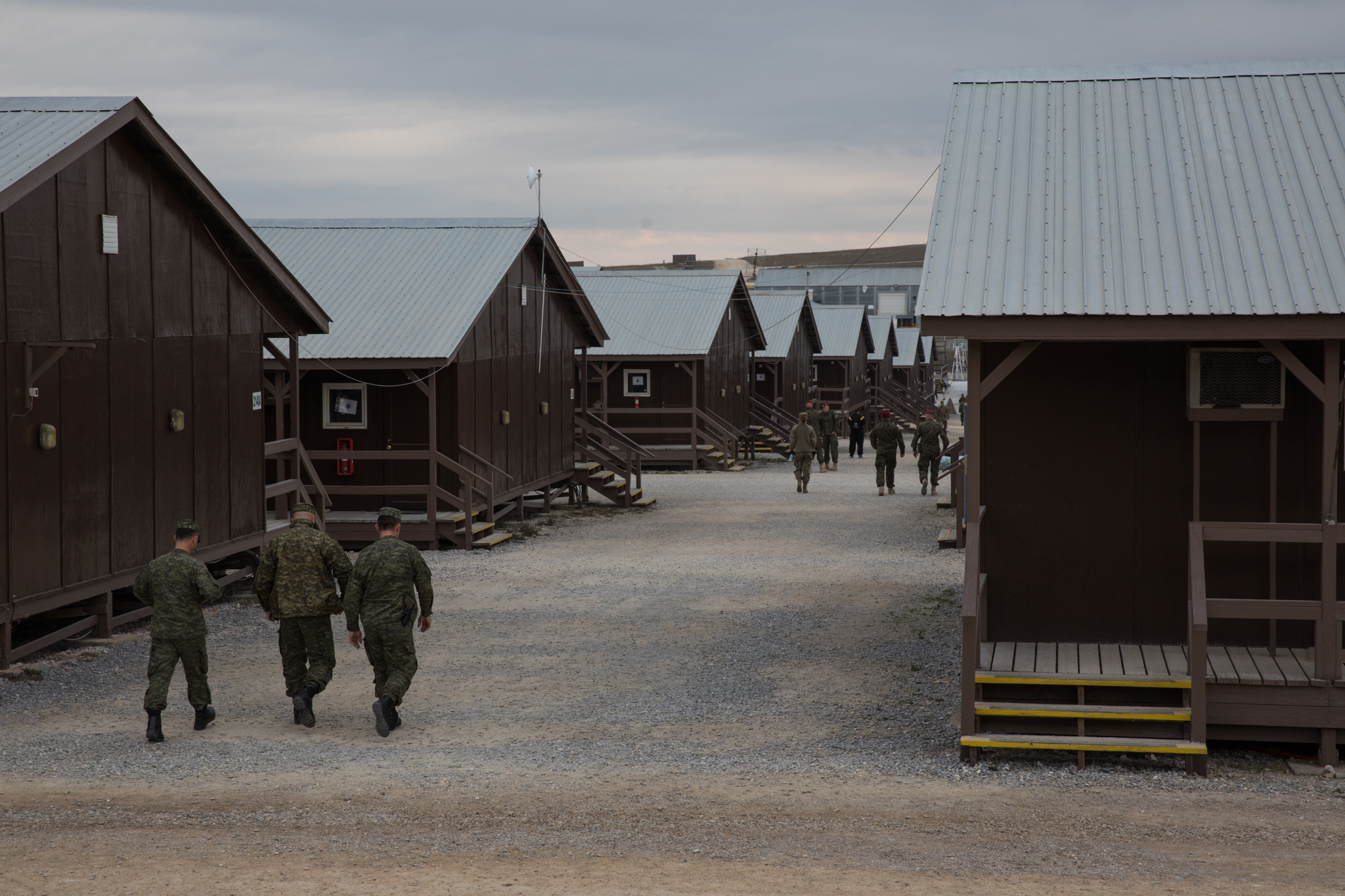 Over the last 20 years, KFOR has been reduced from more than 50,000 troops in 1999 to around 3,600 soldiers today from 28 NATO member and contributing nations – the US makes up the largest contingent with around 650 soldiers who are stationed at different bases such as Bondsteel, Film City in Prishtina and Camp Nothing Hill in northern Kosovo.

At Camp Bondsteel, besides the Americans, soldiers from Turkey, Poland and Romania also contribute to Multi- National Battle Group-East. The US Army National Guard traditionally leads the unit as part of KFOR’s overall mission “to contribute to maintaining a safe and secure environment as mandated by the United Nations Security Council Resolution 1244.”

Major Scott Aihara is the Sexual Assault Response Coordinator of the US Army’s SHARP program which handles all assault case for American soldiers serving  in Kosovo.

News of Aihara’s deployment to Kosovo was received with astonishment from his friends.

“They asked: ‘where is Kosovo?’ That is not somewhere you would ever kind of think of. I didn’t know about this place until I got my orders to deploy and then we had to do all this research,” he said to Prishtina Insight, smiling.

This is also his first deployment and first time in Europe. Aihara’s hometown of Aiea on the island of Oahu has around 10,000 people and lies next to Pearl Harbor, the site of the 1941 bombing during WWII. 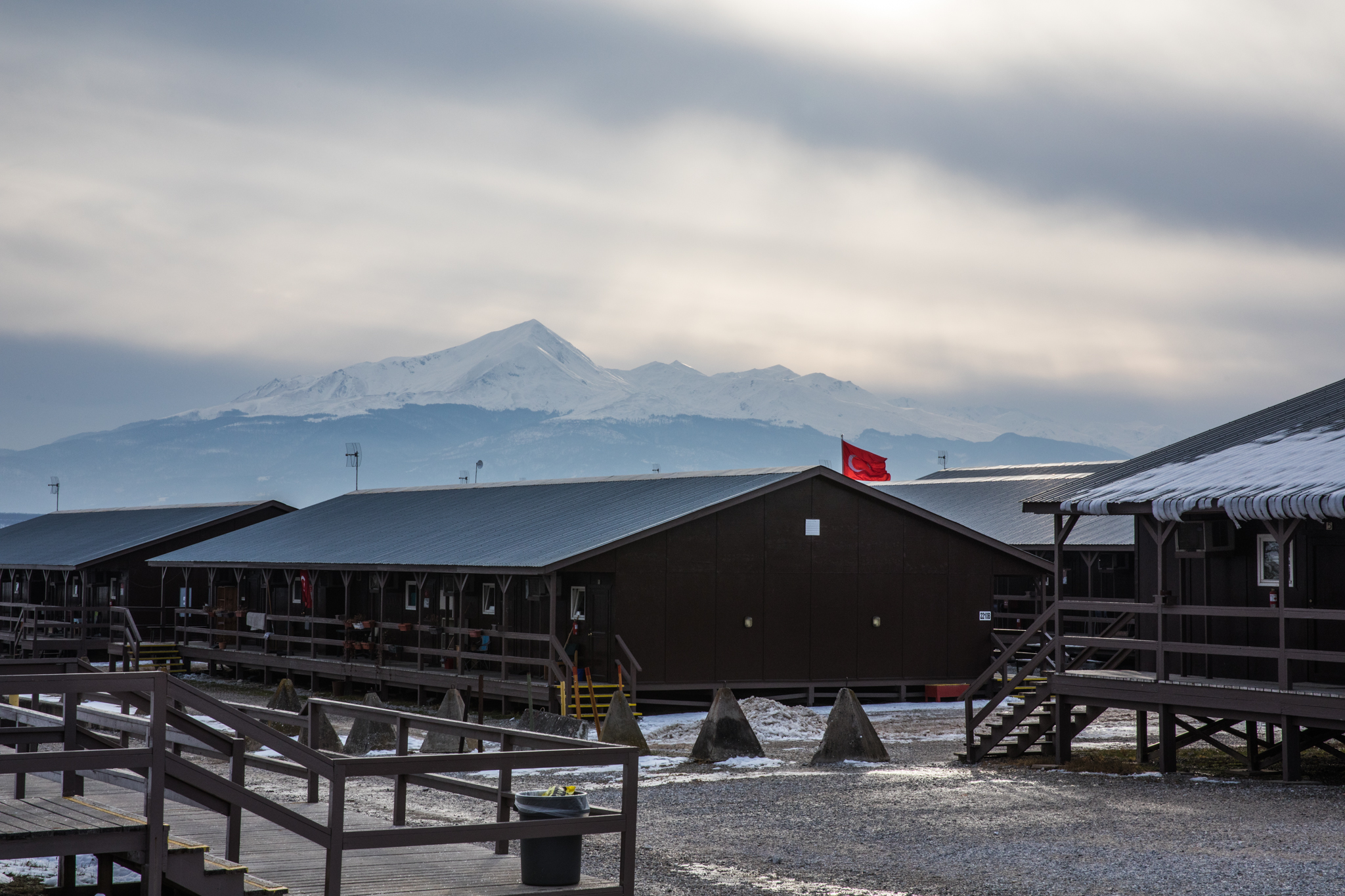 A Turkish flag flies above the SEA Huts at Camp Bondsteel. Soldiers from the U.S., Poland, Romania and Turkey make up Multi-National Battle Group – East, one of the battle groups from NATO’s peacekeeping mission called KFOR. | Photo: Valerie Plesch.

Upon entering the multiple layers of security, a drive down winding roads and past rolling hills leads to the main area of Camp Bondsteel where rows of brown wooden housing units called SEA (Southeast Asia) Huts line the main area of the base. Soldiers live and work in these Huts and Albanian shopkeepers sell antique souvenirs and military tactic clothing. A huge volleyball court still filled with sand lies in the main area, next to the dining facility called the DFAC where Albanians from Ferizaj and surrounding villages have served soldiers since 1999.

Then there’s Ilir Geci’s Guitar shop, perhaps the most popular place at Camp Bondsteel for soldiers to spend their free time.

“The first impression is that it looks like a guitar shop, but in reality it is a little place where international cultures interact,”Geci, said to Prishtina Insight, while cradling one of his guitars. The shop owner is crammed with guitars and amplifiers and framed photos of him with American soldiers and paintings and caricature portraits done of him adorn the shop. 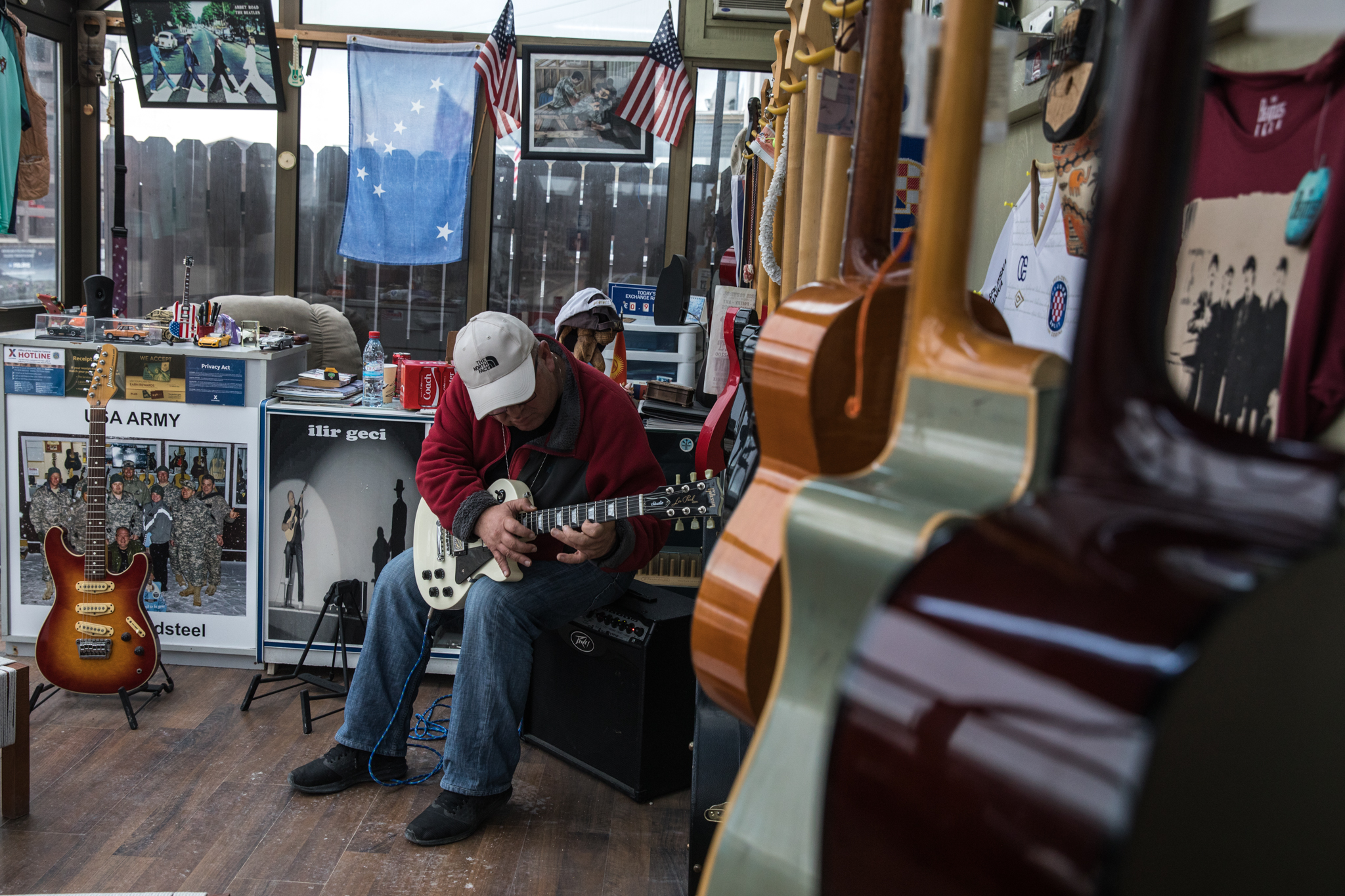 He created a living room atmosphere so soldiers could feel at home while stationed away from their families. Impromptu jam sessions are known to have taken place here.

Geci’s shop has been at Bondsteel for 15 years and he’s seen every rotation of soldiers and American VPs come through since then.

“I’ve met people from every US corner,” he said. “Of course it is a big honor for me whenever we have guests from the US like senators or generals who come and see one little place like this.”

Besides selling a range of guitars at his shop, Geci provides guitar lessons to the soldiers and has even formed bands with them over the years.  He estimates that around 30 to 40 soldiers from every rotation sign up for lessons at his shop.

He rattles off some of his favorite American and British artists: John Mayer, Dave Matthews band, John Mellencamp, Simon and Garfunkel, Pink Floyd and Dire Straits.  “I grew up with Jack and Diane,” said the 51- year-old.

Geci admits his style of playing American music was “influenced from Alaska to the South” thanks to the soldiers who have served in Kosovo.

“Musically, north and south is a big difference, and now the way how I play – I may not realize it myself – but I have influences from all over. It was a unique chance for me to meet Americans from all parts.”

He hopes to play the ukulele again with the new group of soldiers, some of whom brought the lute-like stringed instrument from Hawaii to Kosovo.

Elsewhere at the camp, there’s a PX, or retail store, that is fully stocked with American brands that cannot be found anywhere else in Kosovo. 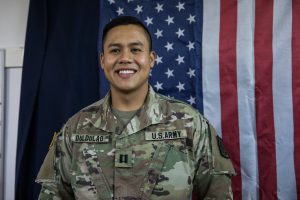 Back in one of the SEA Huts is Captain Randall Duldulao, 29, a civil engineer who just returned from a meeting at Film City in Prishtina, another KFOR base. It’s also his first deployment overseas.

“I’m super happy with this deployment. It’s going to be hard going to another deployment after this I think, especially being pampered with buildings, running water… you might have to go to Afghanistan… it’ll be tough.”

He also does the shaka everywhere he goes.

“I feel like there’s a type of Aloha spirit here, everyone is just very nice and very helpful”, he said to Prishtina Insight. “Kosovo people are super supportive and nice, every time we walk out in this uniform, they’re always saying hi or wanting to take a picture.”

The sympathy for the U.S. Army uniform is not only connected with 1999 events but with the continued U.S. support towards Kosovo. “The US Army stopped the killing of people and this is why they are appreciated,” Geci said. 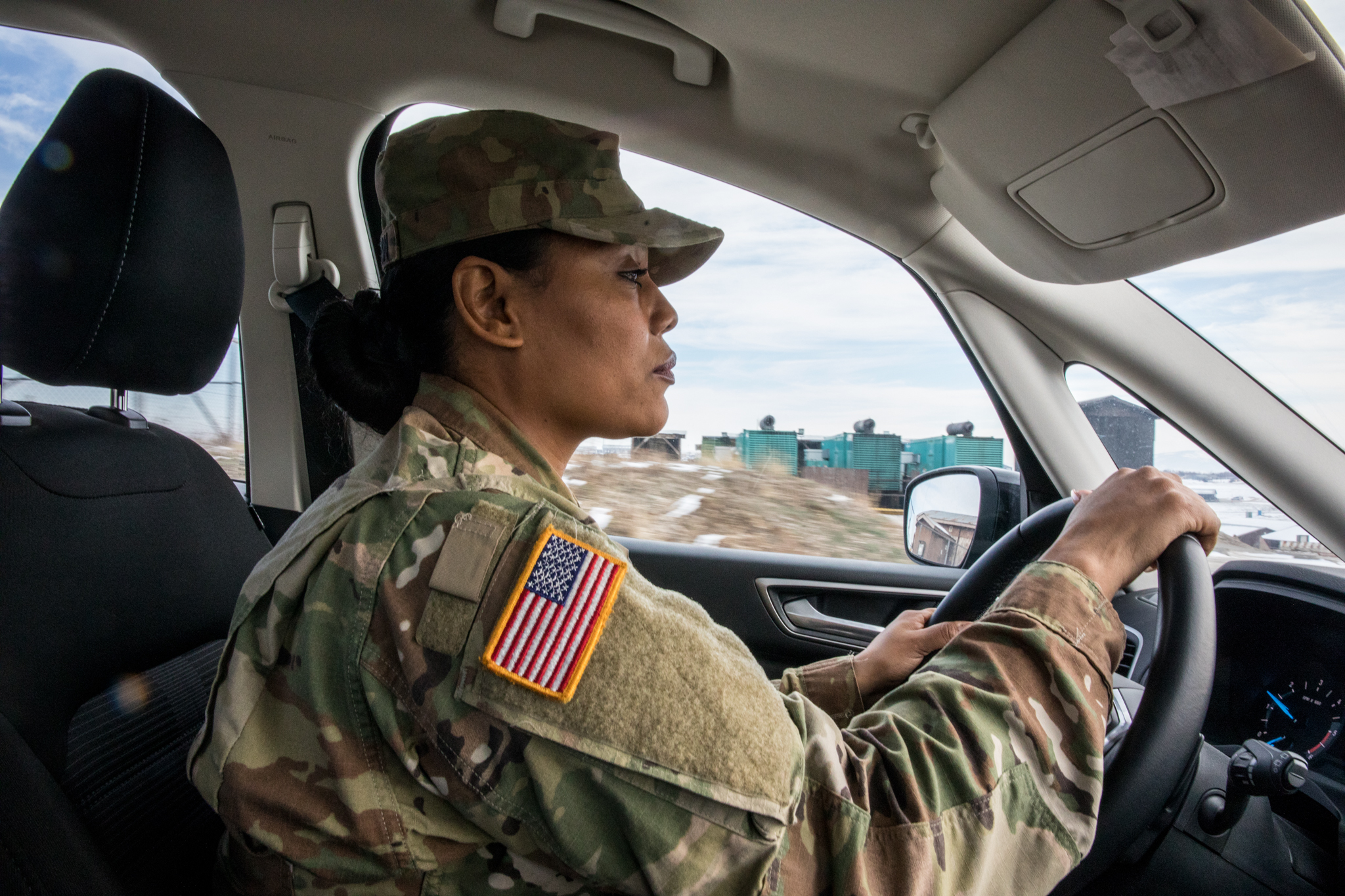 A few days before Kosovo’s parliament voted on the final package of laws for that would allow for the Kosovo Security Force, KSF, to expand into a national army, Mother Teresa Boulevard in downtown Prishtina was lined with American flags as a token of gratitude for the US government’s support for Kosovo’s first army.

Almost twenty years after the end of the war, the US is still regarded as Kosovo’s biggest supporter as it transitioned from an occupied province to an independent nation. Although the KSF might protect Kosovo’s sovereignty in the future, it seems unlikely that the presence of NATO troops and American soldiers will ever diminish from this part of the Balkans.

by Fitim Gashi
Next: Features