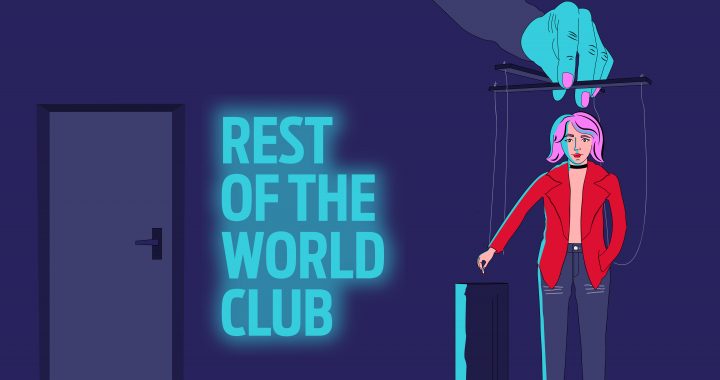 Kosova is about to turn 12: the growing pains of an adolescent struggling with a past she is scared to confront, while others control her every move, she grapples with the future and accepting that her journey to ‘becoming’ is just as important as the destination.

Kosova, a female-born creature of the Anthropocene, views herself subjectively. This is understandable, as she is both dominated by and dependent on her inhabitants when it comes to her well-being. They are a rather oppressed, traditionalist branch of humankind, caught at the crossroads between greater powers and competing interests.

Sometimes, she wishes she could transport herself to some far away land, Scandinavia, maybe. She is not sure if this is an original idea she thought of herself, or whether she heard about it somewhere else.

Other awkward ideas come to her every so often, and she is never sure where they come from. She believes in reincarnation and is trying to utilise meditation and similar practices to figure out who she was in her past lives.

Kosova is 12, not yet a teenager. The symptoms of coming of age that she is experiencing are justifiable, considering the rocky road she has been through during the process of ‘becoming.’ This becoming, she observes, appears to her as it is understood by Heraclitus, and she has concluded that nothing in this world is constant except change.

Kosova chain smokes in clubs like there’s no tomorrow, bouncing her freshly washed pine-scented hair to deafening electronic music, despite having just finished the five kilometer run that she has ingrained in her daily routine. She laughs out loud and sings along, wearing a custom-made red leather jacket with no bra underneath, the shape of her newly-formed breasts clear as day.

Throwing her hands up in the air, she reveals her belly, drawing in lustful gazes from those around her. She is driven by the appearance of total self-confidence, successfully hiding the complete lack of it inside her.

She wears light make-up to cover her natural blemishes, just like the stylish Italian women she sees catwalking down the streets of Milan. This she has learned to do from looking at pictures of her mother, who abandoned her in another lifetime.

There’s not much to cover up really, as her face still bears the milky softness of a twelve-year-old – just the long, horizontal scar across her throat, which she hides with thick beaded necklaces and turtlenecks that make her look much older than she is.

Lots of rumors about her scar float around. The two most extreme camps of speculation are that of suicide and homicide: the former stems from the belief that she was trying to put an end to her past trauma, and the latter a result of her subversive behavior towards the maquereaux who control her freedom, those who claim to have bought her freedom for her in the first place.

Her drinks are always paid for, before she even arrives at whatever bar she decides to go to. Sometimes she feels like a marionette, hanging by strings, her gestures, actions and reactions controlled by invisible hands whose presence she can always feel.

Just like her inhabitants, she is incapable of traveling. Her style, behavior, thoughts and feelings are derived from earthly roots, drawing inspiration from signals she is unable to verbalize, but is able to subconsciously decode in a rhizomatic fashion.

In her daily life, most of what she is able to recognise and understand comes from a shady, smooth space in her mind which seems to have always been there. She doesn’t know when it arrived, or how. The past comes back to her in flashes, usually under relatively mundane circumstances, as she passes by construction sites or gazes through the windows of storefronts in shopping malls.

These window displays sometimes remind her of archaic machines that were operated by hand, of people dressed in blue – somehow, she knows they are uniforms. These intense visions fade quickly and leave her exhausted and socially anxious, after which she spends days, or sometimes weeks indoors, tormented by what she has seen.

She lives in a very small room with a shared bathroom that is paid for by one of her invisible maquereaux. His presence is palpable, but she has never actually encountered him. She is sure it is a he. She just knows.

Kosova often wonders if her mother has made some kind of agreement with these invisible men, whether she has promised them full access to her. ‘For how long though?’ she wonders. In her paranoia, she is convinced that she may suffer from an Electra complex.

Unable to withstand the delirium any longer, on her 12th birthday, Kosova has decided to quit smoking, drinking and partying: she can’t do anything in moderation, even her running has become obsessive. Kosova decides to consult a psychotherapist, but the hidden knowledge from her past lives that she has been seeking, which sometimes spring to the fore to torment her, inform her that psychoanalysis is passe.

She has found a rather patient therapist of good repute, known for expertise in transforming past trauma into constructive approaches towards the future. During her first session, she talked about the visions of the past she has had and, to her surprise, ends up questioning her gender. True to the stereotype, the therapist was sitting on an armchair, just listening, after having asked one single question: so, can you tell me about yourself?

As she continues speaking, Kosova has a revelation – that she has been detached from her inanimate self since birth. She is tired of being defined by her humanity alone. Realising that everything that surrounds her is a part of her, and she a part of them, she stops eating meat and starts studying plants and different ecologies.

Undergoing a transformative awakening, she has decided to observe the self objectively and claim her queerness. Her pronouns are now they and them. Observing themself from the outside feels like nothing they have ever experienced before: a process of deterritorialization and the breaking of old habits.

How ‘they’ were placed within the convention of femininity is unknown to them, other than that doing so is based on the human-centric assumption that names ending with an ‘a’ and an ‘e’ are mostly designated to female-born creatures.

She – pardon, they – have decided to self-educate and in doing so, have begun to devote some time to studying phenomenology. Mysterious knowledge keeps occurring to Kosova quite accurately.

Instead of suffering as a result of its strategic, geo-political position, which holds Kosova hostage to multiple maquereaux, an automatic decision to learn how to flip the mentality of inferiority and utilize their attractiveness to their benefit has revealed itself.

Kosova encounters Sarah Ahmed’s ‘Queer Phenomenology’ and as they read it, they immediately understand what ‘an arrival takes time and the time that it takes shapes what it is that arrives’ means.