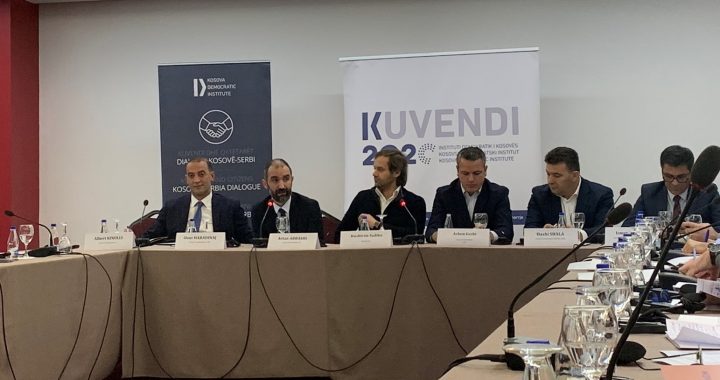 Removing the 100 per cent import tariff on Serbian goods and the possibility of a deal involving territory exchange were debated by newly-elected MPs on Tuesday as part of a round table discussion on the future of the Kosovo-Serbia dialogue.

Artan Abrashi, a newly-elected MP from Vetevendosje, stated on Tuesday that the dialogue between Kosovo and Serbia is ‘on the verge of restarting’ at a round table discussion organized by the Kosovo Democratic Institute, KDI.

Abrashi then outlined the basis on which the new coalition government would approach the dialogue and ruled out signing a deal in haste. “In the new phase we need to be represented with clear and consolidated principles,” he said. “There cannot be an agreement without a dialogue – we do not believe that complicated issues can be resolved simply or quickly.”

Abrashi was quick to rule out any notions of a deal involving a ‘land swap’ – an idea mooted as a potential end to the deadlock in 2018. “There should be no maps. Kosovo’s territory is not negotiable at any phase. This is not an alternative,” said Abrashi.

Abrashi’s comments echo the position outlined by Prime Minister Albin Kurti in a leaked video from an off-the-record meeting at the Munich Security Conference last week, which was attended by Serbian President Aleksander Vucic and the EU’s High Representative for Foreign Affairs and Security Policy Josep Borrell, among others.

In the video, Kurti stated that “to heal the wounds of the failed land swap project” the dialogue must continue with three principles: No deal without dialogue, no dialogue with maps, and no presidents bringing maps to the negotiating table.

Opposition to discussing an exchange of territories as part of the dialogue was echoed later in the discussion by LDK MP Arben Gashi, as well as Daut Haradinaj from opposition party Alliance for the Future of Kosovo, AAK.

“Any efforts made to touch Kosovo’s territory would bring bloodshed back to the Balkans,” Haradinaj said. “Our aim is not to block the dialogue, but to stop Serbia’s old ideas of dividing Kosovo.”

But while Kosovo’s political spectrum now seems largely unified over the issue of territory exchange, the question of the 100 percent tariff on Serbian goods imported to Kosovo imposed by the previous government in November 2018 still causes division.

“This is our aim and promise,” Abrashi added, without giving a precise date when the tariff could be removed.

LDK MP Arben Gashi confirmed that the coalition government is considering removing the tariff to fulfill the demands made by the international community. “By removing the tariff and introducing reciprocity, we will give the dialogue a chance,” he said.

The tariff has been subject to additional pressure from the international community recently, particularly by representatives from the United States. US Special Envoy for the Kosovo-Serbia Dialogue, Richard Grenell, who also serves as US President Donald Trump’s ambassador to Germany, repeatedly urged Kosovo to drop the tariff during a visit in January.

Grenell’s press officer Dick Custin told Radio Free Europe on February 10 that the special envoy also does not support the principle of reciprocity replacing the tariffs. “The ambassador is pushing for them to drop the tariffs with no reciprocity,” Custin stated. “So, Kosovo should drop the tariffs on Serbian goods, and not implement reciprocity. So, no reciprocal measures. Not just suspend the tariffs but drop them entirely.”

Haxhi Shala from the opposition coalition NISMA-AKR declared during the discussion that demanding reciprocity from Serbia will lead Kosovo from one crisis into another.

“If we really introduce reciprocity, which is against American demands, then we will have another crisis with the internationals,” said Shala, adding that replacing the tariffs with a reciprocal policy would not ease the strain on the relation between Kosovo and its international allies.

Haradinaj, whose party AAK campaigned heavily on keeping the tariff at the last parliamentary election in October, repeated his party’s support for its continuation, restating the previous government’s justification for the imposition of the tariffs – the Serbian Government’s “aggressive” campaign against Kosovo’s bids for UNESCO and INTERPOL membership in 2017 and 2018.

“As an opposition party, we are openly against removing the tariff until Serbia recognises the reality in Kosovo,” Haradinaj said.