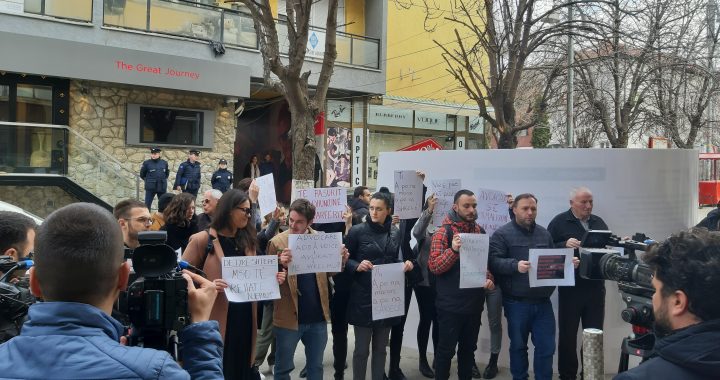 A protest was held outside the office of prominent lawyer Tome Gashi in Prishtina on Monday, after he was filmed in an altercation with a beggar on Mother Teresa boulevard last week.

After a video of high profile lawyer Tome Gashi arguing with a beggar and kicking his belongings on Prishtina’s main boulevard became widely publicised last week, human rights activists organised a protest outside his office on Monday demanding professional and criminal accountability.

The protest was organized by the Youth Initiative for Human Rights – Kosovo, YIHR, who called on demonstrators to protest against abusive behaviour and protect the fundamental right to dignity. “YIHR strongly condemns the abusive behaviour of lawyer Tome Gashi, and will always continue to be against such acts of violence,” the announcement for the protest read.

Gashi has been unrepentant since the video showing him arguing with a beggar, before kicking the man’s money bowl, made the national media on February 14.

“I don’t see any reason to apologise for kicking a plastic bowl – this seems to be a crazy thing,” Gashi told Klan Kosova’s Info Magazine on Monday.  “If there has been violence there, then, I have no knowledge of what violence means.”

Speaking to Prishtina Insight, Trina Binaku of YIHR said that the protest was targeted towards people who believe they are above the law. “We think that because of his wealth, he has given himself the right to act as such,” she said. “Someone else would have been arrested.”

Banners stating “Kick out privilege not the unprotected” and “the rich violate the poor” were seen at the demonstration.

Gashi has repeatedly argued that beggars operating in Prishtina are part of organised criminal groups, claiming he was doing the work of Prishtina’s municipal authorities responsible for policing the issue. “These [beggars] have bosses with Mercedes and over the last two years have shown to be more organised than the Prishtina Inspection,” he wrote on Facebook on February 14 alongside the video of the incident, before later deleting the post.

Before demonstrators arrived outside Gashi’s office on Rexhep Luci street, an installation displaying media coverage of cases involving trafficking and begging was erected.

The lawyer has received criticism from his colleagues over the incident. Head of the Prishtina branch of the Kosovo Bar Association, Nasuf Hasani, described Gashi’s behaviour as “unacceptable and inhumane.”

“Begging is not prohibited by law [..] and no one has the right to humiliate them by kicking their belongings,” Hasani said. “Such conduct from lawyers damages the honor and reputation of the legal profession, and is clearly in violation of the Bar Code of Ethics.”

Triana Binaku from YIHR told Prishtina Insight at the protest that “the Lawyers Association should scrap Gashi’s license as he violated the code of ethics.” Blende Pira from the same organisation stated that “no one has the right to take justice in their own hands, as [Kosovo] has competent institutions to do that.”

Prishtina Insight contacted Gashi but he was not willing to comment on the protest.