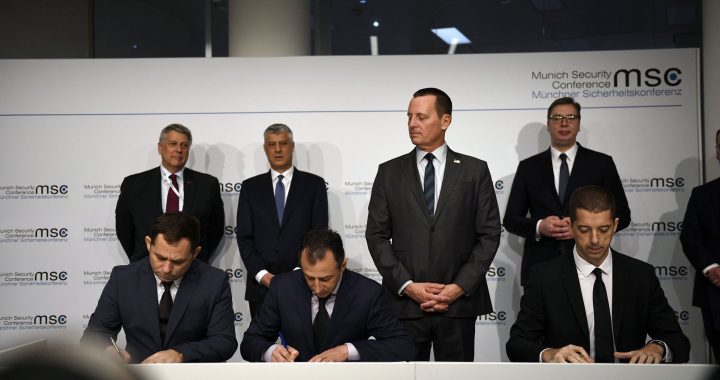 Letters of interest signed in Munich on Friday between delegations from Kosovo and Serbia under US mediation express a willingness to open up road and railway connections between the two countries.

Two letters of interest, one relating to highways and the other to rail travel were signed by a Kosovo and Serbian delegation in Munich on Friday. The agreements express a willingness to reopen existing networks between the two countries, as well to open the possibilities for road and rail connections linking the two states with the Western Balkans region and the EU.

The letters of interest were signed under the auspices of US ambassador to Germany, Richard Grenell, who is also the newly appointed US special envoy to the Kosovo-Serbia dialogue, while Serbia’s President Aleksandar Vucic and his Kosovar counterpart Hashim Thaci headed the two delegations.

Also present were US Ambassador to Kosovo Philip Kosnett, the Head of Serbia’s so-called Office for Kosovo and Metohija, Marko Djuric, and Rame Qupeva, the head of the Road Management Department at Kosovo’s Ministry of Infrastructure and Environment.

“Firstly, I would like to thank Ambassador Grenell for making this agreement possible,” Thaci stated after the letters were signed. “Today’s agreement on railways and highways is the best message that the region will have the peace, economic development, progress and jobs that our people in Kosovo and Serbia need.”

Thaci went on to thank US President Donald Trump, who he stated has been working on a final Kosovo-Serbia agreement. “Kosovo believes in the leadership of President Trump and the administration that, throughout this period and this year, have been working on the final Kosovo-Serbia agreement,” he continued. “This is the path we must follow in the future, and we must not be held hostage to the bitter past between our countries and peoples.”

In a tweet posted after the meeting, Vucic also thanked President Trump, stating that the letters of interest “will create a better future and ensure peace for the coming decades.” The US embassy to Germany meanwhile, described the agreement as “historic.”

Another milestone! First, the deal on air traffic & today we signed the deal on railways & highways b/w Kosovo and Serbia. Thank you @realDonaldTrump for your leadership, and @RichardGrenell for the resolve. A great step towards reaching a final peace agreement b/w two countries pic.twitter.com/ujmNXf71fS

The deal was signed prior to the 2020 Munich Security Conference that will begin on Friday, and gather hundreds of politicians from around the world to discuss global security and foreign policy issues. On Thursday, Kosovo Prime Minister Albin Kurti publicly invited Thaci for a meeting before the president headed to Munich in order to “coordinate” over Kosovo’s foreign policy plans. Thaci flew to Germany without meeting Kurti, who traveled on Friday to Munich to participate in the conference.

In January, Kosovo and Serbia signed another letter of interest under Grenell’s mediation, related to the possibility of opening direct flights between Prishtina and Belgrade. However, the full details of the deal were never made public and it is uncertain when direct flights are expected to be launched.