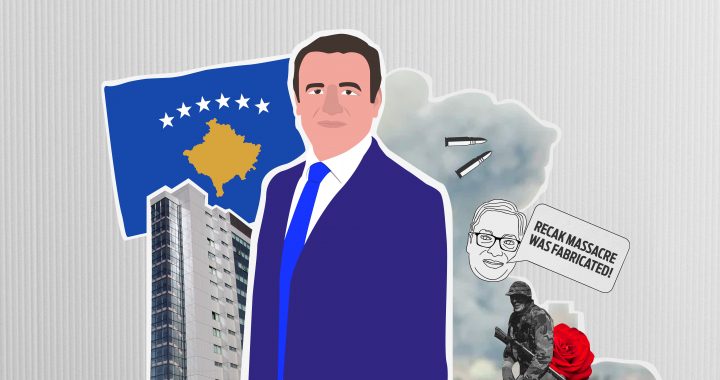 As the Kosovo state enters a more mature phase, its new leader, Albin Kurti, must not repeat past mistakes – and forge a more equal relationship with Serbia and the world.

Next Monday marks 12 years since Kosovo declared its long-fought independence from Serbia, and Kosovo’s teenage years begin with high hopes now that Albin Kurti has been elected Prime Minister. Kurti, although a well-known face, represents a fresh start for Kosovo, with neither he nor his party, Vetevendosje, having ever held power at state level.

He was elected on an agenda that many in Serbian mainstream media have dubbed “nationalistic” and “populist.” But in the context of Kosovo’s recent history, this is not only wrong, but highly demeaning to the Kosovars who led his party to a first place finish at the October 6 elections.

Kurti’s “nationalism” must not be given a false equivalence with Serbian President Vucic’s nationalism. This only feeds the narrative Serbia so desperately wants to take hold: that all are to be blamed for what happened during the 1990s. Not all “nationalisms” in the Western Balkans are the same, many of them – at least initially – were a reaction to Serbia’s aggressions and the four wars it led under Slobodan Milosevic.

In his first address to the Parliament, Prime Minister Kurti justly said that his government is “ready to sue Serbia over the genocide and war crimes committed during the Kosovo war.” He also promised “full reciprocity in dealings with Serbia” and announced he was ready to “lead the dialogue.”

Now that Kurti leads the Government, President Thaci may finally be restricted to his constitutionally provisioned duties, which are mainly ceremonial. Thaci has long been seen as the Alpha and Omega of Kosovo politics, especially when it comes to the dialogue with Serbia. Hopefully, for Kosovo’s sake, that’s about to change.

With the new Government, Kosovo has a chance to escape the rule of those who have built public support on deadly policies and legacies from the 1990s, as is the case with many of its neighbors. This is because Kurti is rare among the prominent public servants of the Balkans – someone who suffered during the war, not a suspected war criminal or perpetrator or a random thief.

On the other hand, Kosovo’s new prime minister should not make promises that he can’t keep. His new government has a moral obligation to do exactly what he has pledged, or Kurti will become another leader of Kosovo that spits in the faces of countless lives just to score petty political points, as with current President Thaci, who also promised litigation on numerous occasions. Take Serbia to court for genocide and war crimes against your people, Mr. Prime Minister! The process is long overdue.

As I wrote for the 10th anniversary of Kosovo’s independence, for more than 50 years Kosovo’s people have been subjected to systemic racism, discrimination, humiliation and degradation by Serbia with the silent approval of all other former Yugoslav republics.

This was then followed by a full-blown genocidal campaign organized by Milosevic’s Serbia which tried to obliterate the whole nation. If it wasn’t for the NATO campaign in 1999, Kosovo’s population would have been even more decimated than it is today. Generation upon generation of Kosovars had to accept their seemingly inevitable fate: to be the subjects of others’ mercy.

As we celebrate the 12th anniversary of Kosovo’s independence, and argue why Kurti is right to sue Serbia over its crimes, let us remember at least two of the many who have willingly and unwillingly died for Kosovo’s independence – 20-year old Asllan Pireva and his 19-year old friend Naser Hajrizi. Pireva and Hajziri were two students killed by Serbian police on April 2, 1981, during demonstrations against repressive Serbian policies towards Kosovo. Albin Kurti was six years old on the day of their death. Sixteen years later he repeated the same slogan as Hajrizi and Pireva – “Kosova Republike!” – at another student demonstration against Serbia.

But despite many horrific hardships brought upon him by Milosevic’s regime – Kurti was imprisoned from 1999 to 2001 and regularly beaten and tortured – he survived. Tens of thousands of Kosovars weren’t as “lucky,” and playing with their tragic fate by raising issues like suing Serbia, and then not following through, would forever discredit Kurti and undermine his whole agenda.

Thousands of Kosovo Albanians were killed, raped, or forced to leave their homeland and live in exile during the 1990s. Many are still unaccounted for. This includes children, women, and men – civilians, who were indiscriminately yet methodically murdered.

We also know who supported all of this: The majority of Serbia’s population, who gave support to Milosevic every step of the way, just as they do with Aleksandar Vucic today. At his lowest point, the September 2000 presidential elections, Milosevic was still supported by almost 2 million voters.

Undermining Serbia’s citizens’ responsibility for supporting these deadly policies for decades has to be called out. It is said that Serbs are somehow forced to make these decisions, that they’re ill informed, poor and blackmailed – that no responsibility lies on the collective.

This relativist point of view is shameful and hurtful to the victims and their families, including Serbs that suffered during the war. Serbia was never held responsible for the atrocities it committed, which is why Serbia’s officials and citizens continue to freely express their racism towards Kosovars.

Serbia’s bullying of Kosovo is repeatedly perpetuated by Vucic, his media, his government, and his opposition. Maybe more significantly, the poison lives on in Serbian schools. It is an inseparable part of Serbian public life, appearing everywhere from culture to sport.

These racist attitudes towards Kosovars are still openly expressed by both the government and citizens of Serbia. You can see them daily on front pages, in textbooks, in popular culture, and in every single sermon in churches of the Serbian Orthodox Church, Milosevic’s wartime pillar. Because of this, it is no surprise that Kosovo Serbs, also victims of these same policies, continue to cherish this legacy and support Milosevic’s successors.

I once argued that Serbia’s nazi-like policies towards Kosovo have essentially stayed the same for the last three decades: Kosovo is Serbia’s colony, no crimes have been committed (except against Serbs), there is no need for remorse, justice, reparation or apology of any kind by Serbia or its people.

But in contemporary Serbia, telling the truth about the devastation the Serbian state has inflicted on millions of non-Serbs amounts to anti-Serb propaganda. Official Serbia’s behavior remains unchanged, and follows Milosevic regime’s direction: There will be no exceptions when it comes to the crimes Serbia has committed.

All Serbs have to fall in line with this fabricated narrative: that Serbs, and Serbs alone, are the victims, that Serbs’ rights are threatened at all times, in Kosovo, in Bosnia, in Croatia, and most recently, in Montenegro. Everybody who says differently is a traitor, a foreign mercenary, an anti-Serb.

All of this is Serbia’s problem, not Kosovo’s. But Kosovo should not aim to make Serbia feel better by forgiving and forgetting its countless victims.

Kurti is right not to cover up the still open wounds by turning a blind eye to what has been done to the people he leads today. On the contrary, Kosovo, as Kurti has suggested, should be on par with Serbia, and with everyone else. Kosovo is no one’s colony anymore.

This also has to be accepted by Kosovo’s declared supporters, particularly the EU and the US, who should stop humiliating Kosovo with their endless demands, which threaten to trap Kosovo’s people inside a ghetto once again. It’s about time that the West respects the Republic of Kosovo as it would any other sovereign state, as they respect their own.

Let us remain hopeful that Kosovo’s prolonged and traumatic childhood finally ends, and wish for Kosovo’s teenage years to be full of righteous angst and persistent growth, that will lead all of Kosovo’s people towards an open, healed, united and prosperous society. Gëzuar ditën e Pavarësisë Kosovë, dhe paç fat!

The opinions expressed in the opinion section are those of the authors only and do not necessarily reflect the views of BIRN. Media outlets which decide to republish this article must credit Prishtina Insight and include a link back to the article’s URL .