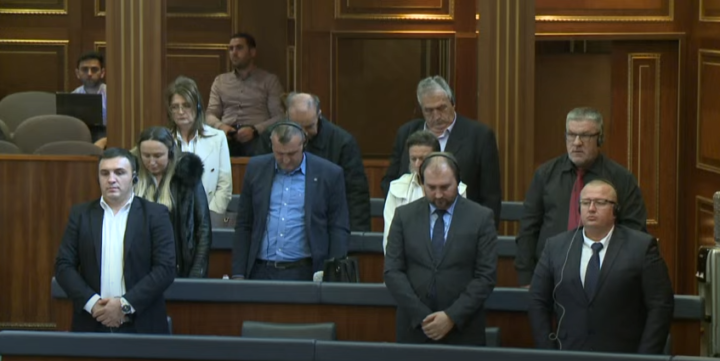 MPs from Srpska Lista, the Belgrade-backed party representing Kosovo Serbs, took the oath at Kosovo's parliament, replacing their colleagues who quit in protest in a mass resignation by Serbs earlier this month.

Nine MPs from the Srpska Lista took the oath at Kosovo’s Parliament on Thursday to secure their mandates despite the party continuing to urge the mass resignation of Serbs from all Kosovo institutions in the four Serb-majority municipalities in the north of the country.

“We emphasise that this strategic and political decision will in no way stop the process of leaving the institutions of Kosovo in the north of Kosovo,” Srpska Lista said in a statement.

The nine MPs from Srpska Lista are replacing the ten previous MPs who resigned on November 7 as part of a mass resignation that saw Serb police, mayors and judicial officials resign from their positions in the four Serb majority municipalities in the northern part of Kosovo.

Immediately after taking the oath, the new Serb MPs left the parliamentary session.

Srpska Lista launched the mass resignations because it alleged that EU-mediated agreements between Serbia and Kosovo are being breached. It is also angry about the imposition of Kosovo vehicle licence plates on drivers with Serbian-registered cars.

Rada Trajkovic, who was a candidate for parliament as part of For Freedom, Justice and Survival, which was the second most popular Serb party in last year’s elections, accused Srspka Lista of accepting the new mandates on Thursday only to stop other Serb politicians in Kosovo from entering parliament.

“I have just been informed that the Srpska Lista has taken over nine new mandates in the Kosovo Assembly in order to prevent me getting in, and to prevent the Serb community in Kosovo from finally getting real political representatives,” Trajkovic wrote on Twitter.

Haxhi Avdyli, an MP from ruling party Vetevendosje, wrote on Twitter after the Serb MPs accepted their new mandates that Kosovo is “a European multi-ethnic model state where Serbs remain the most privileged minority in the political and social sphere”.

Ten seats in the Kosovo parliament are set aside for representatives of the Serb community.

Srpska Lista had 20 candidates at the last Kosovo parliamentary elections and won all ten Serb seats.

However, it lost one of the seats because one of its candidates, Ivan Todosijevic, was convicted of inciting ethnic hatred for stating that the 1999 massacre of Kosovo Albanians by Serbian forces was “fabricated” by “terrorists”. He was then replaced by another candidate, who also resigned on November 7.

The tenth MP is from the same party as Trajkovic, For Freedom, Justice and Survival. It is the first time since 2013 that Srpska Lista doesn’t have all ten reserved seats for Kosovo Serbs in parliament.

Srpska Lista said on Tuesday meanwhile that it will not participate in the extraordinary local elections in the four Serb-majority municipalities – Zvecan, Leposavic, Zubin Potok and North Mitrovica – on December 18.