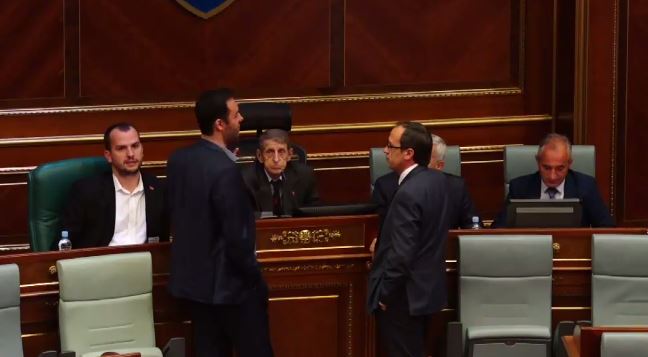 The Kosovo Assembly failed to vote on speaker for the fifth time in a row, leaving the country’s highest institution in disarray. The political stalemate entered the third week as the PAN coalition continued its boycott, making it impossible for the Assembly to appoint the speaker and the presidency.

Since a failed vote on a suggested break requested by PAN on August 3, the coalition MPs have been boycotting the Assembly. As the biggest subject in the June 11 elections, PAN maintains the exclusive right to nominate an Assembly Speaker according to a 2014 Constitutional Court decision.

PDK leader Kadri Veseli indicated that he is willing to relinquish his candidacy for Assembly Speaker, but on the condition that all parties agree to vote for a Ramush Haradinaj government, a suggestion that was met by irritability from Vetevendosje and LAA coalition MPs who have called the request absurd and ridiculous.

“This is the same session as the August 3rd one, which still continues, and is unable to be closed because of the boycott from the PAN coalition,” said Glauk Konjufca, Vetevendosje representative on Monday. “This is a typical strategy of how [PAN] behaves and has always behaved, politically.”

Avdullah Hoti, the representative of the Democratic League of Kosovo, LDK, suggested that parties should convene to discuss a potential query to the Constitutional Court.

“Our group is working on organizing a debate together with Vetevendosje and the minority groups to take concrete steps to stop this blockade,” Hoti said. “In the name of our parliamentary group, I invite you to a roundtable in the next few days to draft questions for the Constitutional Court.”

Session leader Adem Mikullovci, a Vetevendosje MP, proposed a final consultative meeting with PAN to be held on Wednesday at 10 am.

“We need to have a talk will all parties in the Assembly. Vetevendosje is not in favor of such a meeting, but I propose to meet for another consultation. This is the last time,” Mikullovci said, adding that the only topic on the agenda would be the assembly session date.

The stalemate was also commented on by the diplomatic corps in Kosovo, with embassies of France, Germany, Italy, the United Kingdom, and the United States releasing a statement on Sunday evening, calling for an end to the blockade.

“It is the responsibility of Kosovo’s leaders to form these institutions, but also to make the necessary reforms to prevent similar deadlock in the future,” the statement read. “An important first principle is that deputies elected to the Kosovo Assembly should attend Assembly sessions and allow its work to begin.”