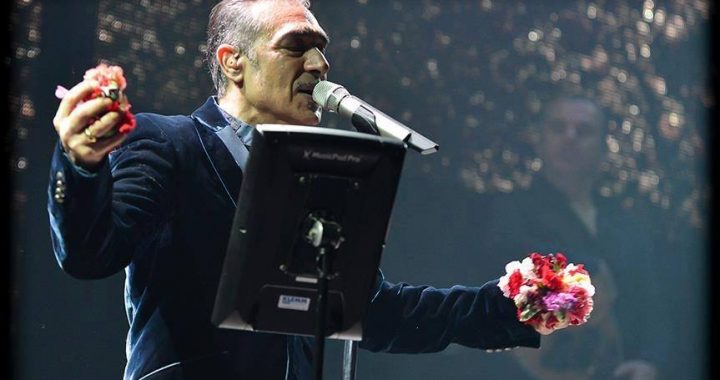 Can you love the artist when you hate the fascist?

Notis Sfakianakis’ concert in Tirana raises questions whether the Albanian capital should welcome the artist despite his far-right and anti-Albanian political views.

It is a typical spring day in Tirana: plants and people are blossoming, clear skies and some bright sun watch over the heavy traffic and the city life.

While going about your day, which can often include dodging ads when possible, there is a stubborn one that keeps popping up in every medium: the concert of a Greek singer – Notis Sfakianakis – in the country’s biggest Concert Hall. At first sight, this does not seem unusual: Greece is Albania’s southern neighbor and an estimate of 700,000 Albanians live and work there. Many Albanians within the country are very familiar with Greek culture, understand the language and listen to Greek music. Sfakianakis sings folk music, and has enjoyed a significant share of fame for many years within Greece and Albania too.

Then another unusual thing hits you when you look beyond the ad. First, the price of the ticket, which ranges from 80 to 160 euros. Although this falls within the normal price range for renowned global artists, it is probably the most expensive concert ticket ever sold in Albania (and although popular, Sfakianakis is hardly a global star).

As the ad keeps popping up everywhere, so does the outrage from Albanians who know Greece from within. Notis Sfakianakis’ music reached Albania, but apparently his political views somehow escaped the organizers; or perhaps they did not care.  Sfakianakis is a vocal supporter of the Golden Dawn – Chrysí Avgí, an ultranationalist far-right political party in Greece. In an online video, Sfakianakis declared that he has never voted in his life because all politicians failed him and Greece, until he found the Golden Dawn.

Although the party rejects the description, Golden Dawn, led by Nikolaos Michaloliakos, has been described as a neo-fascist and neo-Nazist party.  The party’s agenda is imperialist: Golden Dawn’s main objective is to expand the Greek territory into Southern Albania (which it calls “Northern Epirus”), all the way to Macedonia, Bulgaria, and it aims to conquer once again Constantinople (or as we know it – Istanbul) through war with Turkey. If the party would have its way, they would expel any Slavic speakers from the territory of Greece and get rid of any trace of Muslims by ‘combat.’ And it goes without saying that they would make the expulsion of all illegal immigrants mandatory (sound familiar?).

The party is spread across 32 cities including Cyprus, and just like other similar far-right parties, it is notorious for violence, football hooliganism, and plain old racism.  Party members and supporters constantly attack leftist individuals or organizations, immigrants, and disrupt peaceful gatherings that are against their views — also, a member was accused in 2013 assassination of a hip hop artist Killah P, Pavlos Fyssas.

Despite this, or perhaps as a result of, in 2015, Golden Dawn became the third biggest party in Greece, winning 17 seats in the parliament.

Judging by their agenda, it is clear that Albanians are no favorite of the party. In a television programme, the ideologue of the party Christos Pappas is seen holding the Albanian flag and explaining how Albanians stole  the double-headed eagle and the color scheme  from Byzantine symbols. According to the party, Albanians have built a fake state with stolen heroes, stolen symbols, and stolen colors.

Let’s zoom back to Tirana, the capital of Albania, where days before Sfakianakis’ concert, the advertisement stirred up a very important debate.

People, including yours truly, became vocal opponents of the concert and eventually it became difficult to ignore our calls. The artistic community had stories to tell, as did the immigrants. According to Albanians who live in Greece, Sfakianakis has referred to Albanians as ‘garbage’; and once declared in a radio talk show that he will never step foot in Albania even though he has many fans there. These sort of stories are endless.

In the light of this appalling evidence, it is almost impossible to remain indifferent to the concert, which was held on Thursday night in Tirana. Why would citizens pay the most expensive ticket ever, to the most openly fascist artist to step foot in Albania?

Sfakianakis’ concert opens a very important discussion. In 2018, now that human rights matter more than ever, the least one could do is to boycott the art of a fascist, wherever he might be from or whomever he might hate.

But in Albania, taking a political stance when it comes to an artist falls on deaf ears. Some argued: “It is just a concert. Can’t we simply enjoy it?” Well, my own concern is that by supporting a concert in Tirana today, I have no guarantee that I am not giving money to a fascist organization outside of Albania tomorrow.

Whilst it remains true that we should judge the artist by their art not their character, it is also true that being an artist will not stop them from climbing up the political ladder, when given the opportunity. For example, the current Albanian Prime Minister, Edi Rama, is a former artist himself, and the famous bodybuilder/actor Arnold Schwarzenegger was the Governor of California for eight years.

Some others lamented: “We Albanians thrive on nationalism.” Well, I very much second that. To all of those who reduced the opposition to this concert, into some Albanians against Greeks dispute, I have to say, you have failed miserably.

Sfakianakis’ concert should be opposed because of his support to a neighboring fascist party, which has been very transparent about its intention to use war and force to fulfill its territorial claims on Albania. If this makes me nationalist, so be it, but I’d also have to add that I did not notice when the definition of nationalism changed.

And last but not least, that same old argument that I heard so many times: “Well, since he is coming in Albania he maybe changed his views.”

Well, Sfakianakis’ fame has been declining, Greek artists boycott him because of his political views, and he is spending less time singing and more time in politics. Looks like we have to state the obvious: money and a degree of fame must have drawn him to Tirana, which at the moment is more important than the party he supports.

I followed the progress on the concert closely, and it seems that the organizers realized the mistake a little too late. Days ahead of the concert, they claimed the concert was sold out, but the untruthfulness of this statement could be verified by anyone with access to internet as there were tickets available for purchase.

The lack of success was also manifested when two days before the concert, prices dropped by 50% for most seats, as a desperate push to fill the Concert Hall, rather than cancel the event entirely.

Even though the concert took place, essential evidence such as the aggressive marketing, the empty seats and the last minute sale, show that Albanians did not welcome the renowned artist as expected. If anything, this event marked an important point for political consciousness amongst the Albanian public, which, much to Kosovars’ chagrin, had previously welcomed Goran Bregovic, a controversial Bosnian artist.

2018 taught us on numerous occasions that you can boycott an artist you love if they show traces of inhumanity. Albania is not behind in this regard, no matter who exerted the force to make this concert happen.

Correction May 25, 2018: A previous version of this article falsely identified Goran Bregovic as a Serbian artist. Bregovic was born in Sarajevo, Bosnia and Herzegovina to a Croatian father and Serbian mother, and identifies as Bosnian.