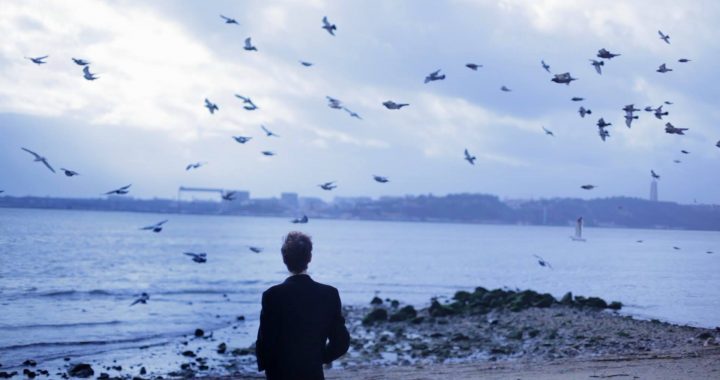 A still from Sarabande. | Photo courtesy of Kaltrina Krasniqi.

Sarabande, a short documentary about the award-winning classical guitarist from Kosovo, Petrit Ceku, set to screen in Prishtina on Friday.

As the subtle crackling from the news broadcast extends across the narrow dining room, a casually dressed Petrit Ceku, as if to elegantly hide the fact that he is an acclaimed guitar virtuoso, modestly helps to set the table. A calm and wintry Prizren marks the start of a trip distinguished by artistic explorations into notions about time, space and exclusion.

Sarabande, a documentary directed and written by Kaltrina Krasniqi, a Prishtina-born filmmaker and author of short films such as The Canaries Know and Sex, depicts the intimate musical journey of Ceku as he travels to Spain to record Johann Sebastian Bach’s Cello Suites, a series of classical compositions from the 18th century.

Having already won its first award for best documentary in Glasgow’s Monthly Film Festival in early May, Sarabande will have its first screening in Prishtina on Friday at Cineplexx Kosovo as a pre-event to the ReMusica festival.

Closely followed by Krasniqi, whom he has known for over 10 years, Ceku starts off from his hometown of Prizren and gradually makes his way to Avila, Spain to record his rendition of the well-known compositions by Bach.

“It was very special for him because classical music performers hesitate to be recorded, they are more focused on having their performances be… in a way, temporary,” Krasniqi said.

Ceku, an award-winning classical guitarist who developed most of his career in Croatia, worked together with his professor and cellist Valter Despalj to rearrange the pieces for classical guitar.

“He invited me to accompany him [and] I was very enthusiastic because it seemed like a very specific moment in Petrit’s development and I wanted to be close to him and see how this process unfolds,” Krasniqi said. “He felt that he experienced a kind of growth at that moment, and he wanted to record it.”

The main obstacle was for Krasniqi to enter Spanish territory: since Spain does not recognize Kosovo, it is next to impossible to get a visa or set foot in the country.

“I cannot go to Spain, but Petrit has Croatian citizenship. The journey became complicated because we started in Prizren, went to Zagreb, then to Lisbon, and then to Spain. I actually entered Spain illegally, but I wasn’t interested in dramatizing that fact,” Krasniqi said. “Naturally, there was a sort of panic, but I did not really feel it at the time because I was very enthusiastic about what was happening.”

Krasniqi said that Ceku’s case is specific because of his life story and the contrast between his hometown Prizren and Zagreb, where he consolidated his career as a musician. This contrast has influenced his art, according to her.

“He performs a music which is part of the Western tradition, but he himself was raised in a very Eastern tradition. It is very beautiful to see how those two complement each other through him, and how attractive it can be to study a different tradition as deeply as Petrit does,” she said.

The name of the movie, Sarabande, derives from the compositions that Ceku recorded. Each of the six solo compositions contains six self-sufficient divisions called movements, and one of them is always a Sarabande — a dance in a slower metre.

The dance originated from the native peoples of Mesoamerica and became popular in the Spanish colonies around the 16th century before being brought to mainland Spain. It was banned in Spain in 1583 because it was considered fast and indecent by clerics. In the Baroque period, Sarabandes were modified to suit the style and pace of the classical tradition.

“Every piece reworked by Bach is slow and meditative, and it seemed to me as a modest and cute analogy to our current situation,” explained Krasniqi. “I have the impression that we have been historically reworked to be ready for the world that we aspire.”

Krasniqi said that Sarabande does not differ much from her previous films since it deals only with the period in which the movie was shot, and does not endeavor to convey a conclusive portrait of the protagonist.

“It was natural during that journey for Petrit to travel to his past, but it wasn’t important for me to create a grandiose narrative of [his] life,” she said, adding that she was sure that Ceku would record Bach’s suites in the future and by then who he was, will have changed too.

Krasniqi said that the filmmaking process was rather lengthy because of the different aspects that in which Ceku is portrayed within the storyline. Although the recordings in Spain were completed in 2014, the film concludes with a concert that Ceku held in Prizren in 2017.

“It is very intimate, and I had to be mindful about how that intimacy will be portrayed, mostly because I consider that it is very important to be thankful when somebody allows you access,” she said.

Krasniqi said that it was important to her to showcase the relationship that Ceku has to Prizren and the light in which the people of his hometown see him.

“The people come to listen to Petrit because of the love they have for him, more than for the knowledge that they have of him. And, for me it is kind of like an ode to home, because, you go back home with the dreams that do not exactly fit there,” she said.

“The city does not have a hall for Petrit, but it accommodates for a type of love that is very important for me to include.”

Ceku will perform alongside violinist Marc Bouchkov at the opening of ReMusica 2018 on May 27 in Prishtina.