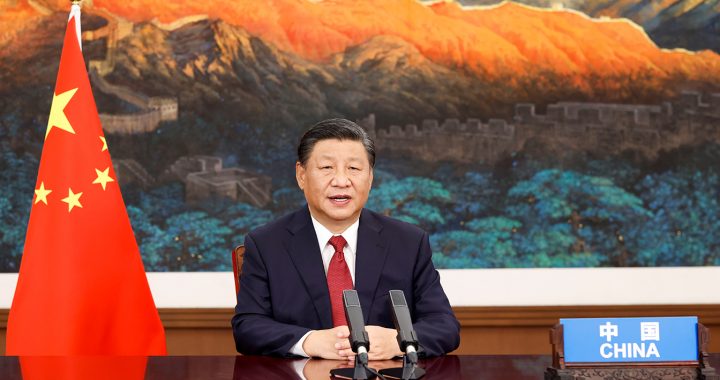 Chinese President Xi Jinping addresses the general debate of the 76th session of the United Nations General Assembly via video, in Beijing, capital of China, Sept. 21, 2021. Photo by Huang Jingwen/Xinhua via Getty Images

China, not Russia, is the greater threat to Kosovo

Kosovo needs a steely-eyed response to the malign intentions of Russia and, more importantly, China, and the US can help.

Today, however, Russia’s influence is waning. China has filled the breach with economic diplomacy; Kosovo and other countries in the Western Balkans should recognise Beijing’s growing influence and guard against its malign activities.

The Western Balkans have been Russia’s strategic priority since NATO intervened to prevent the genocide of Kosovo Albanians in 1999. Russian President Vladimir Putin is still seething at America’s unipolar moment. He is not motivated by Slavic solidarity, but by anti-Americanism and hostility to western liberal values.

Russia and China work in tandem. Premier Xi Jinping and Putin are united through their sense of historic humiliation. They oppose the integration of Western Balkan countries into Euro-Atlantic institutions. Serbian President Aleksander Vucic is a malleable figurehead eager to do their bidding.

China has surpassed Russia as the leading authoritarian influence in the region. It has also replaced Russia as Serbia’s great backer. While Russia seeks to foster chaos and instability, China is systematically taking steps to integrate and control the economies of Balkan countries.

Russia’s influence is diminishing not only in Kosovo, but throughout the region. Montenegro joined NATO in 2017 over Russia’s objections, followed by North Macedonia. Romania blocked Russian arms shipment to Serbia in July 2019. The following year, Serbia cancelled its participation in “Slavic Brotherhood” military exercises with Russia and Belarus.

Serbia and China, on the other hand, have found common ground through China’s Belt and Road Initiative, BRI. Its financing saddles countries with debt and fuels corruption. China benefits by capturing resources needed for its economic growth. Montenegro is especially vulnerable to China’s ravenous drive to control ports and infrastructure.

As cooperation between Serbia and Russia has advanced, security cooperation between Russia and Serbia has faltered. Though Serbia is an observer in the Russian-led Collective Security Treaty Organization, it conducted 13 military exercises with NATO and only four with Russia in 2018. Russia further strained relations with Serbia by transferring six MIG-29 fighter jets, then sending a repair bill of $185 million. Serbs were outraged when a video surfaced showing a GRU officer at Russia’s embassy in Belgrade bribing a former Serbian official.

In 2019, Serbia’s trade with Russia and the Russia-led Eurasian Economic Union accounted for just eight per cent of Serbia’s total trade, with exports totaling 5.4 per cent and imports 9.4 per cent. China is proving to be a better economic partner, providing $4 billion in direct investments and over $5 billion in loans and infrastructure projects.

Huawei, the Chinese telecommunications giant, is an instrument of China’s foreign and security policy. As part of the “digital Silk Road”, the US accuses Huawei of advancing China’s interests by gathering information for intelligence purposes, something Huawei denies. Huawei is facilitated through commercial channels, as well as the Digitisation and Innovation Center in Belgrade. In addition to Serbia, it has an especially strong presence in Bosnia and Herzegovina.

China is also adept at vaccine diplomacy. Serbia initially relied on Sputnik, Russia’s vaccine for COVID-19. Today, it is deepening cooperation with China, using Sinovac in response to the pandemic.

NATO should take in Kosovo by 2028

China’s capacity is overestimated. Xi’s reputation has been tarnished by lack of transparency over the COVID-19 pandemic. China’s economic miracle is slowing down; its economy growing just 6.6 per cent in 2018, the lowest rate in 28 years. Its population is ageing, further slowing economic development. The Chinese Communist Party is comprised of elites, hardly representative of 1.4 billion Chinese.

Kosovo needs a steely-eyed response to the malign intentions of Russia and China. It should launch an inter-agency “Strategic Planning Group on Russia and China” to study their activities and develop a policy and security response.

It needs a regional strategy and communications plan. Kosovo should cooperate with like-minded neighbours to collect and share information. It should also expand cooperation with Western intelligence agencies.

The US can build Kosovo’s armed forces through training and equipment that meet NATO standards. It should consider a Road Map of Defence Cooperation with Kosovo, similar to US agreements with the Baltic states, or a Mutual Defence Treaty, similar to the US agreement with South Korea, to protect Kosovo from external threats.

NATO can play a pivotal role building Kosovo’s capacity, giving Kosovo a fast track to NATO’s Partnership for Peace Program and providing a clear path towards NATO membership by 2028.

As China ramp up their malign operations, Western Balkan countries need a more effective counter-intelligence strategy. China’s peaceful rise is a myth. While Russia is still a menace, China is emerging as the greater threat.

Mr. Phillips is Director of the Program on Peacebuilding and Human Rights at Columbia University. He served as a Senior Adviser and Foreign Affairs Expert at the US State Department during the Clinton, Bush and Obama administrations.