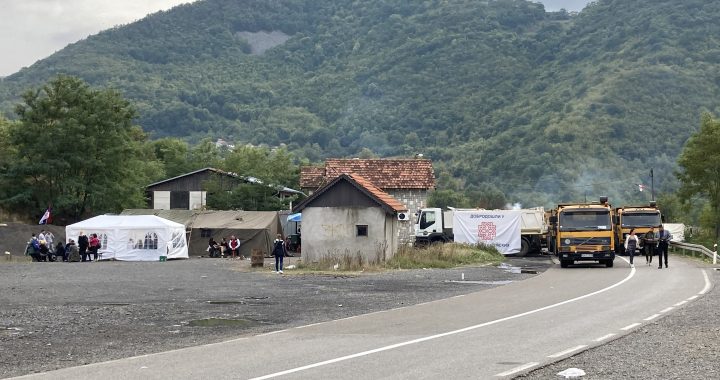 The mood in northern Kosovo remains tense as Serbs keep blockading roads to the border in protest against new regulations imposed on Serbian vehicles while Kosovo police special forces units maintain an armed presence nearby.

It’s 11.30 on Tuesday morning near Kosovo’s northern border crossing point in Jarinje and members of the country’s police special forces units are ready to begin their 12-hour shift.

The special force’s officers who have just ended their shift experienced a calm but cold night in the valley since they took over the night before. But heavy rain made their three-kilometre walk past a series of roadblocks set up by protesting Kosovo Serbs more difficult. As they approached the blockades, the protesters silently made way for them to pass.

The officers spent the night in their armoured vehicles or in an old container installed not more than a kilometre from the crossing point.

“Have a nice day,” one officer tells his colleague as they hand over.

Jarinje and another crossing point between Kosovo and Serbia, Bernjak, have been blocked for ten days now by Kosovo Serbs protesting against new regulations forcing them to change their Serbian vehicle registration plates to temporary Kosovo ones when entering the country, as Kosovo drivers have had to do for years when entering Serbia.

On the day the measure was imposed, September 20, local Serbs obstructed the roads with dozens of trucks. Around 70 trucks have been parked in the middle of the road in six different places near Jarinje, some 90 kilometres north of the capital Pristina.

Most of the trucks belong to publicly-owned enterprises in Kosovo’s Serb-dominated northern municipalities. A few of them have nothing to do with the protest, and were just unlucky to be there and get caught up by it when the roadblocks went up. Now their drivers are desperately waiting for it all to end so they can continue on their way.

The Kosovo authorities argue that the special police units are keeping the crossing point up and running for pedestrians and vehicles whose drivers are willing to use the temporary Kosovo licence plates.

But Serbia’s government sees the armed units as a provocation to ordinary people living in this Serb-dominated area which has often been a flashpoint for incidents over the past two decades.

Only few metres and dozens of trucks separate the armed police from the Serb protesters who are working in shifts too. At around 10 in the morning, people arrive to relieve those who have spent the night in three tents that the protesters have set up across the road. But others also come and go during the day.

The protesters have been supplied with wood for heating and to barbecue food while observing the situation. From a chimney in one of their tents, white smoke rises upwards as those people try to beat the cold.

They conquer the boredom of their routine by chatting to each other but suddenly fall silent when a stranger or a journalist passes by. None of the protesters agreed to talk to BIRN for this article.

The blocking of the crossing point means that bus passengers have to get out at the border and walk for several kilometres until they get to the last barricade.

In the stillness of the day, only the sound of the wheels of the passengers’ suitcases rolling along the asphalt breaks the silence.

Serbia does not recognise Kosovo as an independent state and European Union-mediated talks aimed at ‘normalising’ relations between the two have dragged on for years with little real progress on the ground, as the licence plate dispute has highlighted again.

Licence plates have been a bone of contention ever since the 1998-99 Kosovo war, which ended a NATO’s bombing campaign compelled Yugoslav President Slobodan Milosevic’s army and police forces to withdraw, leaving majority-Albanian Kosovo a ward of the United Nations until 2008.

But even though Serbia was no longer in control of the whole of Kosovo, it continued operating a parallel administrative system for Kosovo Serbs, including thousands in northern Kosovo who have continued to use Serbian-issued licence plates, which begin with the abbreviated names of Kosovo cities, rather than the plates issued by the authorities in Pristina.

In 2011, three years after Kosovo declared independence, Kosovo and Serbia reached an agreement under which Kosovo authorities would issue licence plates marked ‘RKS’ and – in a concession to Serbia’s refusal to recognise its former province as a state – ‘KS’, denoting simply ‘Kosovo’.

The ‘status-neutral’ KS plates were issued first by the UN administration mission in Kosovo, UNMIK. The move was aimed at encouraging Serbs in the north to start using Kosovo-issued plates, but many did not bother and kept on using Serbian plates instead.

In 2016, Kosovo extended the validity of the KS plates for another five years. When this measure expired on September 15, Prime Minister Albin Kurti’s government decided against extending it and announced that it would also require the removal of Serbian-issued plates at the border and their replacement with temporary Kosovo plates.

Serbia, for its part, does not recognise the RKS plates and requires drivers to remove them at the border and pay for temporary Serbian plates.

As the blockade of the border crossings continued this week, the NATO-led peacekeeping mission in Kosovo, KFOR, stepped in to offer a solution, but this was reportedly refused by the mayors of four Serb-majority northern municipalities.

Media in Kosovo reported that a proposal made by KFOR’s commander, General Franco Federici, would have seen protesters unblock the roads and special police units withdraw from the north, with KFOR soldiers taking over the crossing points.

But the mayors of Mitrovica North, Zvecan, Leposavic and Zubin Potok insisted that the Kosovo government should also withdraw the decision on licence plates.

In a joint statement on Tuesday, the four Serb mayors insisted that the decision “endangers freedom of movement”.

“In consultation with our citizens, we unanimously rejected the [KFOR] proposal. Our people and we as their representatives are not ready to agree with Pristina’s intention to put us in a ghetto,” they said.

“Given that KFOR has offered additional engagements and has offered to protect our border police with additional forces at the border crossing points, we have stated that the presence of the special units would be unnecessary upon the removal of the barricades,” Svecla said on Tuesday.

KFOR has shown a visible presence in the area in an attempt to maintain calm. On Tuesday, four Polish KFOR soldiers twice patrolled through the blockades and the Kosovo police checkpoint.

The dispute was on the table on Wednesday morning at a meeting between delegations from Kosovo and Serbia in Brussels as part of the European Union-facilitated dialogue.

“This morning, I had two separate meetings with the chief negotiators of Kosovo and Serbia to discuss ways to solve the current crisis,” EU envoy Miroslav Lajcak wrote on Twitter. “We will continue our discussions throughout the day.”