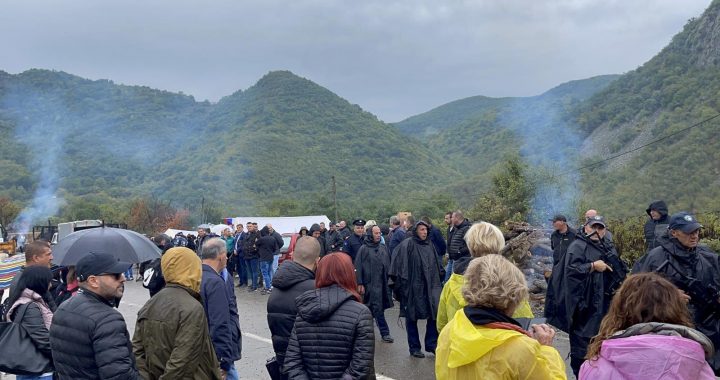 Kosovo’s decision to no longer recognise vehicle licence plates issued in Serbia throws a spotlight on the everyday hardships inflicted on ordinary Serbs and Albanians from the failure of Belgrade and Pristina to resolve their relations.

For Milica Rakic Andric, a civil society activist in the northern Kosovo town of Mitrovica, the clock has been turned back five or six years, “when it was common to see cars without licence plates here.”

Border protests, arson and the sabre-rattling of political leaders represent an even more ominous throwback to the days following Kosovo’s declaration of independence from Serbia in 2008.

The trigger this time? An announcement by Kosovo that it no longer recognises Serbian vehicle licence plates, so-called ‘reciprocity’ for Serbia’s long-standing refusal to recognise licence plates issued by Kosovo.

Licence plates have been a bone of contention ever since the 1998-99 Kosovo war, which ended in 11 weeks of NATO bombing to force out Serbian forces, leaving majority-Albanian Kosovo a ward of the United Nations until 2008.

Serbia withdrew, but continued operating a parallel administrative system for Kosovo Serbs, including thousands in northern Kosovo who have continued to use Serbian-issued licence plates bearing the markings of Kosovo cities.

Serbia does not recognise Kosovo as an independent state and European Union-mediated talks aimed at ‘normalising’ relations between the two have dragged on for years with little real progress on the ground.

The September 20 announcement by Kosovo reflects the tense state of relations between Serbian President Aleksandar Vucic and Kosovo’s new prime minister, Albin Kurti, but it’s ordinary people – Serbs and Albanians – living in Kosovo and in Serbia’s southern Presevo Valley who will be most affected.

“The new measures affect Serbs and Albanians alike,” said Igor Markovic of the Mitrovica-based NGO Aktiv. “The latter, and especially those who travel to Kosovo on a daily basis from the [Serbian] municipalities of Presevo, Medvedja and Bujanovac, are no less affected by the new measures. Their number is certainly neither small nor negligible.”

For Serbs in north Kosovo, “with the introduction of reciprocal measures, vehicles [with Serbian plates] that import goods into Kosovo will be the victims of additional delays, which will ultimately slow down the flow of goods,” he told BIRN.

If the protests go on, basic supplies to north Kosovo will be affected and could create “a humanitarian crisis,” he said.

In 2011, three years after Kosovo declared independence, Kosovo and Serbia reached an agreement by which Kosovo authorities would issue licence plates marked ‘RKS’ and, in a concession to Serbia’s refusal to recognise its former province as a state, ‘KS’, denoting simply ‘Kosovo’. The move was aimed at encouraging Serbs in the north to start using Kosovo-issued plates, but many did not bother.

In 2016, Kosovo extended the validity of KS plates for another five years. When the measure expired on September 15, Kurti’s government decided against extending it and announced as well that it would require the removal of Serbian-issued licence plates for cities in Serbia and their replacement with temporary Kosovo plates.

The decree, the government argues, reflects what Serbia has been doing for the past two decades – requiring drivers with Kosovo-issued plates to take temporary plates on entering Serbia.

Prior to the decree, Markovic said, a couple of thousand Serbs in the north drove cars on Serbian-issued licence plates and “practically functioned within the limits of the grey zone tolerated by everyone.”

Now, the new regulation, which Markovic described as “partially precise”, renders vehicles with such plates “practically illegal in Kosovo due to the fact that under Kosovo law it is almost impossible to replace them with RKS [Republic of Kosovo] plates,” because the Serbian ones are not recognised in Kosovo

Serbia, for its part, does not recognise RKS plates and requires drivers to remove them at the border and pay for temporary Serbian plates.

Markovic complained about the absence of a clear translation of the decree into Serbian and ambiguities in the decree itself, reflecting, he said, “poor treatment [of Kosovo Serbs] and the absence of will on the part of the government in Pristina to adequately communicate with members of the Serb community in Kosovo.”

Angry Serb truck drivers have been blocking the border crossings at Jarinje and Bernjak/Brnjak for more than a week, watched by Kosovo police special units.

“We know that the Kosovo government is just confiscating them, for now, taking them away and you’re left with a car without licence plates,” said Milica Andric Rakic of the Mitrovica-based NGO New Social Initiative.

For Serbs in Kosovo, even if they do manage to register their cars on RKS plates, they then face having to pay for Serbian temporary plates on entering Serbia, again incurring delays and a cost of five euros for two months. Were Serbia to recognise RKS plates, Andric Rakic said there would still be security concerns over driving on RKS plates in Serbia.

But it’s not just Serbs who are affected.

Thousands of ethnic Albanians live in Serbia’s southern Presevo Valley, adjacent to Kosovo, and have strong economic and family ties to Kosovo. They now face having to replace their Serbian licence plates with temporary Kosovo plates on entering Kosovo, incurring delays and an extra cost of five euros for temporary plates that last 60 days.

But some Albanians in the Presevo Valley say it is a small price worth paying in the interests of Kosovo’s consolidation as an independent state.

“In comparison with the long-term effect of consolidating Kosovo statehood, the tax and the need to change licence plates is not an even an issue,” said Burim Xheladini, originally from Bujanovac in southern Serbia but who now lives and works in Pristina as owner of a company called Meritaterm ShPK which often imports from Serbia.

Operating mainly in Kosovo, Xheladini’s business vehicles mainly use RKS plates, but he has Serbian plates on his personal car. The first day of the new decree, he was stopped by Kosovo police. “We had difficulties, but no fines,” he said. “The five minutes it takes to switch licence plates and the tax of five euros are nothing,” Xheladini told BIRN.

Kurti’s government has promised to reimburse the Presevo Albanians, but despite the inconvenience and extra cost, their local political representatives have largely welcomed Kosovo’s decision as potential leverage to extract future concessions from Serbia in terms of Albanian minority rights.

“This process, which strengthens the sovereignty of Kosovo, is in the interest of the citizens of Presevo,” said Presevo mayor Ardita Sinani, though she admitted to BIRN that she only heard about the decree in the media.

“For the first time since the declaration of independence, Kosovo is behaving as a state vis-a-vis Serbia,” said Egzona Hajrullahu, a 24-year-old Presevo human rights activist. “Five euros for 60 days is not a lot… it’s 30 euros a year.”

Gani Krasniqi, a former member of the economic chamber of the Presevo Valley’s Medvedja municipality, said that ethnic Albanians in the region “might suffer at the border due to having to wait a long time for the procedures to be carried out.” But, he argued, Kosovo Albanians have been “discriminated against” for years when entering Serbia.

But while Ilaz Rushiti, an Albanian from the southern Serbian municipality of Medvedja, said he was willing to pay for temporary plates to enter Kosovo, he would prefer to see Kosovo and Serbia reach a deal that would not hurt anyone.

“We citizens are the ones being harmed,” Rushiti told BIRN, “because in the 21st century, instead of having freedom of movement, we are still dealing with licence plates and car queues.”