The need for firewood to heat homes throughout the winter gives those at the margins of Kosovo’s economy a small window to try and earn some extra money, and search for some relief from the hardships of poverty and unemployment.

When fall begins, trucks and tractors loaded with chopped firewood are seen all over Kosovo, bringing the wood used to heat homes across the country during the cold winter months.

For the nearly 25,000 families under Kosovo’s social scheme receiving financial support from the government, having enough wood to survive the winter is a cause for celebration. And for many members of these families, firewood season also provides opportunities for temporary employment.

Mustafe Ahmeti from Prishtina is among those who try to earn some extra money in the fall chopping logs down into smaller sized pieces ready to heat the home. He offers his assistance in spots around the city where people can purchase firewood. Axe in hand, he is striving to ensure the survival of his family and seeking money for the purchase of medicine. 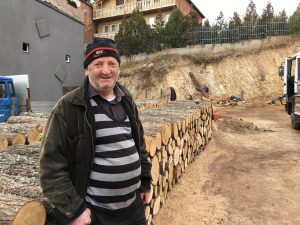 According to Ahmeti, his health has prevented him from finding full time employment, while a lack of speech therapy makes conversation difficult. “In two days time, I won’t have any medicine left,” he says. “If I can’t find a job in the next two days, I’ll have to go out and beg somewhere. I have terrible living conditions. I have two unemployed children. One of them is now 18, the other is 20 years old.”

Ahmeti tells Prishtina Insight that he can earn around three euros for every cubic meter of firewood he chops, but the highest sum of money he has earned in a day is 2.5 euros, and there are many days when he did not earn even a single penny.

“Sometimes we stay here all day, and when there is no work to do, it becomes meaningless,” he says with a smile, but his eyes are slowly welling up. “We were not even able to earn money for our own meal.”

Earlier this year, Ahmeti was removed from the state’s social scheme, though he does not know why. “I was denied the right to receive social assistance,” he says. “I used to receive 65 euros in assistance monthly, but it completely stopped shortly after the new year. Now I have to work [chopping wood] from time to time so I can buy medicine.”

According to data provided by the Municipality of Prishtina for Prishtina Insight, Ahmeti’s family was among 1,800 families under the social scheme.

Ahmeti explains that the amount of people looking for work chopping wood varies a lot, but he is far from alone. “On weekends, many people are here, almost all the time,” he says.

In Prishtina, the ‘Termokos’ central heating company provides heating for some neighborhoods, though many houses in the city and surrounding villages still rely on wood and coal for heat through the winter. Outside of the capital, this reliance is almost total, and wood is the major source of heating all through the winter. In Prizren, 22-year-old Jetmir Bajselmani did not welcome the November rain, as the bad weather made it more difficult for him to earn money. Unlike most of his peers, who start the week attending lectures at university, Bajselmani picks up his axe and goes out in search of people who will pay him to chop their firewood for the approaching winter.

Bajselmani has been chopping wood using both an axe and a mechanical saw for three years, trying to earn money to support his extended family, including his wife and young daughter. “It is a very hard job, very tiring, but it is a job that helps me take care of my family,” he tells Prishtina Insight.

The lack of stability that the work has can cause problems. “Our workload starts in August and continues for a couple of months,” Bajselmani says. “We try to work hard, but we are not employed in state institutions, so we only work occasionally. It can be a struggle to get to the end of the month, because there are times when we are unable to earn even 10 euros.”

The returns are low. In Prizren the average price for chopping wood is 2.5 euros per cubic meter and according Bajselmani work is irregular and tough. “It’s the same routine every day, starting at six in the morning and working until late at night. Of course, that is only when there is work,” he says.

According to data from the Ministry of Labor and Social Welfare obtained by Prishtina Insight, Bajselmani is among 6,983 people from Prizren who are seeking employment in Kosovo’s second largest city.

While Bajselmani is hoping to find a new way to support his family soon, Rami Braha has been working with wood for nearly half a century. The 62-year-old recounts how he started chopping and sawing wood from the age of 12 and never stopped. 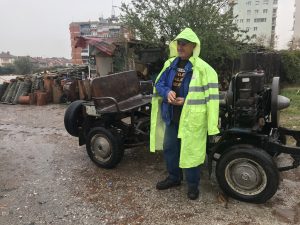 Rami Braha has been sawing wood in Prizren for nearly half a century. Photo: Arta Sopi.

“I’ve been doing this for 50 years,” Braha tells Prishtina Insight. “When I was 12, I began working with my brother-in-law. In 1970 we built a sawmill and ever since then I have worked at the same sawmill. I have never quit this profession, have taken care of my family and raised two sons and a daughter.”

Despite his age, Braha does not complain about the work he does, as he says “one gets tired while staying home.”

However, he believes the profession is becoming more precarious due to the reduced use of firewood. “Nowadays, central heating works with pellets and not with wood, which means less work for us,” he says.

Even for the experienced Braha, the days are long, the work is seasonal, and the profits are slim. “I start work around 07:00 and finish in the evening, often we work after dark,” he says. “The working season mostly includes August, September and October, but there is not enough work because there is a lot of competition. I get paid in cubic meters because I have my own saw and I get paid as much as I saw: if it is 10 cubic meters, I get paid 20 euros.”

Despite the low returns, working at the sawmill is Braha’s only source of income. Even with his two sons having left the country in order to support themselves and the family, Braha still struggles to make ends meet.

“I take care of my family by doing this work,” he says. “I’ve got two sons that have gone abroad and my daughter is married, it’s just me and my wife, but the money earned here is not enough because one has to pay for electricity bills, taxes, water bill, waste.”

But Braha says that the tough conditions have fostered solidarity among people in Prizren, and that he often prepares wood for poorer families free of charge. “When there is somebody without money, I saw one or two cubic meters of firewood just for the sake of my soul,” he tells Prishtina Insight.

Similar acts of kindness come from his clients, with Braha grateful for the tips and care he has received from people. “People give tips, one euro, two euros: sometimes they buy us something to eat or drink, or even serve us coffee, some give less, some more,” he says, smiling. 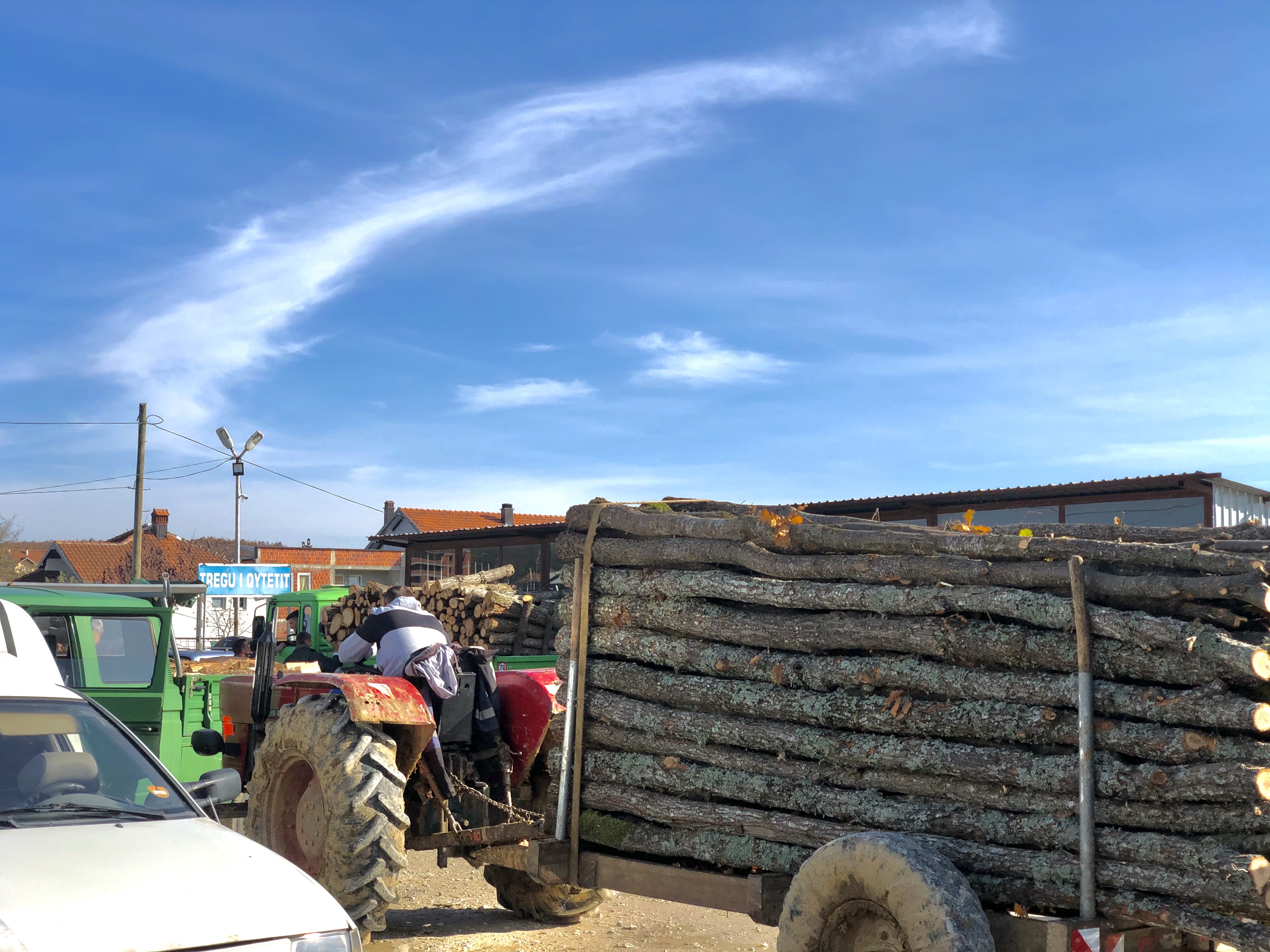 According to the Municipality of Prizren, there are 804 families in the municipality who receive assistance from the social scheme. The number is similar in Skenderaj in central Kosovo, a municipality almost a quarter of the size of Prizren.

Albert* is from Skenderaj and has spent 15 years selling wood he cuts down from nearby forests, telling Prishtina Insight that he has never had any other job in his life. The 34-year-old says that despite being a tedious and physically straining job, he can earn good money depending on the season.

“In most cases, we go to the same families, who are our customers,” he tells Prishtina Insight. “Of course we make money, but it also depends on the weather. During the summer season the wood is cheaper to sell, cheaper to chop and even cheaper to saw. Chopping a meter of wood costs three euros. I manage to earn 20 to 25 euros, but there are times when some clients give more,” he says.

Albert* is the only person working among his family of eight. He only works during the wood chopping season, and taking care of his family from this income alone is not an easy task. 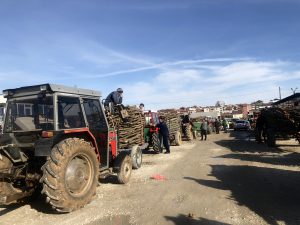 Tractors filled with wood in a market in Skenderaj. Photo: Xheneta Murtezaj.

According to data from the Employment Agency of Kosovo, there are more than 8,000 people who are jobless in the municipality, which has around 50,000 inhabitants.

“Besides this, I don’t do anything else,” he says. “I only deal with wood. I have to take care of my family by doing this hard job.”

*The name of Albert has been changed.