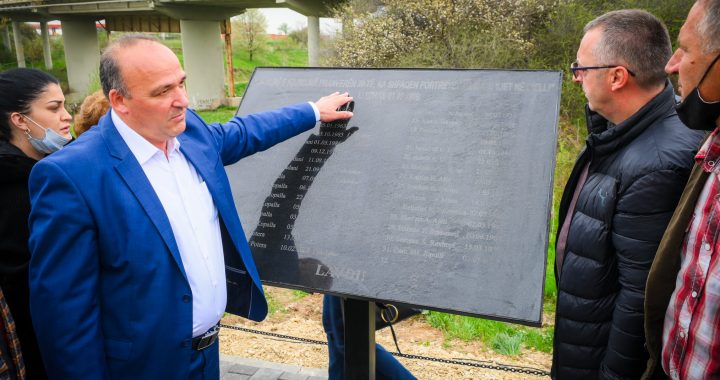 Humanitarian Law Centre Kosovo has said that a memorial to bus passengers killed in a 1999 NATO air strike unveiled by the Municipality of Podujevo on Saturday excludes the names of 13 Serbian victims.

Humanitarian Law Centre Kosovo, HLC, has issued a press release requesting that the Municipality of Podujevo correct a memorial dedicated to the tragedy at Lluzhan bridge on May 1, 1999, when a NATO air strike hit a bus, killing many onboard.

HLC’s statement, which is supported by an informal coalition of NGOs and experts focusing on dealing with the past, says that a plaque commemorating the tragedy excludes the names of 13 Serbian victims.

The memorial was unveiled by the Mayor of Podujevo, Vetevendosje’s Shpejtim Bulliqi, on Saturday, the 22nd anniversary of the tragedy.

“In cooperation with the families of the victims, we have initiated the construction of this memorial plaque with the names of the victims who suffered, so that in each anniversary we have a place to honour them,” Bulliqi said.

In a statement, the Municipality of Podujevo stated that the plaque contained the names of “the 31 citizens who fell.” However, HLC stated on Wednesday that, according to its data, 44 people lost their lives in the tragedy – 31 Albanian civilians and 13 Serbs, of whom seven were civilians.

The transitional justice NGO called on all commemorative initiatives honouring victims to include all victims, regardless of their gender, race or ethnicity, adding that “the denial of victims on ethnic grounds is an insult to victims and their families and only deepens the divisions between communities in Kosovo.”

The organisation further expressed its “deep concern with the way the victims are commemorated, particularly when local and state institutions contribute to the reinforcement of one-sided narratives, that put forward selective versions of history.”

Speaking to Prishtina Insight, Mayor Shpejtim Bulliqi defended the memorial, pointing to a 32nd entry on the plaque. “At the end of the plaque there are three dots, which means there are others,” he said.

Bulliqi told Prishtina Insight that the Municipality was relying on information from a municipal commission, which did not have confirmed information about other victims of the tragedy. The mayor did not confirm whether the memorial would be updated if names were provided.

Responding to Bulliqi’s statement, Bekim Blakaj, the Executive Director of HLC, told Prishtina Insight that the inclusion of three dots on the plaque was “not dignifying to the victims.”

“Putting three dots means that the Municipality knew there were other victims and more research should have been conducted,” Blakaj said. “It is unacceptable. Among the victims were Serb children, as there were Albanian children.”

“You can imagine how the family of the victims feel,” he added.