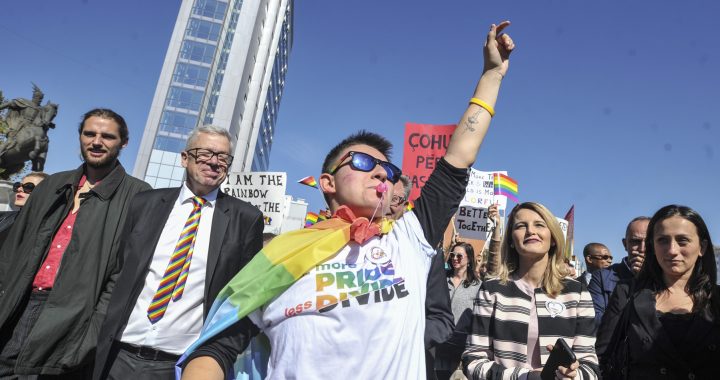 Kosovo Police said on Tuesday that they are looking into allegations that the life of a well-known LGBT activist, Lend Mustafa, was threatened at the weekend.

“We are currently working on an investigation of circumstances of the incident and in coordination with the prosecutor have initiated an investigation into the intimidation,” police told BIRN in a written answer.

On Sunday, Mustafa said in a post on Facebook that he was threatened in Prishtina’s main square.

“It is noon in the square and a bearded boy spat in my face and shouted ‘I will kill you’,” Mustafa wrote.

“I have been insulted before, I was threatened and someone tried to run over me with a car [in the street] but nothing has been more humiliating and disgusting so far,” he added.

Mustafa vowed not to give up his activism.

“I will still fight as I have always fought and I will remain here [in Kosovo],” he said.

The Centre for Equality and Liberty, a local organisation which advocates for the rights of the LGBT community in Kosovo, condemned the threat and urged the police to bring the perpetrator to justice.

“The motive of this threat is believed to be gender identity and sexual orientation, which is punishable according to Kosovo’s laws,” the Centre for Equality and Liberty said.

“We stand behind Lend [Mustafa] and anyone who is a victim of discrimination based on gender identity and sexual orientation,” it added.

A number of peaceful Pride parades have been held in Kosovo in recent years with the participation of main political leaders, suggesting that progress is being made on LGBT rights in the country.

In January 2020, a Prishtina court gave Blert Morina, a transgender man from Kosovo, the right to officially change his first name in his ID documents from female to male after years of his struggle with justice system.

But discrimination remains and social media users often use hate speech against the LGBT community.