This culinary guide to Prizren will please your Dokufest palate

Our guide to Prizren’s best food, drink, and sweets will help you to enjoy the delicious side of Dokufest.

Our guide to Prizren’s best food, drink, and sweets will help you to enjoy the delicious side of  Dokufest.

Since 2001, many visitors first came to Prizren for its Dokufest International Documentary and Short Film Festival. I originally visited to explore the gorgeous old architecture, but I’ve returned again and again for the Turkish food, pistachio baklava, and laid back café lifestyle.

With some feedback from Prizren locals and aficionados, Prishtina Insight has put together your culinary guide to Prizren. Of course, from August 5-13, we are all here for the films, workshops, and performances, but we also all must eat. So eat well!

Location: If you’re walking from the center, follow Adem Jashari Street through the Bazhderhane neighborhood for about ten minutes.

It would be such a shame to take a trip to Prizren without having at least one Turkish meal. The menu at Akdeniz is so expansive and so good that you might find yourself going back again and again. 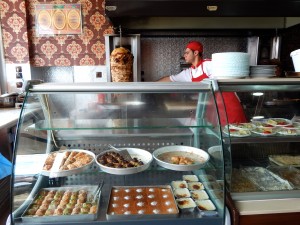 The menu is only in Albanian, but feel free to ask the waiter for the picture book. Each menu item costs between one and three euros. My favorites include the mezze platters, the chicken doner plate, and the red lentil corbasi soup. The hummus is impeccably smooth (though I wish it were served warm) and the baba ganoush is super fresh. I would also suggest you order one of the pide, a take on the popular Turkish street food composed of delicious homemade dough, minced meat, and lots of spices. Wash it all down with a glass of salty Turkish yogurt (ajran), Turkish raki (a floral and distinctive anise aperitif), or a local Balkan beer. 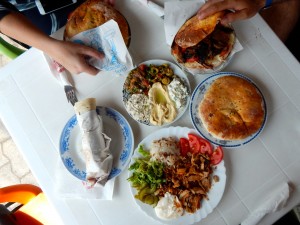 If you’ve been before, note that they moved locations a few months ago. The new spot is about a ten-minute walk from the city center, but I think you’ll find that the walk is well worth it—the street is lined with dress shops and jewelry stores that display Kosovo wedding styles and delicate filigree handiworks.

Location: Just across from the Theranda hotel

Choosing your favorite byrektore is a controversial task. But I think that Aurora bakery has one of the best cheese bureks in Kosovo! And don’t forget to order a little cup of plain, drinkable yogurt. 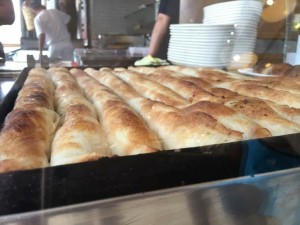 Aurora has a large dining area and its long working hours make this the perfect spot for an early breakfast or a late night snack. I swear, every time I eat a burek after having several beers, I’m hangover free the next morning.

Location: Right across from the main Dokufest tent and the Prizren fountain

The Sarajevo bakery is another burek favorite, especially because here you’ll find something out of the norm. 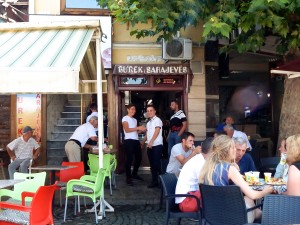 Sarajevo is tiny inside but has plenty of room out front. Photo: Faith Bailey

In most Kosovo bakeries, you chose from the three classics: burek with spinach, burek with cheese, and burek with meat. But Sarajevo has a delicious cabbage one!

Location: Left of the Church of the Holy Virgin of Levisa

I’ve noticed that Vintage is a favorite spot for young couples to snuggle in during the winter months. And how could it not be—the cute, shabby décor, dim lightening, and romantic patio make it a great place to chat and rejuvenate. 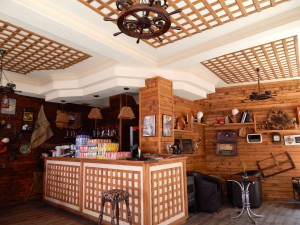 Location: Alongside the river, just down from the Sinanpasha mosque

Ambient is a lovely place with a view that is great for breakfast, lunch, or dinner. Choose from a list of vegetarian dishes, meats, pastas, and desserts. 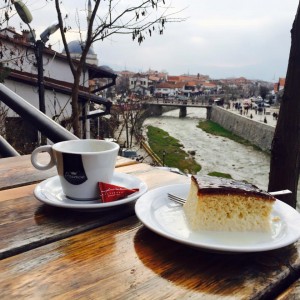 My favorite cake is called trileqe. It’s a milky, soft vanilla and caramel cake that you may know as the popular South American cake tres leches.

Location: Sejdi Begu (in the center along the river), near the Prizren fountain

Prince Coffee, a small Kosovo chain owned by the Peja-based Devolli Corporation, recently extended its Kosovo superstar status to its first USA coffee shop in the Bronx. But I’d honestly bet that no Prince Coffee House is as well established as Prizren’s. This place is basically a Prizren institution. Expect it to be crowded, but the iced coffee and clean bathrooms make it worth a visit. 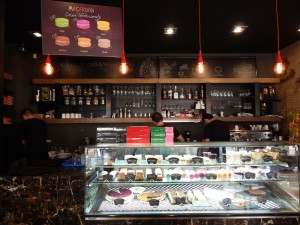 A word for the wise, though, I recently ordered a chocolate shake that turned out to be watery chocolate milk. But I like the ornate Turkish coffee platter and the iced Americano (iced Americanos are not on the menu, but feel free to ask for one anyway). 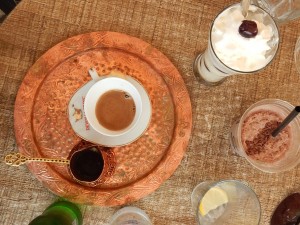 They will be running two specials during Dokufest. Caffeine happy hour will be from 7 to 10 p.m.—bottled juice, macchiato, Turkish coffee, and espresso will be half off (making each just 50 cents). And for 1.50 euros, choose from a list of ‘shakes’ (such as a fruit and cream shake and a lemonade style drink) and you’ll also get a Balkan style raffaello, a little vanilla bon bon.

Location: Follow the same directions listed above for Akdeniz.

If you’re up for dessert after a meal at Akdeniz, you can hop right over to Missini Sweets. This small Kosovo chain started in Mitrovica, expanded to Prishtina, and just recently opened its first shop in Prizren. Although there are several classic baklava spots in the city, my local friends are super excited about this well-regarded confectionary. 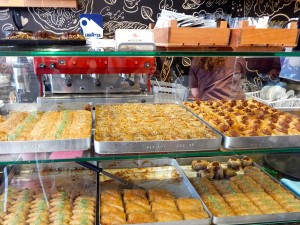 They boast plenty of Turkish and Balkan treats to try. My favorites include the Profiteral Krem Qokolade, a rich and dense (but not too sweet!) chocolate pudding served in a glass, and the pistachio walnut baklava served with vanilla ice cream. 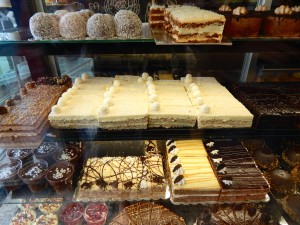 Since they open early, you can take a morning walk to get an omelette (only 1.50 euros) or a salty (Balkan style) plate of French toast and cheese. They also offer a lunch menu focused on salads and pizzas.

Location: Vatra Shqiptare Street. From the Lumi stage, follow the sidewalk until you turn the corner at the Maksut Pasha mosque.

Marashi is fairly central, but tucked away in a quiet garden that sits behind a beautiful little mosque. The outdoor seating is lovely and locals claim that the meat is some of the best around. 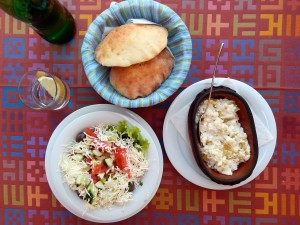 There are also great pastas ranging from three to five euros (with specifically vegetarian options), fish platters, and salads. The wine list includes a few local bottles and some Australian or Italian options.

Location: 56 Sheshi i Shatërvanit (in the center along the river), near the Sinan Pasha mosque

Beska is one of Prizren’s most well known restaurants. It’s the kind of place frequented by visitors and locals alike, but it’s so popular that some people from Prizren find it to be passé. There is plenty on the menu to choose from, but I suggest you go for grilled foods: platters with meats and veggies range from seven to eight euros, and the a la carte menu offers plates ranging from 1.50 to seven euros. 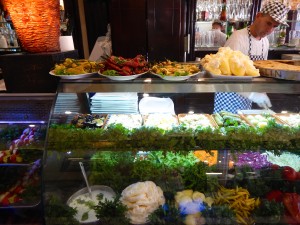 Beska also has ice cream, pastries, and baklava described by locals as one of the best in Prizren. Usually you can also order a Turkish tea to accompany your evening dessert. Don’t be surprised to find ducklings waddling around the semi-enclosed garden.

Location: On Sejdi Begu Street (along the river downtown), just a couple buildings down from Prince Coffee House

This well-known and highly regarded spot offers a glass case showcasing the day’s fresh sausages and meat patties. Grilled meats are served with vegetables and traditional breads and are typically washed down with yogurt or ajran. 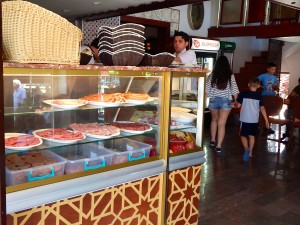 Qebapa is kind of like fast food, but delicious and fresh—especially at Syla.

Location: Right next to Complex Europa

These two bars sit side by side and offer some of the best mixed drinks in Prizren. Order a margarita at BarAca and then head over to Qarshia for a gin and tonic. 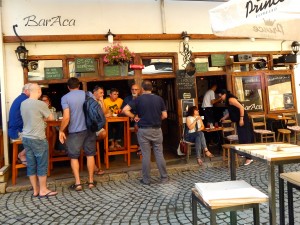 BarAca is a local favorite for drink any time of day. Photo: Faith Bailey.

They’re centrally located between the film stages and the outdoor seating will feel great in the evening air.

Location: Along the river in the center, tucked into the row of Dokufest popup tents

My favorite Prishtina-based bakery has a pop-up shop in Prizren for Dokufest. My favorite Prishtina morning ritual lately has been to head over to Trosha for a yogurt and a xhevrek, a round and seedy Turkish-style bread. I’m very excited to continue this ritual at Dokufest as well. 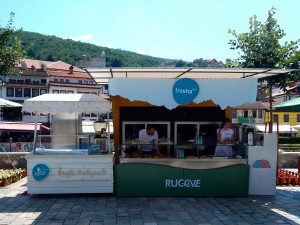 Also, their ice cream is some of the best that I’ve had in Kosovo, so definitely stop by to cool off in between films.