A once small festival celebrates its 15th anniversary, marking its transition into a world class act.

Kosovo is the only Balkan country without visa liberalization, but despite its isolation, for nine days in August, its second biggest city, Prizren, feels like it is the center of the world.

Every year the cobblestoned streets of the city, once an Ottoman trade center, bear the weight of guests from all over the world. These visitors are not just tourists – they are film lovers massing to attend the international documentary and short film festival DokuFest.

For the festival’s duration, the entire city becomes a cinema complex. The organizers set up open-air screenings on top of the Lumbardhi river, inside the city’s ancient hilltop fortress and wherever else possible, presenting films with the mantra “a wall is a screen.”

International documentaries and the guests from all over serve as a window to the world for Kosovo’s young, while for those who visit during this enchanting time , the festival is the best showcase of the young state’s development.

Not long ago, Prizren had no cinema whatsoever. Today it boasts two permanent movie theaters year-round. DokuFest’s legacy had much to do with it. 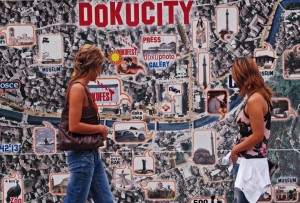 Today, the festival has become emblematic of the perseverance of the Kosovars: it is a product of common people voluntarily taking action and realizing a vision.

In 2002, a handful of Prizrenalis came together as a movement to functionalize Lumbardhi, an open air cinema opened originally in 1952, but which as a result of the war, had been closed since 1999.

“It was unacceptable that the second biggest open air cinema in Yugoslavia after the one in Pula [Croatia] was closed,” says the festival’s co-founder Eroll Shporta. Lumbardhi can seat 485 people in its cool garden today, but in the past it could up to 700.

“I remember it was a rule [before the war] to go to cinema Lumbardhi.  Only four tickets needed to be sold in order for the management of the cinema to play the movie. When we were only three of us we sometimes bought the fourth ticket,” recalls Shporta.

“It was our naive idea that in case we start putting [the cinema] to work with any of our activities it would start work regularly,” says Veton Nurkollari, DokuFest’s Program Director.

They faced difficulties in protecting the cinema while municipal and central government authorities tried to change the cinema’s designation and privatize it. “We had to literally defend it,” says Nurkollari.

Without experience and with a symbolic amount of money, DokuFest’s first edition was held. It was a struggle. “To organize a film festival and to love movies are definitely two different things,” emphasized Shporta.

“At the time, none of us had ever been to a documentary film festival. We didn’t have experience, nor did we have the money, but we put ourselves totally in it,” said Nurkollari.

The organizers also made a particular choice: they decided to focus on documentary films.“We wanted to bring a new kind of films that at the time were not popular in Kosovo,” explained Shporta. It helped, especially in branding. Unlike its regional sibling, Sarajevo Film Festival, which attracts more than 100,000 visitors, DokuFest’s is not a glitzy red carpet event, and this was clear from day one.

The organizers maintained their activist focus, continuing to lobby for the cinema and the protection of cultural heritage sites, abundant in the city, which also houses a UNESCO world heritage site. 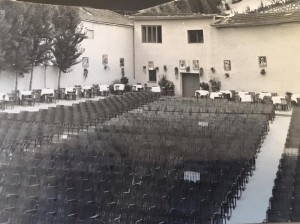 Cinema Lumbardhi in the 50s. Courtesy of Kino Lumbardhi.

The movement for the cinema’s preservation culminated in the initiative for the Protection of Lumbardhi, a coalition of over 50 organizations that actively lobbied against the destruction of  what had become DokuFest’s emblematic home. Finally, in September 2015, more than 10 years after the original festival had been organized, activists managed to pressure the municipality into declaring the building “an area of general public interest.”

Lumbardhi’s survival is DokuFest’s crowning achievement and when its doors open this year, both organizers and attendees will breathe easier knowing for certain it is not the last time they see the quaint place.

It’s about the movies…and more

DokuFest’s actual offices are next to a mosque, in the new cinema building – freshly built in 2013. Coolness reigns in the office, compared to the heat of the streets of Prizren, but everyone is abuzz.

The first DokuFest was a small event with a total budget of around 5,000 euros. At the time it ran for three days and only 20 documentaries were screened at the Lumbardhi cinema.

Since then, DokuFest has come a long way: it operates as an organization with a full-time staff of 18, reinforced by 60 coordinators and 140 volunteers during the festival. 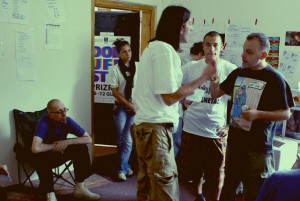 At the offices of DokuFest, stressing. 2006. Photo: courtesy of DokuFest.

This year, the festival will run for nine days with a program which will include 200 films, screenings in five different cinemas, photography exhibitions, panels with filmmakers and activists, followed by workshops with filmmakers and tech experts, topped with late night concerts and parties.

During the festival one can perceive DokuFest’s positive influence by simply walking down the Prizren streets, bubbling with people speaking diverse languages of the world.

According to some estimates, local businesses gain about 4.2 million euros because of DokuFest, claims Nita Deda, the current festival director.  A report by GAP Institute claims that “the annual impact  [of DokuFest] is estimated to be over 4.7 million Euros.”

While, the organizers had immediately recognized the festival’s potential, they also knew that quality was crucial in building it up.

Nurkollari, a committee member of Cinema Eye Honors in New York City, explained that “a qualitative program of documentaries is absolutely needed in order to have a successful festival.” 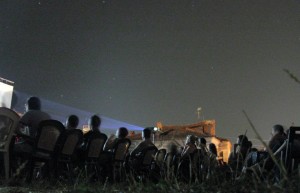 Last year, DokuFest screened Citizen Four, Laura Poitras’ film on Edward Snowden, which won an Academy Award in 2015. In 2011, the festival hosted PJ Harvey and the Irish photographer Seamus Murphy, who presented 12 films made for Harvey’s “Let England Shake” album. Murphy is returning this year again with a photography exhibition. In 2013 Signe Byrge Sorenson, the producer of the award-winning documentary The Act of Killing held a masterclass.

Additionally, the festival provides a platform for regional and Kosovo films, giving out a prize for documentaries produced in the region and a prize for films produced in Kosovo specifically. By 2020, the organizers also expect to open the Documentary Institute for Balkans in Prizren.

“From an outsider’s point of view the festival looked like a thing that had the energy and idea of ‘We are building up the country,” said Deda. After studying in Prague, she joined the team in 2010 as the head of the press department. “It was the only positive thing about my country.”

For the jubilee edition, festival organizers chose “Corruption” as a theme – and it is not by happenstance. According to a 2016 Freedom House report, corruption in Kosovo is rampant. Prizren’s own mayor, Ramadan Muja, was found guilty of “misuse of the office” and sentenced to two years probation. He has appealed the ruling, but continues to serve as the city’s mayor despite local discontent. 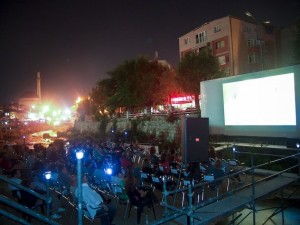 A cinema over the Lumbardhi river, running through Prizren. Photo: courtesy of DokuFest.

On June 6 of this year, a little girl lost her life in a tragic incident: Xheneta Gashi, a three-year-old girl was found in the rubble of an old house in the historic zone which had collapsed after years of neglect. As a response to the institutional silence, more than twenty organisations organized a protest in Prizren.

The city administration has done little to preserve old buildings in what is considered Kosovo’s crown jewel in cultural heritage, while well-connected businessmen violate construction limitations and appropriate public space in the city’s historic center.

The small group of protesters, amongst which one could easily spot DokuFest’s organizers, requested the resignations of the mayor, the minister for culture and minister for spatial planning. Neither obliged.

Perhaps, it is exactly this ‘activist nature’ of DokuFest and its organizers that has made them indispensable to the local community, proud of Prizren’s role as a city of culture. However, it has also created a precarious relationship with local politicians, said Eroll Bilibani, the organization’s  director.

“We are an activist movement that aims to make changes in the society using documentary films,” says Bilibani. “And that’s why we don’t have stable funding.”

This year, the festival has a budget of 300 thousands euros, but the organizers still struggle. Politician are fond of appearing in DokuFest and supporting it, morally, explained Deda.

“It is shameful that after 15 successful years of organizing the festival, we still struggle to fund raise, we still have to convince the Ministry of Culture that we can do this.” 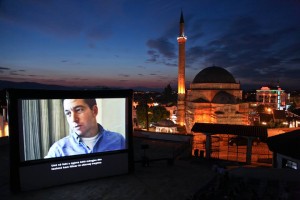 Screening during the 2014 “Change” edition. Photo: courtesy of DokuFest.

“This year’s edition is special because it is the 15th anniversary and the biggest edition ever,” said Deda.

The organizers also expect more visitors than ever. 20,000 people are expected to attend DokuFest events, but for the duration of the festival more than 60,000 people visit the city itself.

Shops, restaurants and hotels, have prepared for the masses that close in on the small old town during the hot summer days. Even common people open their houses to guests who cannot find accommodation in one of the cute hotels and hostels dotting the historic center.

Edi, a 24-year-old who lives in Prizren is unsparing in praise when describing the festival. “It’s more than a story of success. I would call it a festival of love!”

In terms of program, the controversial Houston, we have a problem from Žiga Virc, a Slovenian director, will be screened. The docu-fiction experiments with conspiracy theories that NASA bought Yugoslavia’s space program, eventually leading to the federation’s collapse. Full of real footage, it confused and entertained audiences in Tribeca.

“It is a documentary that was heavily debated,” explained Bilibani, one of the organizers. “It is a lie, a conspiracy theory about the fall of Yugoslavia. Its purpose is to show how documentary movies can be used for propaganda as well.”

Following the main theme, Behemoth, a documentary on corrupt construction schemes in China’s emerging ‘ghost towns,’ will also be screened. “ [The film]  treats corruption in China from a philosophical perspective,” said Bilibani.

Bilibani also mischievously revealed that they will open a Museum of Corruption but refused to reveal details. “This will be a surprise,” he added smiling.

by Enver Robelli
Next: News