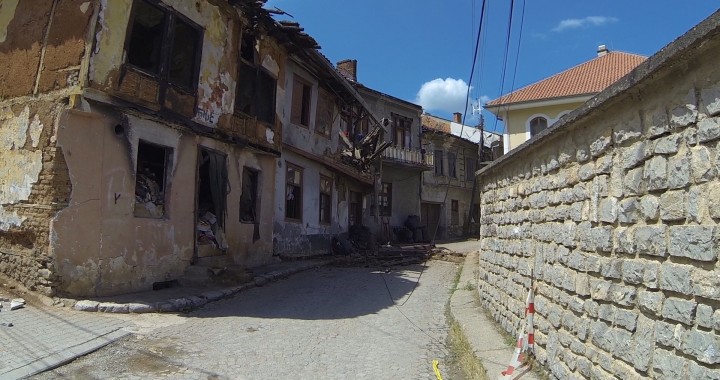 Civil society organisations will protest on Wednesday in Prizren, accusing the local and central government of neglect after a three-year-old child died due to the collapse of an old building.

Residents of Prizren woke up on June 6 to news of a tragic incident:  Xheneta Gashi, a three year old girl, was found in the rubble of an old house in the historic zone, which had collapsed  after years of neglect. While institutions have hesitated to react,  a municipal officer called the victim’s family “usurpers,” shifting the blame to the family.

Xheneta was living with mother and twin brother next door to one of the many old and decrepit houses in Prizren’s historical center. Her mother Lirije has pled for someone to be held accountable for her young child’s death.

As a response to institutional silence, more than twenty organisations are organizing a protest in central Prizren on Wednesday, June 15. They are demanding the resignation of Prizren’s mayor Ramadan Muja, who is appealing a sentence for abuse of office; the resignation of the Minister of Culture Kujtim Shala  and the Minister of environment Ferid Agani, as well as the prioritization of the investigation on young Xheneta’s death.

EC Ma Ndryshe, an NGO from Prizren who has been lobbying for the preservation of the historic center, considers the recent death as ‘a murder through inaction.’

“We consider this murder,” says Hajrulla Çeku, the organisation’s director. “Also, Article 8  of the Criminal Code of Kosovo defines death arising from inaction as a criminal offense. It is clearly a case of institutional negligence,” says Çeku, clearly fuming at the tragedy.

“If they could not manage to go through with the bid for intervention to the buildings for two years in a row, they could at least have stopped the free movement of people on Marin Barleti street,” adds Ceku.

Kosovo’s Ministry of Culture, on the other hand, considers the delayed intervention in the decrepit old houses a result of limitations posed by the Law on Public Procurement.

“We have asked the Office of Procurement and the General Secretary [of the Ministry of Culture] to analyze and see the possibilities to consult with Regulatory Commission of Public Procurement in order to find a solution within the frame of the existing laws in Kosovo, ” says Vjollca Aliu, form the Department of Cultural Heritage within Ministry of Culture.

Aliu contends that the Ministry has made many attempts to commission interventions in the buildings  but each bid fell through because not enough companies applied to get the contracts for the renovations. Kosovo’s Law on Public Procurement requires three bidders for each tender.

Ceku says there is no excuse.

“If they attempted for two years that does not mean they have fulfilled their duty,” he insists. “The job has not been done.”

Decrepit buildings collapse or are demolished in the old town of Prizren, while institutions continue squabbling and denying responsibility of their preservation.

Moreover, an intricate chain of bureaucracy makes it impossible to intervene fast in emergencies, and in some cases even years.

According to the Ministry of Culture, the last list of the proposed monuments has 1,525 assets which are under temporary protection broken into five categories such as archeological monuments, architectonic monuments, movable monuments, spiritual and natural monuments.

Sali Shoshi, executive director of the NGO Cultural Heritage without Borders, says that Kosovo institutions have no clear plan for registering and preserving cultural monuments.

“State institutions are not responding proportionally to the situation. Restorations and other interventions are being done without any previous evaluation, they are being done on ad-hoc basis,” explains Shoshi.

In the question directed on this issue Ministry of Culture avoided a direct reply.

“The Ministry of Culture already sent a proposal of 100 monuments to the Council for Cultural Heritage to give them the status of permanent protected monuments,” says Aliu.

However, monuments of cultural heritage of Kosovo are under permanent threat since there are no emergent interventions.

“In Prishtina in example, from 2002-2007, 44% of the buildings that are considered protected monuments collapsed for different reasons. Out of a total of 101 buildings, 45 have collapsed and I think this is continuing in other cities as well,” says Shoshi, with a worried expression.

The demolition of these monuments occurs due to natural and social causes, explains Ceku. He does not think that protection is a matter of citizens’ insensitivity.

“In most cases there was no institutional help to maintain the old houses,” explains Ceku. “Old houses need a lot of maintenance in order for them to be in a good shape.”

Shoshi from CHwB confirms that in Kosovo relevant institutions do not facilitate the private owners of these monuments.

“There must be different subventions and other fiscal facilitations, but in Kosovo none of this happens,” says Shoshi.

Ceku says that the topics that will be addressed Wednesday’s protest are not specific to the city of Prizren, one of the oldest towns in Kosovo, which is why he said people from all over the country will be joining the protest.

Ceku vows that the civic resistance will continue beyond Wednesday’s event.

“Our series of actions could take place in Prishtina as well if negligence continues,” he says, explaining the chain of command when it comes to filing a request for intervention, starting from the municipality all the way to the regional center of cultural heritage within the Ministry of Culture. Nevertheless, the final authority to approve any interventions remains the municipality.

As such the municipality of Prizren, which should be in charge of all renovations and interventions in the historical zone, remains the main culprit.

“In the case of this tragedy we are talking about two things: public security and protection of the monuments of cultural heritage,” says Ceku. “There is no ambivalence within the law on that matter whatsoever. The municipality should have take measures and they did not, so they are responsible.”