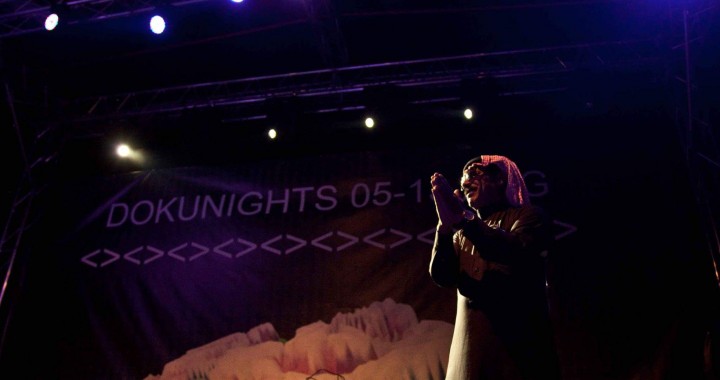 Electronic drums and fast-paced synthesizer sounds by dance musician Omar Souleyman marked the start of this year’s DokuNights, DokuFest’s music festival that will fill the air of the historic city with heartwarming reverberations each night.

The Marashi park along the city’s Bistrica river was filled to the brim with people who were beaming with anticipation for the opening act of the music festival. About one hour and a half after midnight, Souleyman and his accompanying synth player unhurriedly approached the stage after a lively session of cheers and applause.

Prior to being introduced to the western world by U.S. label Sublime Frequencies, Souleyman was prolific in his home country as a wedding musician. During his initial career in Syria starting from 1994, he released over 500 music cassettes of his gigs. The multicultural border region of Al-Hasakah has shaped his music to encompass a wide range of traditional Syrian, Turkish, and Kurdish music.

Ever since his first album debuted in 2006, he has performed at world-renowned festivals such as Bonaroo and Glastonbury, has collaborated with musicians like Bjork, and has had his music sampled by numerous DJs around the world.

As cigarettes were haphazardly lit across the Andrra sport court, Souleyman’s signature glasses, keffiyeh, and thawb slowly became illuminated by flickering lights fixed atop the stage. After a very brief welcome, the sounds of the synthesizer suddenly gained bass and caused the festival-goers to make use of their dancing shoes.

Considering traditional Albanian music is fairly influenced by Middle-Eastern tunes, the locals knew exactly what they had signed up for. Although it seemed like an unlikely place for electronic wedding music, most of the people quickly shrugged it off and embraced the beauty of the vibrations.

Souleyman’s raspy voice, uttering messages of strong love and affection, was accepted with open arms even though most probably did not understand his Arabic lyrics. A portion of “Warni Warni,” one of his most famous songs, roughly translates to: I cannot live without you . . . You’re for me like the water and the air that I breathe that I cannot survive without . . . May God punish who tries to separate you and me.

Even though several people were soon disillusioned by the generally negative sentiment towards Souleyman’s genre of music in Kosovo youth culture, a fair number of people joined in valle, a traditional festive dance, towards the end of the concert.

About two hours after Souleyman initially took the stage, as the remaining listeners were chugging lagers and wobbling their limbs like whips, Souleyman thanked the crowd and left just as leisurely as he came.
Dokunight concerts will take place every night until the August 12 at two separate stages in the city: At the Sunset Stage in the fortress starting from 18:00 and at the Andrra Stage in the Marashi park starting from 00:00. To see the whole schedule, visit DokuFest’s official website. On August 6, Blind Observatory and Leo Lumezi will perform at Andrra Stage.