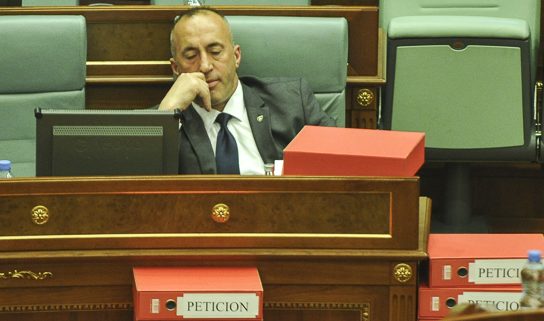 Demarcation to be put to a vote following hours-long debate

Following extensive discussion at the Kosovo Assembly on Tuesday night, MPs decided to table the vote on the demarcation deal with Montenegro for Wednesday morning.

Starting with 85 MPs and closing with 69, the approximately nine hours long extraordinary session at the Kosovo Assembly on the border demarcation agreement with Montenegro ended inconclusively. A tired Kadri Veseli proposed to postpone the vote for the next morning, with the room agreeing to put the bill to a vote on Wednesday at 11 a.m.

Besides repeating well-known party and individual positions on the issue, MPs discussed late into the night, at times even striking harsh notes.

Hajdar Beqa, an MP of the Democratic Party of Kosovo, PDK, compared Vetevendosje with Srpska Lista, which did not attend the session, due to their rejection of the deal.

Vetevendosje MP Glauk Konjufca responded by saying that Hashim Thaci and PDK formed Srpska Lista itself through the 2013 Brussels agreement.

“You created Srpska Lista, Mr. Beqa, it was created through the Brussels talks. You have Lista Srpska in the government and you accuse Vetevendosje? […] You should be ashamed,” Konjufca said.

With a drowsy prime minister at the Assembly, PDK MP Ganimete Musliu said that the EU should be ashamed for, according to her, isolating Kosovo citizens. Ratification of the border demarcation deal is one of the two remaining criteria for Kosovo’s visa liberalization for the Schengen Zone.

“Our citizens do not deserve this isolation and the EU should be ashamed because we are also part of Europe. We should unite for issues of national interest, deal with them and give citizens free movement,” Musliu said.

In his last word around midnight, Prime Minister Ramush Haradinaj thanked MPs for the discussion and reiterated Montenegro’s stance on the agreement.

“Montenegro is willing to go along with findings and be part of a joint commission. I want to retain the right to correction, but please help me,” Haradinaj said.