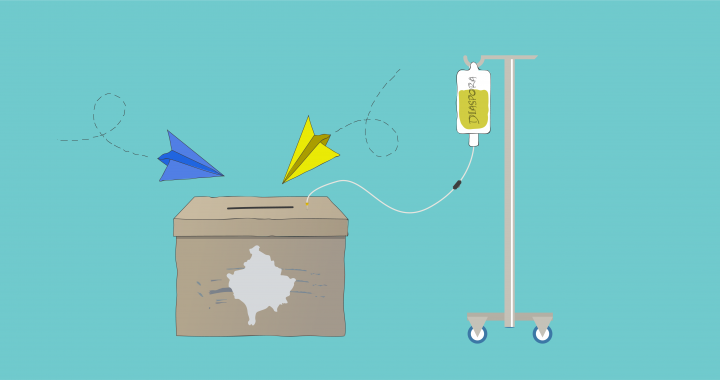 Voting possibilities for diaspora members can be a driver for democratic development in Kosovo.

While the economic, social and cultural contributions made by the Kosovo diaspora for their home country is well-recognized, their contribution to the direct democratic process – namely, elections – has been met with continuous obstacles.

Kosovo citizens that live abroad are entitled to voting rights as per the country’s constitution. However, experience so far has shown that the voting process for diaspora members is complicated and riddled with technical, administrative and legal snags.

In the best case scenario, diaspora members from Kosovo faced many difficulties while participating in the voting process. Worst case scenario, it can be said that they were denied a right guaranteed by the constitution and laws in force. Yet, these problems have had no proper resolution, because voting from abroad is seen as a secondary issue in the debate for electoral reform in Kosovo.

According to data from the 2011 census, over 40 per cent of migrants have settled in Germany and Switzerland. It is estimated that over 300,000 of them can vote.

During the early parliamentary election in June 2017, only 20,354, or 6.8 per cent, of diaspora members applied to register for voting. The Central Elections Committee, KQZ, approved 15,118 applications. Despite of that, only 5,949, 30 per cent of the applications, sent ballots, and only 5,246 were deemed valid.

This was also the case during municipal elections and the runoff in October and November 2017 respectively, which were characterized by a low turnout from the diaspora, half as low in comparison to the national elections.

Kosovo has historically enjoyed the engagement and attention of the diaspora, despite a lack of policies or institutions concerning diaspora in the country.

Today, the diaspora constitutes one of the largest economic contributors, with diaspora remittances generating 15 per cent of the country’s GDP. Migrants who left during the last few decades, grasping opportunities in developed societies, have built capacities of European and Western standards in all fields, which compatriots in Kosovo were not able to do. This potential becomes even more important due to the constant, strong link between diaspora members and their home country, as well as their willingness to contribute.

Considering that the general turnout for elections in Kosovo is low, 41.3 per cent in the last elections, a large participation of diaspora voters would have a significant effect on increasing democratic legitimacy in the country. Since political parties in Kosovo constantly talk about the promotion of democracy, then it is time for them to prove their commitment by facilitating the voting process for our diaspora.

Further, considering the lack of economic dependency of the diaspora on political parties in Kosovo, and seeing the trend of diaspora members voting against the governing political establishment in the country, in the last parliamentary elections,  it could be an added contribution to the democratization of political parties because it exerts pressure for domestic change. As a result, having voting possibilities, the diaspora could become a driver for democratic change and progressive developments in the country.

The low turnout of diaspora members is a result of multiple obstacles. During meetings with diaspora exponents, NGO Germin identified some of the main problems with the voting process.

So, besides the fact that they need tools such as printers and scanners to fill out their applications and ballots, sending their vote through post in the current format does not ensure its validity because regulations require the votes to reach the KQZ no later than the day of elections.

Although the trend of participation is growing as opposed to ten years ago, the big difference between the general number of individuals with voting rights and ballots shows that there is a need for change in the process and voting facilitations from the outside, including the possibility of alternative voting methods in addition to postal voting.

A report by the Kosovo Ombudsperson published this August raised concerns over the denial of voting rights of Kosovo citizens that live abroad. The report, which was sent to the president’s office, the assembly, the government and the KQZ, recommends changes or amendments to the current legislation on elections in order to enable diaspora members to carry out their voting rights like all other citizens in the country. Following this report, there was an initiative by assembly members from the Parliamentary Commission for Legislation in order to make the necessary changes in the Law for General Elections.

So as to avoid current problems and increase participation of citizens who live abroad in elections, there are various alternatives that can be grouped into a few key points, with consideration of the circumstances in Kosovo.

First and foremost, it needs to be set out that only citizens who have documents from the Republic of Kosovo can vote from abroad.

Postal voting cannot be excluded as a possibility, but some changes need to be made in order to improve it. Allowing more time for ballot reception from the diaspora, one or two additional days, would increase the number of received votes, considering that many votes are rejected if they arrive after the deadline. One alternative would be to extend the deadline for two more days after election day, on condition that ballots are sent out before the day of elections (based on the postal stamp from the country of dispatch).

Another possibility would be to put KQZ mailboxes in diplomatic missions of Kosovo, so that diaspora members can send their ballots through post in the countries where they reside. These envelopes would then be sent to the KQZ by the missions. This would circumvent the possible loss or return of postal shipments that go through Serbia, and it would also accelerate and increase the security of the process. Of course, although postal voting is the easiest to organize, many experts see it as an unreliable means of voting.

Thus, in order to offer equal access for citizens abroad, based on the recommendations of the Ombudsperson, the Republic of Kosovo needs to institute measures to organize physical voting in diplomatic and consular missions wherever it is possible. Physical voting is more expensive and requires more operational resources, but it is the most secure way of voting, and it offers real possibilities for participation from citizens abroad. Some diplomatic missions could organize diaspora voting with planning and support from the KQZ. The votes would be counted on the spot, and the results would be sent to the KQZ, scanned and through a single and secure envelope to Kosovo.

Selecting an embassy or consulate for a specific region that would serve several countries would help a large number of diaspora voters to travel not too far in order to vote. This would help save money and time because diaspora voters would not have to come to Kosovo to vote. This means of voting is applied in over 50 different countries, who see the participation of compatriots abroad as crucial.

Physical voting is costly, but it is very important for Kosovo in order to strengthen ties with the diaspora even further, and offer equal opportunities for participation and decision-making. Kosovo institutions need to carry out the necessary actions in order to enable citizens abroad to take advantage of a right that is guaranteed by the constitution. The time is ripe for the diaspora to become a direct contributor to the development of democracy in Kosovo, and not only an economic contributor through remittances.

This article is part of a series of op-eds published on Prishtina Insight as part of a project called Leveraging Diaspora for Policy Development from NGO Germin. This article was produced with the support of the Democratic Society Promotion, DSP,  a project financed by the Swiss Agency for Development and Cooperation, SDC, and the Danish Foreign Ministry, DANIDA, and managed by the Kosovo Civil Society Foundation, KCSF. The content of this article does not necessarily reflect the views of donors and implementers.

Lirim Krasniqi holds a master’s degree in political science for international development and political theory from the University of Tirana and studied for one year at Alexandru Ioan Cuza University in Iasi, Romania through Erasmus. Krasniqi is a policy analyst and researcher in the fields of foreign politics and security, political parties, democracy development and diaspora issues. He currently works at NGO Germin.