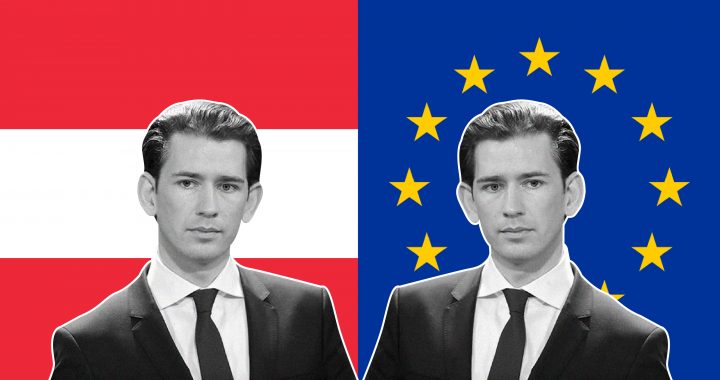 Tuesday’s press conference with Austrian chancellor Sebastian Kurz was littered with uncertainties, displaying a lack of unity with European perspectives on the Kosovo-Serbia dialogue, visa liberalization and border correction.

After meeting with Kosovo president Hashim Thaci, the Austrian chancellor’s words in a press conference held in Prishtina on Tuesday left Kosovo citizens with more questions than answers as he discussed Kosovo’s path towards European integration.

Beginning the conference with a repetition of the conventional phrase worn out by officials across the EU political spectrum, Kurz hailed that “the Western Balkans has a European perspective.”

32-year-old Kurz is the youngest chancellor in Austria’s history, and the chairman of the Austrian People’s Party, a center-right political party supportive of European integration that took office in December 2017.

Kurz, who on Monday paid a visit to Belgrade and met Serbian President Aleksander Vucic, also met Kosovo’s Prime Minister Ramush Haradinaj. In a short press conference with Haradinaj, the chancellor shortly expressed support for bilateral relations between Austria and Kosovo, economic cooperation, the continuation of the dialogue between Kosovo and Serbia and Kosovo’s ‘European perspective.’

During his press conference with President Thaci, the rhetoric of European perspective faded away when Kurz was asked about the visa liberalization process, which remains in a period of limbo for Kosovars.

Kurz turned the focus instead to the dialogue between Kosovo and Serbia, a process which has never been a technical criteria presented for Kosovo to go forward with the visa liberalization process.

“The expectations of the European Union are in the field of rule of law. Our main priority is the dialogue between Kosovo and Serbia,” said Kurz.

If Kurz speaks in the name of EU foreign policy, we must ask, when did the European Union add the dialogue between Kosovo and Serbia to the criteria for the process of visa liberalization?

Unfortunately, this shift in focus was not a matter of lapsus linguae. Today’s appearance of the chancellor was marked with another ambiguous statement when mentioning EU policy.

Despite the fact that Austria has been a staunch supporter of Kosovo’s independence and its initiatives for membership in international organizations, Kurz has clearly stated that the borders of Kosovo that were recognized back in 2008 are volatile and could change.

“The federal government of Austria agrees with any agreement between Prishtina and Belgrade, even if it includes border correction or land swaps, and this is supported by the European Union,” he said.

One cardinal issue must be raised here. Is Kurz again representing the foreign policy of the European Union, as he clearly stated, or that of Austria?

Since the term “border correction” was coined, the EU has maintained an ambiguous stance on the issue. Regardless of Kurz’s statements, perhaps the EU should clarify its position. While Kurz confirmed that border correction would be a solution the EU would support, his neighboring country and one of the EU’s driving force, Germany, has repeatedly rejected the proposal.

Kurz’s discourse reveals a lack of unity in the EU with its foreign affairs policy relating to Kosovo and Serbia, or at best a lack of understanding of the EU’s stance on the matter. This leaves room for authoritarian leaders in the Balkans to invent further problems, along with their solutions, to facilitate their reign and solidify their image as stable leaders.

The chancellor went further by instructing citizens to be more supportive to their leaders and their ideas for border change.

“I want to thank you, Mr President, but as well President Vucic for your efforts, and I ask all citizens of Kosovo to support these efforts because this is the effort needed for European integration,” he said.

If the chancellor is genuinely interested in consensus and the support of citizens in this process, it is strange that he overlooked the massive protest held in September, when Kosovo citizens marched against the idea of the border correction.

Not only have the opposition parties rejected such ideas, but governing coalition parties joined the ranks as well, alongside prime minister Ramush Haradinaj, who engaged in a war of words with the protagonist of the border changes proposal — the president.

“Stability” was not a term absent from Tuesday’s conference, and remains one that dominates political discourse in the Western Balkans. Kurz’s political prose sounded like it was coming from the mouths of the stabilocrats themselves, Thaci and Vucic.

Unfortunately, diving into Kurz’s past political behavior brings up an analogous case when, acting then as Foreign Minister of Austria, Kurz rallied in support of former Macedonian prime minister Nikola Gruevski in 2016. Today, the alternations in power in Macedonia have made Gruevski’s administration a black mark in their recent political history for his malicious regime that was marked with corruption, nepotism and state capture.

While Kurz called for more support and understanding for the presidents in their border correction efforts, hailed as a beacon for stability, the transformation of Kosovo Security Force into an army instead elicited a warning against independent action.

“As for the Kosovo army, we are very skeptical, and certainly we expect regular dialogue with international partners. We need to be more careful, and ensure measures do not destabilize the region,” said Kurz.

So, for the Austrian chancellor, Kosovo citizens should support a proposal of land swaps, which have found wide objection from political parties in Kosovo, but should beware when it comes to issues of transforming the Kosovo Security Force. An army in Kosovo would, it seems, shift the global balance of power.

Such “skepticism” from Chancellor Kurz alludes to the hegemonic perspective lying behind his policy towards smaller nations.

*Headline in English: We do not understand you, Mr. Kurz.