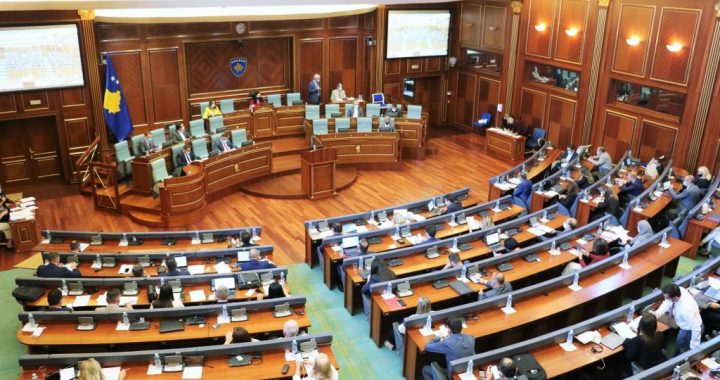 The government-backed Draft Law on Economic Recovery - COVID-19 passed the first reading at the Kosovo Assembly on Monday, after six previous failed attempts.

The government proposed Draft Law on Economic Recovery – COVID-19 passed the first reading at the Kosovo Assembly on Monday, with 64 votes in favour, no abstentions and no votes against. The law will now be reviewed by the relevant parliamentary committees, who may propose amendments before a second reading at the Assembly.

The draft law aims to provide economic relief for businesses affected by the coronavirus crisis, and includes a proposal to allow citizens to withdraw 10 percent of funds from their account with the Kosovo Pension Fund. However, after being approved by the Government on July 22, the draft law had failed to find support at the Assembly, failing to pass the first reading six times prior to Monday.

On Friday Oct. 9, after a sixth failure to pass the bill on Oct. 8, Arben Gashi, the head of LDK’s parliamentary group, proposed an extraordinary Assembly session to vote on the draft law after securing the signatures of 61 MPs.

At the extraordinary session on Monday, Vjosa Osmani, the Speaker of the Kosovo Assembly, criticised the government for not cooperating with the Assembly in order to help the bill pass. Despite voting in favour of the draft law herself, Osmani warned that if the government does not sit with the opposition to discuss possible amendments, the law “would not have support in later stages, including in the second read.”

She also criticised Prime Minister Avdullah Hoti for not attending the extraordinary session himself. “Instead of cooperating with any of the MPs of this legislature, you have shown an arrogance I have not seen in the four mandates that I have been an MP at this Assembly,” Osmani said.

Before the vote, opposition MPs continued to criticize the draft law. Vetevendosje MP Hekuran Murati stated that the name of the draft law does not correspond with the content of the package. “It has nothing to do with economic recovery and therefore we continue to have the same position,” he said.

Vetevendosje have criticised the package for failing to support the most vulnerable groups in society. In a parliamentary discussion on the draft law in August, Murati claimed that gastronomic businesses only received a 10 percent cut on VAT due to having a strong lobby and stated that the poorest in society would not benefit from being able to withdraw from the pension fund.

“Those who will benefit the most will be those who had regular salaries, and a higher income than the average wage in Kosovo,” Murati said in August. “The most affected part of our society will not be impacted by this measure, and the priority must be those who have no money in the Kosovo Pension Fund.”

On Monday, PDK MP Abelard Tahiri also stated that the package would not bring about economic recovery. “This proposal that we have in front of us can be called anything, but not an emergency economic package,” he said.

PDK have proposed an amendment to the draft law, which the party claims will better support the private sector, and allow more funds withdrawn from the pension fund to return to the state.