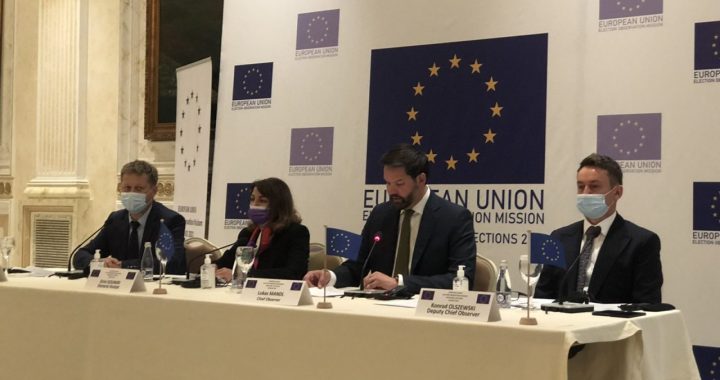 The head of the EU Election Observation Mission in Kosovo, Lucas Mandl (second right), presents its preliminary findings on the Kosovo mayoral election run-offs on Tuesday in Pristina. Photo: BIRN.

The European Union Election Observation Mission said that the weekend’s run-off polls in 21 Kosovo municipalities were competitive, but some Facebook pages were used to “spread misleading content” about candidates.

The EU Election Observation Mission said on Tuesday that non-transparent Facebook pages were responsible for “manipulative interference” in Sunday’s mayoral election run-off contests, spreading misinformation about rival parties and candidates, although the polls were well-organised.

“While candidates shared useful information through online platforms, opaque Facebook pages were used to spread misleading content hampering the voters’ ability to form opinions free from manipulative interference,” the Election Observation Mission said in a preliminary assessment of the conduct of the vote.

“Candidates generally used advertisements to promote their campaign platforms but third-party ads were largely used to discredit contestants, including with personal accusations,” the statement added.

The head of the mission, Lucas Mandl, who is member of the European Parliament, told media in Pristina that in general, the run-off elections were “well administered and competitive”.

“The campaign was vivid and peaceful, though its tone was harsher compared to the first round. However, in the absence of sanctions for campaigning outside of the official five-day period, most candidates were canvassing long before the official campaign kicked off,” Mandl said.

The preliminary statement also said that blatant lack of transparency related to the financing of contestants’ campaigns persisted in the second round.

“Perpetuating the low enforcement of campaign finance rules, the Kosovo Assembly is unable to guarantee timely audit of the disclosure reports and the CEC [Central Election Commission] did not sufficiently support the implementation of applicable regulations,” the statement said.

The EU mission said that in the absence of sanctions for campaigning outside of the official five-day period, “most candidates were canvassing long before the official campaign kicked off”.

“Candidate rallies were attended by leaders of the major parties, including by Prime Minister Albin Kurti and his ministers while LVV [ruling Vetevendosje party] candidates often portrayed themselves as the guarantors of projects financed from the central budget. Moreover, between the two rounds, the government announced a temporary increase of social benefits which led to opposition’s accusations of indirect vote buying,” it said.

Voters in 21 out of 38 municipalities went to the polls to elect new mayors in a run-off vote which was held four weeks after 17 mayors were elected in the first round.

The election result produced a disappointment for Vetevendosje, which won only four of the 12 municipalities in which it was competing, and lost in the capital Pristina.