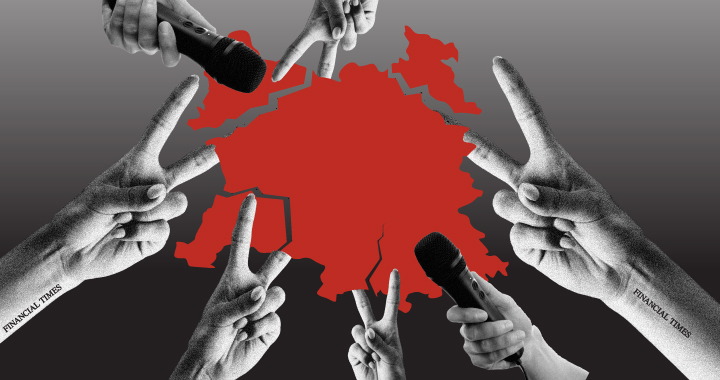 An article written by the editorial board of the Financial Times vocalized its support for the territorial swap proposal between Kosovo and Serbia this week, hinging the viability of border correction on an unrealistic scenario of EU recognition.

The Financial Times has joined a growing chorus of newspapers, “experts,” and former diplomats in supporting a land swap deal between Serbia and Kosovo. Last month, Hashim Thaci, Kosovo’s president and the key proponent of  the border correction proposal, published an article in the Financial Times supporting the idea.

Though the details of the proposed deal remain vague, The Financial Times editorial board solemnly notes that conflict resolution “often requires leaders to take bold and even previously taboo steps.” If done correctly, such a deal, they argue, would bring “peace and stability – not renewed fragmentation – in a troubled region.”

It is a very curious argument, not least because the majority of the editorial in fact outlines the potential pitfalls of such a deal. This “essentially ethnic-based land swap” would, the editorial accepts, hardly cohere with Western values, and would not assuage the majority of Serbs in Kosovo who live south of the river Ibar.

The article also notes that such a move could have profoundly negative repercussions throughout the region – particularly in Republika Srpska – as it would likely embolden others to (re)assert their separatist claims. Finally, the deal is, they note, likely motivated by Vucic and Thaci’s own personal interests rather than their genuine commitment to their respective constituents.

And yet, despite these well-known and widely heralded arguments, the editorial comes out in favour of the idea, the key reason being because it would supposedly convince the five EU states that currently do not recognize Kosovo, as well as “other countries globally,” to do so. These recognitions would, so the argument goes, “transform the ex-Serbian province into a viable standalone state.” Though presented as rational and progressive, this argument is built on an illusion.

It is worth noting that there is no guarantee that a land swap deal will lead to a sudden deluge of recognitions; but let’s accept the argument that it would. While some appear to see recognition as some kind of panacea, the reality is that recognition in itself cannot transform Kosovo into “a viable standalone state.” Of course, Kosovo’s development is inhibited so long as it is prevented from joining the EU and the UN by those powers that refuse to recognize it, but even post-recognition significant problems would remain.

The idea that Kosovo will join the EU as soon as Spain, Romania, Slovakia, Cyprus and Greece recognize it is unrealistic at best, if not a fantasy. Even after recognition, EU membership could take many, many years due to “enlargement fatigue” and prolonged political machinations (as Turkey – “candidate for full membership” since 1999 – can attest).

Additionally, many recognized states are beset by an array of problems. The fact that a state’s flag flies outside the UN building in New York does not automatically mean that it is capable of exercising effective control of its territory internally, or withstanding malign external interference. Ukraine, Bosnia, Somalia, South Sudan, Yemen, Myanmar(and many others are all recognized states beset by an array of debilitating internal and external problems.

Therefore, after recognition, Kosovo’s security, development and prosperity would remain dependant on meeting a range of internal and external challenges that the act of recognition in itself would not necessarily solve. In fact, recognition could – if predicated on the land swap deal – exacerbate these problems.

In this respect, in response to the “support-land-swap-to-get-recognition” argument, it is worth asking five questions relating to the key issues which have continued to inhibit Kosovo’s progress to date. would recognition of a new rump Kosovo.

Would recognition cure the country of the endemic corruption that has caused so much damage? Restore faith amongst the public in Kosovo’s government? Improve inter-ethnic relations? Make the territory more viable as an independent entity? Would recognition guarantee that Serbia would no longer seek to interfere in Kosovo’s internal affairs and commit to making reparations for the damage caused in the 1990s?

The answer to each is surely no. First, a deal followed by recognition would naturally be presented by Thaci as a huge personal victory that he would use to cement his – and his cronies – power-base in Kosovo. Second, if – as was the case with both the Specialist Chambers and the border deal with Montenegro – Kosovo’s parliament acceded to external pressure and agreed to the deal without public support, then this would naturally foment more popular anger within Kosovo.

Third, an ethnic land swap would surely deepen divisions between Albanians and Serbs in Kosovo and embolden those on both sides who claim that co-habitation is impossible. Fourth, in terms of Kosovo’s economic viability, it is difficult to see how losing municipalities in the north would not weaken the country in terms of its access to natural resources and income.

Finally, it is surely inconceivable that absorbing the northern municipalities of Kosovo would remove Kosovo as a political issue within Serbia. It would, rather, represent a victory for nationalists there and suggest that “reclaiming” Kosovo at some point in the future remains realistic. The important orthodox sites in Gracanica, Peja and Decan are not to be included in the proposed land swap and thus would remain a significant matter of interest to a particular constituency within Serbia.

External support for the land swap is reflective of a particular worldview, one which has historically dominated how outsiders have viewed and treated the Balkans. It is characterized by a belief in the ordering power of borders. The world map gives the impression of order; there are distinct regions – “Asia,” “Europe,” “South America” etc – and there are the states, each clearly marked and labelled. Thus, some view maps and the states they illustrate the way a scientist views the periodic table; lines which neatly separate elements into categories and columns, with a distinct label attributed to each.

It all looks very neat, and thus adherents to this view have a particular fondness for political maps, but little regard for the people who live within the lines drawn. Political and social problems are perceived as somehow the function of a misplaced border; the solution is thus to draw new lines.

Historically, redrawing borders in the Balkans without the consent of the people forced to live within new states has proved to be a source of instability and ultimately conflict. There is, indeed, something inherently colonial about people who despite having never lived in – or in certain cases even been to – a particular country, cheerfully suggesting it should be carved up for its own benefit.

Ultimately, if Kosovo’s borders are redrawn in the Financial Times’ vision, then the new “Kosovo” would risk becoming what Robert Jackson terms a “quasi-state,” namely a state in name alone, lacking internal legitimacy, vulnerable to external interference, and fundamentally unstable.