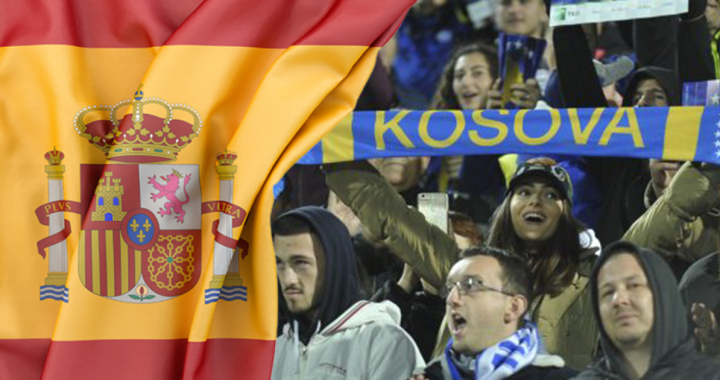 Madrid’s constant opposition to Kosovo on the international stage has produced little more than political embarrassment, and Spain must understand that diplomatic cordiality can be possible even without recognition.

Last week’s events surrounding the Kosovo men’s football team’s trip to Seville later this month again proved that Spain remains the most stubborn of the five EU member states not to recognise Kosovo, and that Madrid has become Prishtina’s toughest nut to crack.

Ever since Kosovo’s declaration of independence in 2008, Spain’s approach has been characterised by both reluctance and neglect, and it has repeatedly turned its back on potential opportunities to engage in unthawing bilateral relations.

Madrid’s thirteen-year ‘out of sight, out of mind’ policy regarding Kosovo has also proved highly susceptible to spilling over into non-political realms, and with no attempts at rapprochement being made, history is bound to keep repeating itself.

Last week, it was the turn of the Royal Spanish Football Federation, RFEF, to be the subject of heavy criticism and forced into an about-turn. In a public statement on its website on March 9, the RFEF referred to Spain’s men’s senior team’s upcoming international matches as being played against Greece, Georgia, and “the territory of Kosovo.”

On the same day, Spanish sports daily newspaper Marca reported that the Kosovo flag would not be displayed next to the Spanish flag prior to kick-off and that its anthem would be announced as “music donated by the territory of Kosovo.” Further reports suggested that these decisions had been made due to pressure applied by Spain’s Ministry of Foreign Affairs.

The reports in Marca and the terminology used in the Spanish Federation’s statement sparked controversy in Kosovo, where the prospect of being denied treatment as an independent state was described as “unacceptable.” A press release from the Kosovo Football Federation (FFK) stated that Kosovo would only play under the FIFA and UEFA regulations, which stipulate the display of national symbols.

According to a follow up statement made the next day by the FFK, a phone call from senior officials at the RFEF smoothed over the incident, with assurances made that the match would take place in accordance with FIFA and UEFA regulations. Regardless, the game between Spain and Kosovo is hardly two weeks away, and all eyes will very likely be fixed on political symbolism rather than the pitch.

This is not the first time that Spain’s diplomatic whims have undermined Kosovo’s right to equal treatment. Over the years, Spain has rather obsessively clung to explicit demonstrations of rejection of Kosovo in order to satisfy its own search for political reaffirmation.

To justify this, authorities in Spain have often been outspoken about the rationale behind their refusal to recognize Kosovo, which is routinely cited as a desire to adhere to international law.

Many observers have pointed towards Spain’s internal struggles with secessionist movements in Catalonia and the Basque Country as the underlying motivation, although Madrid has systematically denied this. “It is unrealistic to compare Spain and the Balkans,” Spain’s former Deputy Prime Minister María Teresa Fernández de la Vega said in 2010.

However, as much as Spain’s successive governments have attempted to downplay it, the fear that even the smallest sign of acknowledgement of Kosovo’s sovereignty could justify similar efforts for self-determination at home is still very real, and it shows. Not least at a time when Catalonia’s independence movement is active and strong.

It is very clear that Spain is currently dealing with a full array of domestic crises, but under no circumstance should this be considered grounds for the Spanish state to hamper Kosovo’s limited opportunities to assert itself as an independent state internationally.

The government in Madrid is trapped in its own illusions. Its belief that vocal opposition towards sharing a space with Kosovo endows it with credibility and resilience regarding the challengers of Spain’s territorial integrity is nonsensical.

Furthermore, Madrid is also still unable to grasp that it is completely unnecessary to engage in these explicit demonstrations of rejection in order to emphasise its political stance towards Kosovo. All continuations of this approach, such as that seen last week, are a wasted opportunity to understand that non-recognition of Kosovo and diplomatic cordiality can be compatible with one another.

Ignoring this possibility, Spain has continued to stick to what it considers a pragmatic approach. Namely, that dealing with occasional diplomatic struggles at a few summits and sporting events every other year is still more profitable and sustainable in the long run than facing the potential backlash of political rapprochement with Kosovo.

At state level, the initiation of an informed and honest political debate around Kosovo has never been considered, either due to neglect or nervousness. This overall feeling is a reflection of that amongst the Spanish public, who are mostly torn between disinterest towards the issue and fear that approaching Kosovo constructively would justify Catalonia and the Basque Country’s independence efforts.

Spain must urgently engage in a thorough and serious public discussion in order to detach Kosovo’s sui generis case from any domestic resemblances once and for all. Only a brave process of national introspection can put an end to the haunting fear of comparisons between the self-determination movement by Kosovo Albanians and pro-independence groups in Spain.

It is now in the hands of the Spanish authorities to engage in a non-obstructive approach towards Kosovo and avoid future episodes of diplomatic embarrassment. In order to achieve this, it will first have to let go of its angst over sharing a common space with Kosovo – after all, tricks and pirouettes work better on the football pitch than they do in diplomacy.

Alejandro Esteso Pérez is a political analyst and researcher. His research focuses on EU enlargement, corruption, elections, and party politics in the Western Balkans.