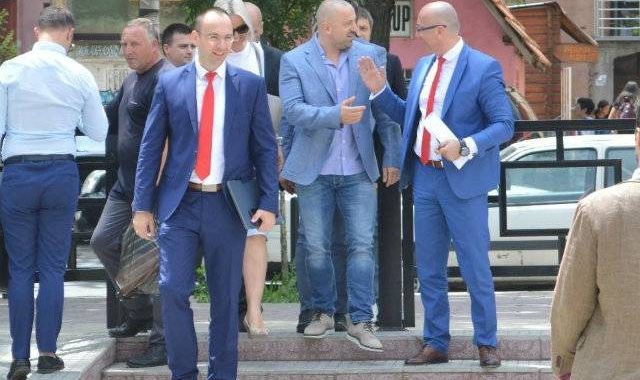 Milan Radoicic, a powerful Kosovo Serb businessman and politician, returned to Kosovo after a court revoked a warrant for his arrest for alleged involvement in the assassination of rival politician Oliver Ivanovic.

Milan Radoicic, who was wanted for arrest as the alleged leader of an organised criminal group responsible for the murder of political party leader Oliver Ivanovic in January 2018, has returned home to Serb-majority northern Kosovo after being on the run for more than two years, police told BIRN.

Police said Radoicic re-entered the country on Tuesday, after Prishtina Basic Court revoked a warrant for his arrest on March 1. His jeep with Belgrade plates has since been spotted in the street in the north of the ethnically-divided Kosovo town of Mitrovica.

Radoicic, a businessman and vice-president of the Belgrade-backed Srpska Lista party who has been described as the real power-holder in northern Kosovo, has denied involvement in the killing of political rival Ivanovic.

A few days after the withdrawal of the warrant for Radoicic’s arrest, Syle Hoxha, a retired special prosecutor who investigated the Ivanovic murder case, told BIRN that court’s decision was unexpected.

“I had evidence against him. The revocation of the arrest warrant could harm the process,” Hoxha said.

The indictment for the murder of Ivanovic alleged that Radoicic and another prominent Kosovo Serb, Zvonko Veselinovic, were leaders of the criminal group responsible for the killing, and accused several policemen of aiding the crime.

In November 2018, Kosovo police special forces tried to arrest Radoicic, but did not find him at home in Mitrovica. Instead, they said they found 75 grammes of cocaine. Radoicic fled to Serbia and again denied any wrongdoing, accusing police of seeking to kill him.

Officials from Serbia’s ruling Progressive Party, which supports Srpska Lista in Kosovo, have defended Radoicic from the accusations.

“Milan Radoicic is not a flower, but he did not in any way participate in the liquidation of the leader of the Freedom, Democracy, Justice citizens’ initiative, Oliver Ivanovic,” Serbian President Aleksandar Vucic said in July 2019.

Ivanovic, the leader of the Freedom, Democracy, Justice party, was gunned down in front of his party’s office in Mitrovica on January 16, 2018.

Six other suspects, all Kosovo Serbs, pleaded not guilty last month to involvement in the murder.

Nedeljko Spasojevic, Dragisa Markovic, Zarko Jovanovic, Rade Basara, Marko Rosic and Silvana Arsovic are accused of participating in or organising a criminal group, misuse of office, assisting in a murder, possession of illegal weapons, disclosure of official secrets and misuse of evidence in relation to the Ivanovic case.

Spasojevic, Markovic, Jovanovic and Basara were all Kosovo police officers before they were arrested. Arsovic, a former employee of Ivanovic’s party, is accused of turning off the power at his party’s office so the closed-circuit television cameras did not work when Ivanovic was shot.