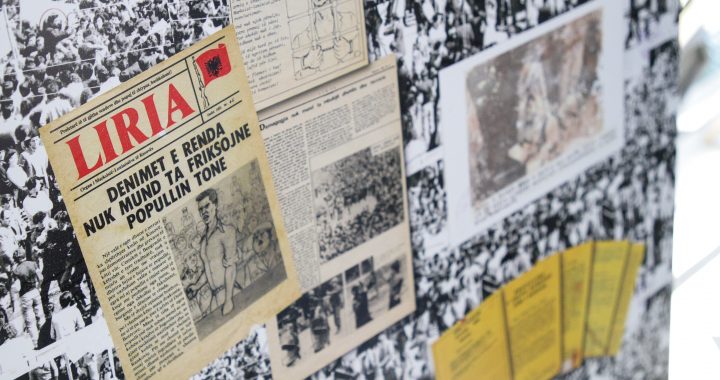 A new exhibition has been opened in the student canteen at the University of Prishtina, where historic protests broke out on March 11, 1981.

A new exhibition was opened on Thursday to commemorate the 40th anniversary of historic protests by Kosovo Albanians, which began at the student canteen at the University of Prishtina on March 11, 1981.

The “Vullkani i Republikes” (“Volcano of the Republic”) exhibition was opened by the Kosovo State Archives Agency and features photographs from the protests and other memorabilia. It will be on display at the student canteen until March 13.

Opening the exhibition, Hydajet Hyseni, Chairman of the Organising Council for Commemorating the 1981 Demonstrations, said that the student movement “best expressed the problems that Kosovo faced at that time, as well as its demands.”

The 1981 protests began with Kosovo Albanian students demonstrating against long waits for poor food provided by the University, but led to calls for Kosovo to become an independent republic.

The student revolt escalated into a chain of protests across Kosovo that April, with the Yugoslav authorities imposing a state of emergency and sending in security forces to crush the demonstrations. The New York Times reported that “nine people died and more than 50 were injured” in violence across six cities.

A cornerstone for a new memorial commemorating the protests was also laid outside the student canteen at the University of Prishtina on Thursday.

Present at the event, Mayor of Prishtina Shpend Ahmeti stated the importance of memorialising the demonstration. “The basis of the Kosovo state is in the 1981 protests – in this revolt by students and their demands,” he said.