Tackling the stigma against people living with HIV is not only a moral issue. A new survey reveals how discriminatory behaviour from health professionals in Kosovo creates barriers to accessing healthcare, leaving Kosovo with one of the lowest testing coverages in Europe.

Alban Gjonbalaj has an incredibly difficult job. He spends his time reaching out to people who, like himself, have tested positive for HIV in Kosovo, encouraging them to seek medical treatment and support for themselves and their families.

Sitting with Prishtina Insight, Gjonbalaj, who founded KAPHA, the Kosovo Association for People Living with HIV/AIDS, recounts one of the toughest moments he has experienced working with a fellow person living with HIV.

“He had to go and get a normal scan at the hospital – we have to go for a lot of regular checkups,” Gjonbalaj says. “This test didn’t even require a blood sample, but the doctor refused to do it. He said that he was new to the job as an excuse, and wouldn’t touch him.”

A new survey measuring the nature and prevalance of stigma and discrimination towards people living with HIV shows that this experience is likely to be far from unique.

The survey was published in February by human rights NGO Integra and examines attitudes within Kosovo’s health and rule of law institutions. It reveals high levels of misunderstanding and intolerance among those working closely with people living with HIV. 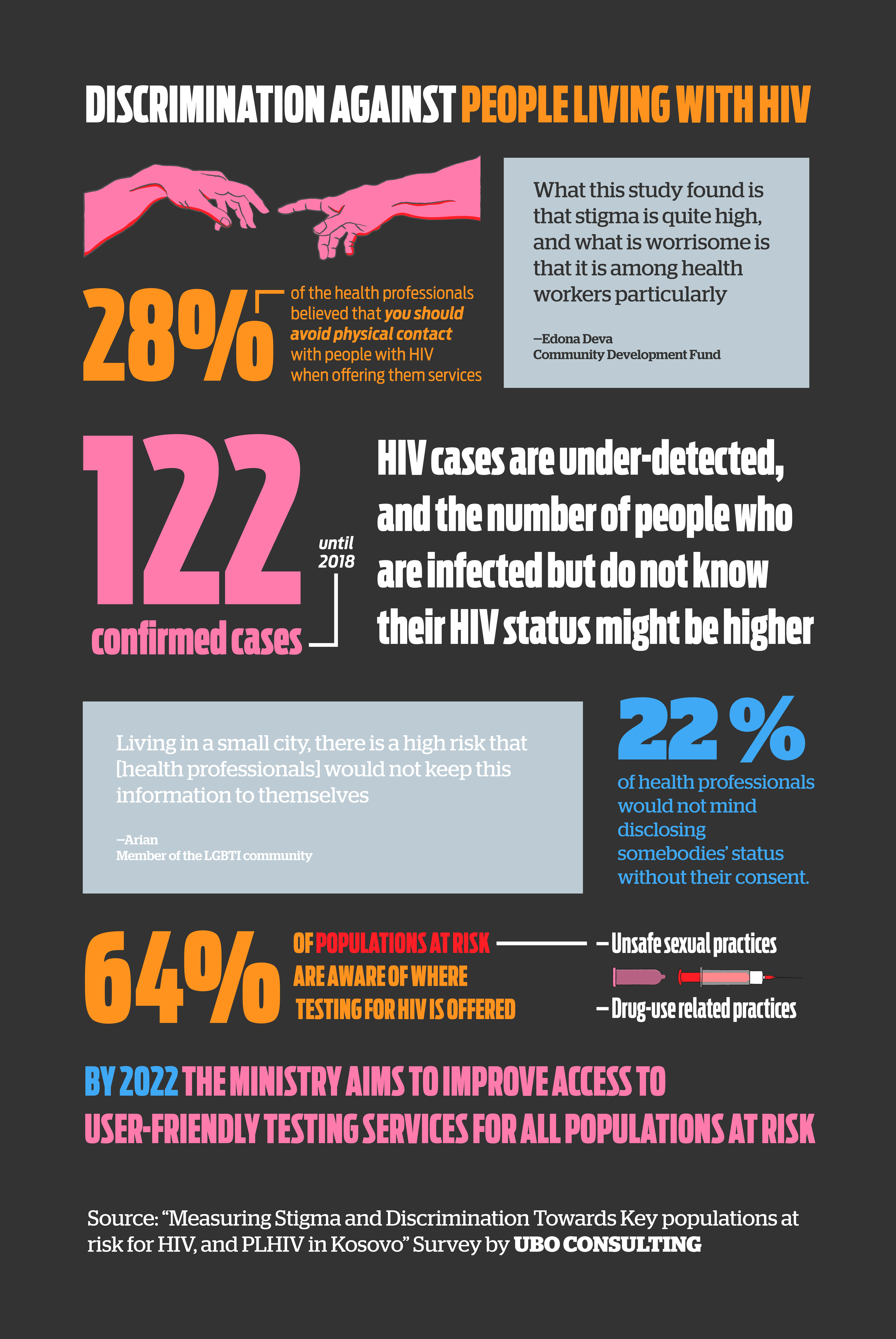 Around half of the health professionals surveyed “would be worried about touching the clothing of a person with HIV,” while nine per cent responded that they would refuse to do so. Twenty-eight per cent believed that “you should avoid physical contact with people with HIV when offering them services,” an unnecessary additional precaution that qualifies as discrimination.

Since 2008, Edona Deva has coordinated the HIV program at the Community Development Fund, an NGO that helped conduct the study and works to build the capacities of local organisations addressing HIV. While Deva was not surprised by the results of the survey, she says that this is the first concrete evidence of the level of stigma towards people living with HIV in Kosovo.

“What this study found is that stigma is quite high, and what is worrisome is that it is among health workers particularly,” Deva says. “In the findings, you can see that those who deal with people living with HIV – who have to take blood samples, take care of their wounds – they are less willing to do that than with other people.”

Gjonbalaj believes the stigma associated with HIV is deeply rooted, stemming from a culture of shame around the disease that is exacerbated by a lack of education and understanding. This same stigma prevented the man who was refused service at the hospital from seeking justice.

“I managed to convince him to try and pursue the matter in court, and we sent a letter to the Ombudsperson to start proceedings,” Gjonbalaj says. “But once his family heard what we were planning to do – forget it. They refused to take the issue further.”

One of the most shocking results from the survey is the revelation that 39 per cent of people surveyed believe people with HIV deserve to contract the illness. On the other hand, 38 per cent of respondents disagreed with the statement, revealing a polarisation amongst health workers in their personal tolerance towards at risk groups.

“My generation is split, there’s no middle ground,” he says. “They are either very progresive people who know how to adapt to change, or they are people who are very reluctant to get informed, be inclusive and accept people regardless of things that might make them different from the ‘average person.’”

Both KAPHA and the Community Development Fund have been engaged in training public sector officials that deal with at risk groups in their professional capacity. This has not been an easy task, says Deva, especially when public institutions are involved.

“Talking about people who inject drugs, men who have sex with men or female sex workers is very challenging in a country that is still very conservative and patriarchal,” she says.

In Gjonbalaj’s opinion, the most important thing is to ensure that employees understand their professional and ethical obligations to respect people that they come into contact with in their everyday work.

“In the training we’ve done with professionals, we have stopped focusing on stigma,” he says. “I have changed my tactics over the last two years and began putting the law first. When people understand that this is the law, and you could be charged, then they start to change their thinking.”

Deva agrees that a focus on changing individual opinions has been fruitless so far, and until a societal shift in mindset is possible, ensuring that people may be held legally accountable for a failure to respect people’s rights is the best option.

“We are not trying to change the behavior of every health worker in the country, that’s a very difficult thing. The training won’t change behaviour,” she says. “At the end of the day, we just want them to be on the same page as us regarding people’s rights and what it means to perform their duties on the basis of ethical obligations.”

This stigma has one particularly damaging consequence – testing amongst those at risk of contracting HIV is incredibly low, risking an increase in the spread of HIV infections and distorting figures on the number of people living with HIV.

Kosovo is currently understood as a ‘low prevalence country’ in terms of HIV, with a total of 122 confirmed cases up until 2018. However, the Ministry of Health’s four-year HIV/AIDS Strategic Plan from 2018 acknowledges that data on testing coverage in Kosovo is absent, and any statistics related to the prevalence of HIV in Kosovo may not be reliable.

“HIV cases are under-detected, and the number of people who are infected but do not know their HIV status might be higher,” the plan states. According to the Community Development Fund, estimated testing coverage among at risk groups in Kosovo stands at less than 10 per cent, among the lowest in Europe. 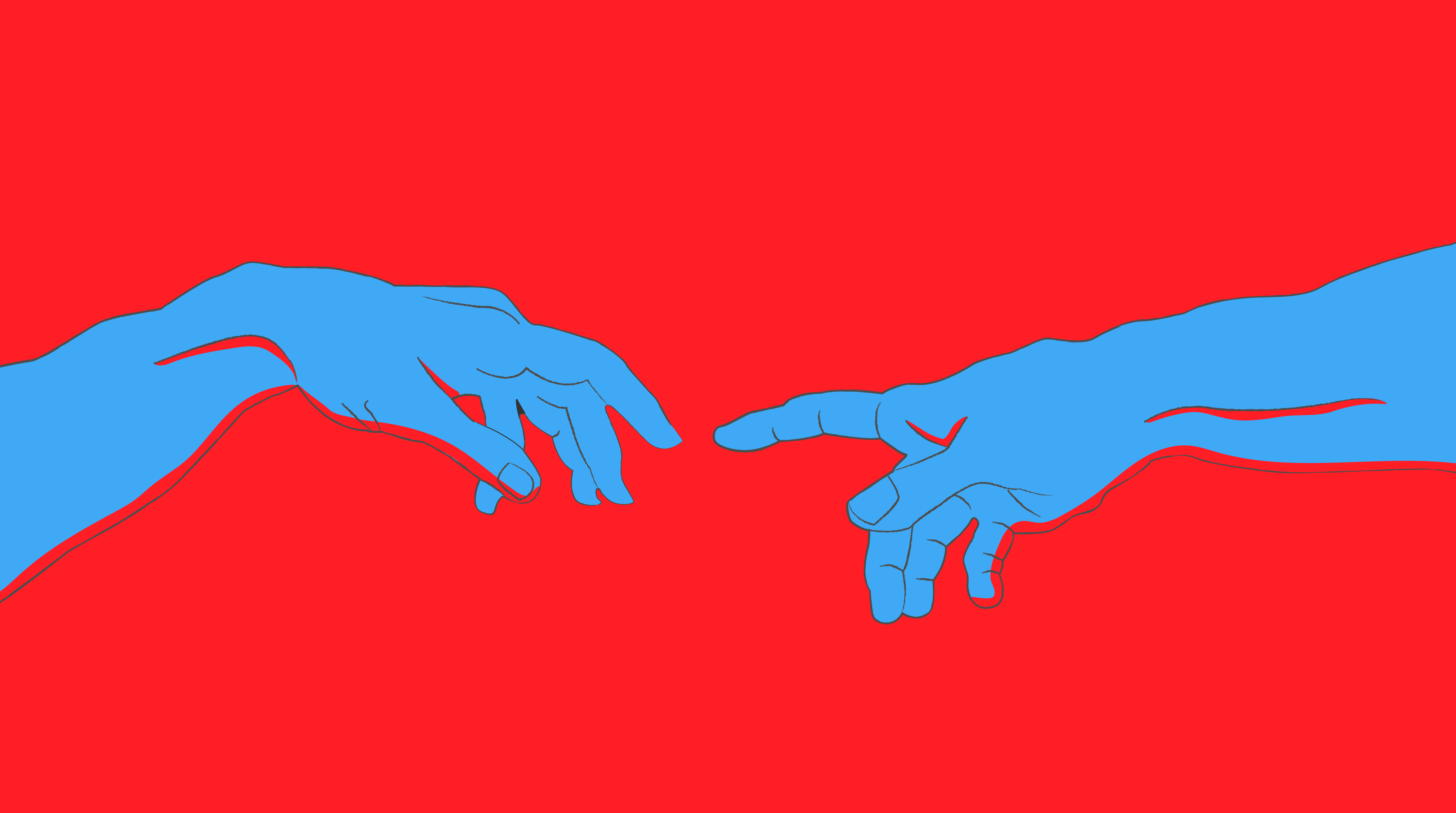 A 2018 survey by the organisation revealed that 64 per cent of at risk groups are aware of where testing for HIV is offered. The Ministry of Health’s Strategic Plan for HIV/AIDS notes that this number drops to 23 per cent among the general population.

Arian says that he would not feel comfortable talking about HIV with anyone other than close friends. “It’s a topic between my friends and I, but at work and at home, where I spend most of my time, this is not the kind of conversation you open up. Generally, people are not open to exploring the possibility that issues like this could affect them.”

According to the ministry’s plan, by 2022, it aims to improve access to user-friendly testing services for all groups at risk. However, the plan notes that “innovative approaches” need to be taken in outreach and awareness raising given the “limited capacity of the program to expand its service coverage.”

Safet Blakaj is the director of Labyrinth, one of the few NGOs in Kosovo that offers user-friendly, secure and anonymous testing services in Prishtina, Prizren and Gjilan. While Labyrinth works primarily with injecting drug users, he says that the organisation would offer services to anyone, as he is aware that public health institutions do not advertise such services in an environment safe for at risk groups.

In addition to Labyrinth, the Centre for Social Group Development and the Kosovo Population Foundation both offer targeted testing and counselling services to at risk groups, but according to Blakaj, few people are aware that such services are available.

“Places that test are hard to find, they are not advertised and no one knows where to go, that’s why we would never turn someone away,” says Blakaj. “While there are some NGOs that offer testing for specific groups at risk, barely any public institutions even offer this service.”

While the development of eight centers for HIV testing in public institutions was envisaged by the Ministry of Health’s previous strategic plan to be completed by 2015, only one was ever opened, at Kosovo’s National Institute for Public Health.

Arian has never been tested, and he believes he is among many like himself that do not trust health institutions in Kosovo, and would not know where to be tested. He also worries about patient confidentiality.

“Living in a small city, there is a high risk that [health professionals] would not keep this information to themselves,” he says. “This is personal information I am not ready to share, not just with a doctor here but also with people I’m close to.” 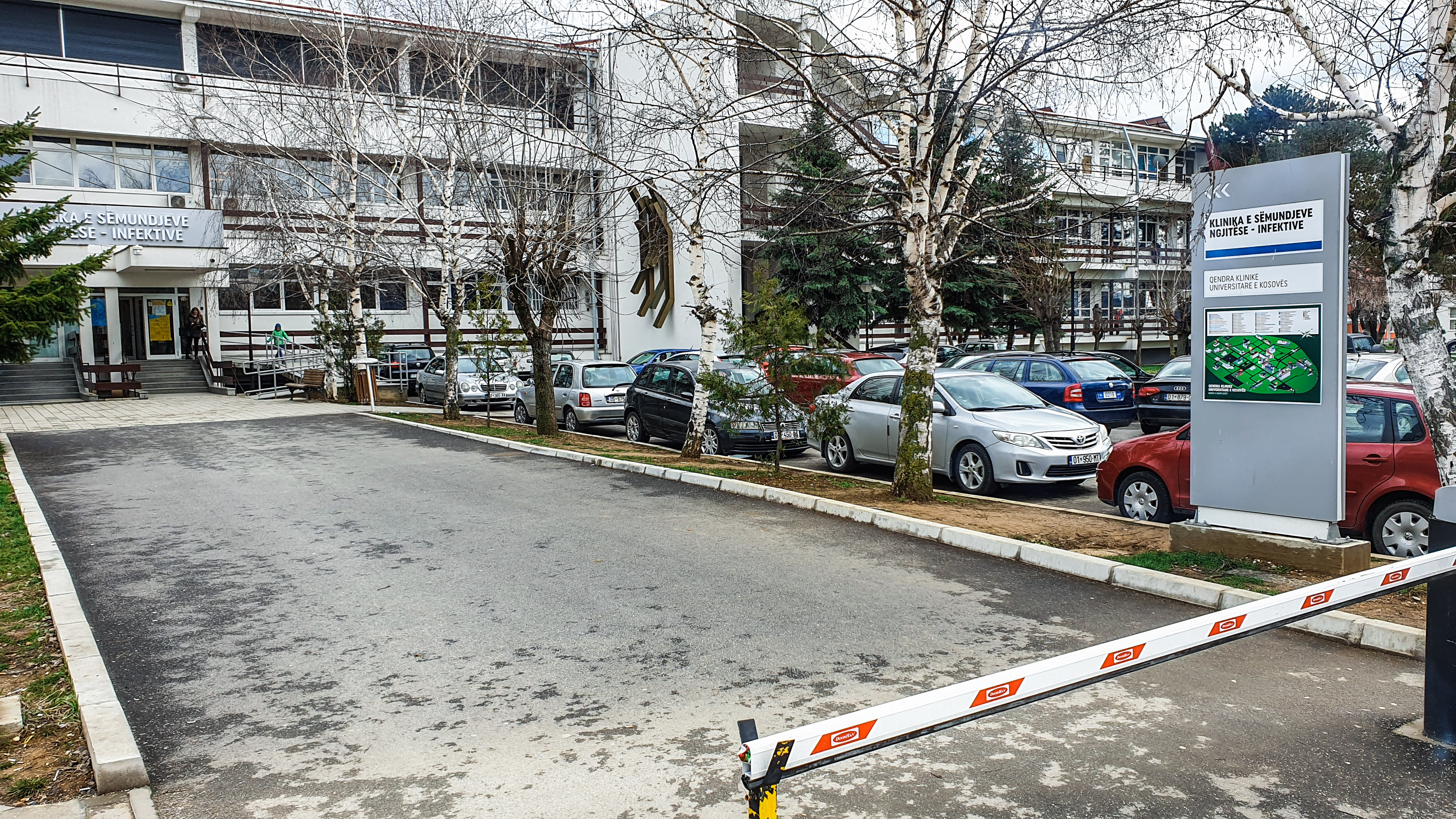 Arian’s misgivings are confirmed by Integra’s survey released in February. Around a quarter of all surveyed responded that they would be happy to disclose someone’s HIV status with friends, family and co-workers without that person’s consent.

Edona Deva believes that fear among groups at risk of being associated with the disease is putting people in greater danger of contracting HIV. “It is really very tragic to find out that health workers cannot protect [patient] data and don’t know how to do it,” she says. “Evidence from this study needs to be used to finance targeted programs that would contribute to reducing barriers to access to services such as these.”

But targeted outreach programs to encourage HIV testing and raise awareness are difficult at present, with data on at risk groups incredibly fragmented, while reaching its intended audience, particularly men who have sex with men, is getting harder.

Arian says that if his anonymity could be secured, and he could find safe places that he trusted to do so, he wouldn’t hesitate to go and get tested. “The burden shouldn’t be falling on me here, though, they are the ones who swore an oath to protect people. I still don’t trust them.”