During BIRN’s televised debate on ‘Jeta ne Kosove’ on Thursday, health professionals responded to criticism over the failure to ensure the availability of basic provisions such as soap and clean bathrooms in healthcare facilities, as concerns over the spread of coronavirus grow.

An investigation by BIRN published on Thursday has revealed a lack of soap and clean bathrooms in public health institutions across Kosovo, as well as in faculties of the University of Prishtina.

As part of the investigation, filming took place at key hospitals where patients are referred to if they are suspected of coronavirus: the University Clinical Center of Kosovo, part of the Kosovo health system, and the North Mitrovica hospital, which operates as part of the Serbian health system. Both have one thing in common: they lack soap and toilet paper in the bathrooms.

BIRN also sent cameras to health centers in Peja, Gjakova, Gjilan, Gracanica, Prizren, Ferizaj and Mitrovica, discovering that all the bathrooms were missing either soap or toilet paper. The situation was the same in the bathrooms of three faculties at the University of Prishtina, the most attended public university in Kosovo.

In a debate on BIRN’s televised programme ‘Jeta ne Kosove,’ public health officials responded to claims that such basic problems could signal that Kosovo’s health sector is ill-equipped to provide patients with adequate healthcare, especially if the country experiences an outbreak of the coronavirus.

“Our staff are trained and we have contingency plans in place in the event of an outbreak,” said Naim Bardiqi, the secretary for the Ministry of Health.

Bardiqi acknowledged that there are currently some problems in terms of supply of provisions in Kosovo hospitals, as the government’s budget is yet to be approved by the Kosovo Assembly. “The Health Inspectorate is on the ground monitoring health institutions to identify whether there are any [healthcode] violations,” Bardiqi said. “We are restricted in the purchases that we can make because the budget [for 2020] has not been yet approved”.

Valbon Krasniqi is a doctor at the Infectious Disease Clinic, IDC, at the University Clinical Center of Kosovo, UCCK, where people suspected of contracting coronavirus are examined. He denies that there are problems related to hygiene and a lack of soap at his clinic.

“The level of hygiene is very high at the Infectious Disease Clinic,” Krasniqi said. “We have sanitary areas where you have soap and detergent. There may be days where we lack it, but all personnel coming in and out can always disinfect their hands. We have uniforms, masks, glasses and other protective wear that our staff have been wearing for two or three weeks.”

Krasniqi also addressed concerns over whether his Clinic is prepared to handle an outbreak following the increase in people coming in and out of the IDC for testing. He stated that the virus is caused by human to human transmission, typically through coughing, sneezing and entering the respiratory system.

As such, groups of people that are immunocompromised are at the highest risk of developing the disease COVID-19 if they come into contact with someone that has contracted coronavirus.

“We have designated a special room for people that are suspected of having contracted coronavirus,” Krasniqi said. “In all cases where a person has a high fever, coughing and other symptoms of the flu and have come from places where cases of the coronavirus have been confirmed, they are isolated in these special rooms and samples are taken.”

Asked what protocol is currently in place should there be a confirmed case in Kosovo, Krasniqi emphasized that a clear plan is in place.

“If anyone tests positive, their treatment will continue in the clinic, and we will issue requests to test anyone that has come into contact with this person. For the moment, we only have one ward on standby with a total capacity of 130 beds,” he said, adding that should this number of cases be exceeded, they will not have trouble finding more beds.

During the debate, members of the public decried health institutions across Kosovo for failing to treat patients with dignity and professionalism, forcing some to seek treatment abroad. “My relatives recently had to use healthcare services, and they told me they were not treated like human beings,” says Sali Likovci, a resident living in Mitrovica.

Dejan Djordjevic, another Mitrovica resident, is doubtful that many countries in the region are prepared to respond to an outbreak of coronavirus. “In terms of health services, neither Kosovo, Serbia or Albania are ready to deal with coronavirus,” he said.

Enver Rexha, a man in his seventies, said that he is disappointed that “even for simple things, like constipation, I had to get treatment in Skopje because they told me they can’t figure out how to treat it here.”

Shqipe Gjocaj, a researcher that has investigated the issue of maternal deaths in Kosovo’s hospitals, stated during the debate that any concerns over Kosovo institutions’ response to the coronavirus outbreak should pale in comparison to concerns over the health sector’s general inability to provide patients with basic equipment across the board.

“What I found during my research is that in delivery rooms, nurses have recommended that women bring their own basic provisions with them, their own water and sheets, for example,” she said. “This violates patients’ rights, particularly women patients. It is very typical for even the most basic of provisions, such as a bathroom, to be lacking.”

According to Gjocaj, the culture around doctor-patient relationships in Kosovo needs to change before respect for patients’ rights can improve.

“Doctors enjoy a certain status and reputation in Kosovo, and this culture of superiority needs to be demystified,” she said, adding that there is a lack of accountability in Kosovo when it comes to professional misconduct. “Patients’ rights go hand in hand with human rights, and doctors should all learn to respect the principles of equality and dignity.”

Isme Humolli from the Kosovo office of the WHO responded to an audience question about the  lack of communication and coordination between central and local areas of the Kosovo health system, particularly in Serb-majority areas.

“Our main communication has been with the Ministry and the Institute for Public Health, and this has to be raised to a higher level,” Humolli said, explaining that during the measles outbreak of 2017, communication between central institutions, the WHO and parallel institutions in Serb-majority areas in Kosovo was almost zero.

Srdan Kostic, the deputy director of the healthcare clinic in Strpce which operates under the Serbian health care system, acknowledged that no reporting occurs between his institution and Kosovo’s Ministry of Health.

However, Kostic explained that this lack of coordination should not affect their ability to respond effectively in the event of a positive case at his clinic, despite the fact that the clinic in Strpce is not prepared to treat those who test positive for coronavirus.

“We don’t have the conditions to keep them securely, all we have is a plan, and that plan is for patients to be taken by special medical escort to the Infectious Disease Clinic in Mitrovica,” he explained. “If the patient is Kosovo Albanian, the medical team will take them to Prishtina.”

Bardiqi from the Ministry of Health agreed there is room for improvement. “This is a political issue, we have continuous coordination but it is not the best when it comes to healthcare institutions in Serb majority areas,” he said.

Equality of access to healthcare and information a concern

Audience members participating in the debate raised concerns over the ability of Kosovo’s health sector to respond for Kosovo’s Roma, Ashkali and Egyptian communities in areas such as Plemetin and Gjakova, where residents say they live in cramped conditions that could exacerbate a potential outbreak of coronavirus. 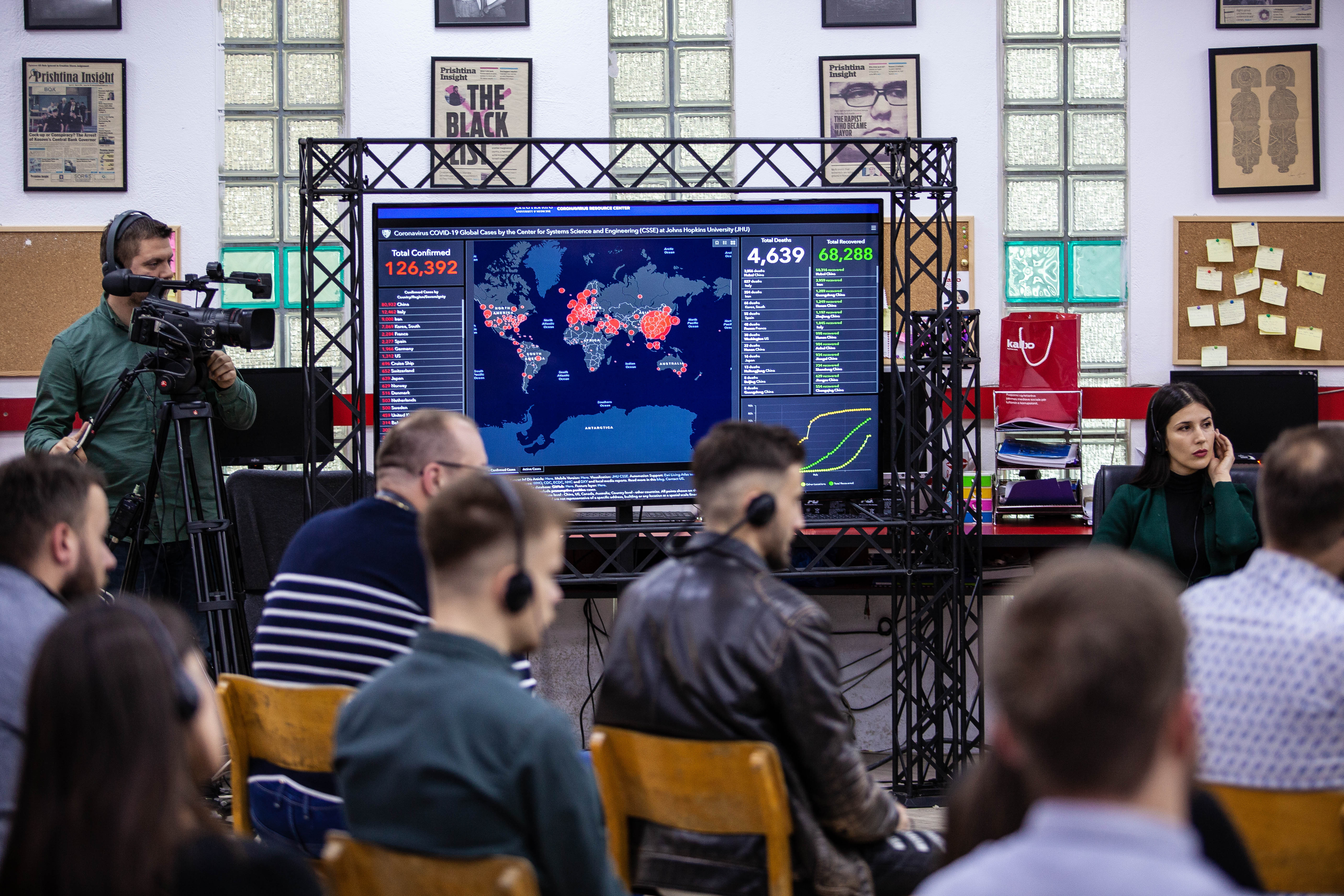 Responding to whether there are plans in place for a response regarding these communities in particular, and whether there are mobile teams that could visit these areas, Bardiqi said that the Ministry has focused on addressing this issue over the last twelve months.

“The Ministry of Health has conducted more than 17,000 home visits across Kosovo in 2019,” Bardiqi said. “Concerning access for these communities, they have equal access to healthcare institutions in Kosovo. We have held meetings with municipalities in this regard and invest around 50,000 euros every year for equipment in these municipalities. However, we have had issues related to the Roma community because their movements make it more difficult to control the problem.”

Humolli from the WHO emphasized that all materials disseminated by the organisation have been made available in all languages. “The WHO has translated all of its materials related to the coronavirus into the Roma language, and it has been disseminated to all of Kosovo’s healthcare institutions.”

Over thirty members of the public from the Albanian, Serbian, Bosniak and Roma communities participated in this debate, posing their comments and questions via video or while present at the public forum. This series of debates has been supported and funded by UNMIK.