Can galvanising moments sway discrimination against minorities? Research assumes that ethnic or racial boundaries may take generations of cohabitation to adapt. But we found that one single gesture by Swiss football players with Kosovo-Albanian heritage was powerful enough to alter discrimination in Switzerland.

It’s the 90th minute in the 2018 World Cup, and it’s a draw between Switzerland and Serbia when Xherdan Shaqiri scores for Switzerland. Emotions run high, and Shaqiri celebrates his goal with a double-eagle gesture, just like Granit Xhaka did earlier in the game. The team captain, Stephan Lichtsteiner, joins in, making the same gesture. It’s a heated atmosphere in the Kaliningrad Stadium, but should there be any wider consequences for the society? 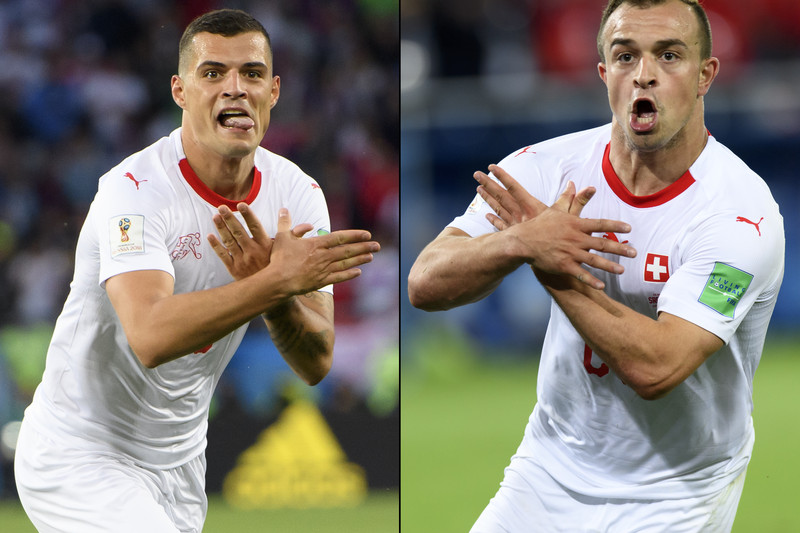 A combo of two pictures shows the celebration for the first goal of Switzerland’s midfielder Granit Xhaka, (L), and the victory goal of Switzerland’s midfielder Xherdan Shaqiri, (R), both making the eagle emblem of the Kosovo during the FIFA World Cup 2018 group E preliminary round soccer match between Switzerland and Serbia at the Arena Baltika Stadium, in Kaliningrad, Russia, Friday, June 22, 2018. Photo by: EPA-EFE/LAURENT GILLIERON

Goals and controversies in sports may often soon be forgotten, but under certain circumstances seemingly trivial things like a controversial gesture in football can have a real impact. We happened to be studying ethnic discrimination in the Swiss housing market at the time of the World Cup, using a field experiment to describe the unfortunate fact of discrimination: people with minority names are less often invited to view an apartment. Right after the game and the double-headed eagle gesture, we observed a drastic drop in discrimination against people with a Kosovo-Albanian name.

The double-headed eagle gesture is a symbol used in the Albanian-speaking community to express national and patriotic feelings. While the players referred to emotions in the heat of the moment, and later publicly apologised, there is a historical component to the events of that evening. Several of the Swiss players have Kosovar origins. Xherdan Shaqiri moved to Switzerland at a very young age and grew up in Switzerland. Granit Xhaka was born in Switzerland to Kosovo-Albanian parents. Given the conflictual history between Serbia and Kosovo – to say the least – the football governing body FIFA considered the game “high risk” in the build-up and extra security was put in place. There was fear that animosities between supporters and fans could lead to violence.

In this context, the few seconds during the goal celebration, when the double-headed eagle gesture was shown, were not missed. The Swiss TV commentary dismissed it as inappropriate, and Serbian fans reacted angrily. Right after the game, the Football Association of Serbia lodged an official complaint, and FIFA launched investigations. At the same time, the gesture kicked off a public debate like few other events. Social media and newspapers were full of comments, opinions and discussions. What united these contributions to the debate was an attempt to make sense of this seeming contradiction: on the one hand, there is a nationalist symbol for Albania, on the other hand, the players represent Switzerland and the national football team is an important marker of national identity.

In these particular circumstances, the debate remained mostly positive. Indeed, there was much soul-searching, and attempts to understand and accept tensions and double loyalties. Shaqiri’s football boots are emblematic of these double loyalties: On the left boot, his stronger foot, Shaqiri had the Swiss flag embroidered; and on the right boot, he had the flag of Kosovo embroidered to indicate his Kosovo-Albanian heritage. At the same time, there was the threat that FIFA would sanction key players of the national squad. They could have been banned for two games (in the end, they got off lightly, with fines). Such a threat from the outside can unite people, something called the “rally-around-the-flag” effect.

The effect of all this was, that excluding Kosovo-Albanians did not make sense, and we think that this led to a drastic drop in discrimination in the housing market. Like in many other domains, minorities in Switzerland – and elsewhere – face discrimination when searching for an apartment. Such disadvantages are often not immediately visible for the victims, who, in our case, receive fewer invitations to view an apartment. Who hasn’t yet received a negative response? But when investigated in a controlled setting, it turns out that cues about one’s origin (a name, a picture, an accent) are often behind a rejection, things that have more to do with stereotypes and racism rather than plausible criteria like creditworthiness or reliability.

Critics might point to the World Cup as a context where the population may be generally happier and more generous than usual – certainly when the national team advances to the knockout stage of the tournament. Could a generally positive mindset make people more open when it comes to inviting people to view apartments?

We don’t think this is a likely explanation. First, attention in the media and on social media was very much on the three players showing the controversial gesture, especially Xherdan Shaqiri. For the other players, we see smaller increases in attention on match days, but the attention Shaqiri and the double-headed eagle gesture got was on a completely different scale. Second, we find that discrimination against people with Kosovo-Albanian names remained virtually absent for at least three months after the game – well beyond what we would expect from a World Cup effect. Third, the drop in discrimination was notably for people with Kosovo-Albanian names; we did not see equivalent changes for people with Turkish names.

Seemingly small things like a controversial gesture can have a major influence on society when the circumstances are right. Here we have shown this for the case of a controversial gesture used to celebrate goals in a football match. For us as researchers, this influence probably means paying more attention to role models, celebrities and public figures who reach people across society. People are much more receptive to them than, say, politicians, who tend to reach people with similar views and ideology. For celebrities, this influence means that they should be aware of their impact on society as a whole – for better or worse.

Advertising has done this for ages when celebrities are asked to endorse coffee beans or watches. For society, this influence probably means that we can be hopeful that changes toward more inclusive societies are possible without having to wait for generations. This change, however, depends on the balance of positive and negative voices out there. If much communication today happens in closed groups like Telegram channels or specialist media, celebrities can often reach across these communities and thus play an important role in social change.

Daniel Auer (Dr, Lausanne) is a senior researcher at the University of Bern, Switzerland and fellow at the University of Mannheim’s Center for European Social Research, German. Prior to this he studied Political Science and Economics in Vienna, Urbana-Champaign, and Zurich before receiving his Ph.D. from the University of Lausanne. In his research, Daniel Auer analyzes how attitudes, local norms, and policies affect inequality between social groups and investigates how inequality affects conflict and migration.

Didier Ruedin (DPhil, Oxford) is a senior lecturer at the University of Neuchâtel, Switzerland, and affiliated research fellow at the African Centre for Migration & Society at the University of the Witwatersrand. A project leader in the centre of excellence NCCR on the move, he uses experiments and quantitative analysis to examine discrimination and political reactions in policies and political debates.

by Valon Fana
Next: News