Hunting for edible pizza in Prishtina

A ubiquitous food on most restaurant menus in the capital, proper Italian pizza is nevertheless difficult to find. Our correspondent tests his luck.

While Kosovo is a gold mine of genuine Balkan delicacies such as dollma (stuffed vegetables), pite  (a pie with vegetable fillings) and the ever so sought-after wintery treat of ajvar (a type of pepper relish), there is still much work to be done to adequately represent foods from other cultures. While many still see fast food as a haphazard assembly of cheap groceries to sate a hung-over tummy, meals like hamburgers, doner kebab and especially pizza can bring about moments of cheerfulness if prepared well. As takeaway food grows more utilitarian, one can only hope to come across a pizza worth thinking of twice about.

Considering that almost every restaurant in Prishtina offers their own variety of pizza (many of them only because of its customary nature), the hunting ground is vast, yet finding the best of the bunch turned out to be a lengthy and greasy session of trial and error. 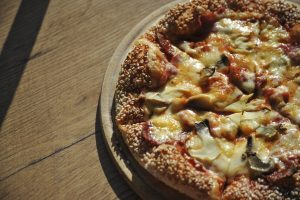 If you enjoy one particular dish more than others, it is smart to set a standard in order to easier accept disappointment and curb unnecessary experimentation. For many locals, including myself, Proper Pizza has for a long time offered the run-of-the-mill pizza that just does the job. I visited their restaurant on Kosta Novakoviq street across from Hotel Prishtina to once again convince myself of their acceptable quality.

The interior was pleasant with mirrors and unshowy decor covering the walls. It was notably clean, had soft music playing on the TV that blended well with the added background noise of afternoon chit-chat. A friendly staff member promptly arrived and took my order within seconds.

Although I was tempted to design my own pizza through the ‘Pizza juaj (Your Pizza)’ option, I went for the signature alternative which was unsurprisingly named ‘Proper Pizza.’ I got exactly what I expected: scalding hot sauce, cheese, average beef prosciutto, pieces of smoked beef and brined champignon mushrooms on a circular piece of dough. The crust was just crispy and bubbly enough despite its thinness. I was also surprised by how chewy it was considering thinness. It did have slightly excess sauce and the cheese had, to some extent, engulfed the toppings, but I was generally pleased with it (they were courteous enough to bring extra olives and hot peppers). At 4.50 euros for the medium size, the price matches the quality. They also deliver around the city, but discretely state on their menu cards “sorry we cannot deliver your pizza as an attachment.”

Below par at Hallall Pizza

Even though I am not very picky when it comes to food (especially pizza, one should not complain when they are confronted with a pizza), it is sometimes difficult to avoid criticism when you find yourself on a pizza discovery journey. I received a suggestion to pay a visit to Hallall Pizza, but despite the fact that it seemed to be well-known, I was not familiar with it prior. They have two restaurants, one on Bajram Kelmendi and the other in Ulpiana. To preface, it did not really fit well with my taste.

Although this may be true, I have to say that the staff did their best to be attentive and served with a smile. The shop on Bajram Kelmendi street looked nice from the inside, and although narrow, the walls were covered in nice-looking wooden planks.

Again, I went for the pizza with the same name as the restaurant, hoping that it would be the better of the bunch. All of the ingredients were ordinary and store-bought, nothing special. The crust was quite brittle and some parts reminded me of a potato chip. The cheese was not very well spread out, and I assume that was because of the large number of pizzas they had bake simultaneously. Despite this, I would understand how some might find it good. For people like myself, there is always ketchup and mayonnaise, the Balkan way to enhance an average fast food pizza.

I decided to get out of my comfort zone in order to give them a second chance. I strenuously uttered the words “can I have a small pineapple pizza?” while being aware of consequences that it might have. Looking back, it was not one of my better choices, but I was presuming that they would surprise me. It was practically the same, it just had a few pieces of pineapple scattered across it.

They offer free delivery and during last year’s month of Ramadan they were open from Iftar (sunset meal) to Suhur (early morning meal). At 3.00 euros for the 20 centimeter size, I would actually eat there again if I were very hungry and close by.

Not cheesy at all at Sach Pizza

Throughout my days in Prishtina, I have known Sach Pizza exclusively for their sandwiches, although they are branded as a pizzeria. Their name comes from saç, a traditional cooking utensil – a dome-shaped piece of sheet metal, which covered in embers is placed on top of a baking pan. Yet, you could never make pizza with a saç (they use a wood oven instead) because the saç is very cumbersome and more of and used only for delicacies such as flija.

Their restaurant is situated on Luan Haradinaj, opposite of the main police station, and offers a very lovely ambiance and pretty decor. The service is quite nice and the staff are quick to respond to any request. The interior was rather spacious and echoed tunes of smooth jazz. Without thinking twice, I went for the quatro fromaggio, because the only thing finer than cheese itself is four distinct types of cheese mixed together. You would usually expect major dripping from a pizza completely covered in melted cheese, but it had just the perfect proportion of ooze and firmness to be optimally enjoyable. Also, the crust was chewy and surprisingly not soggy considering the heavy topping. The buttery gorgonzola, delicious mozzarella, salty feta and cream cheese were really tasty together yet not overwhelming.

Certainly better than the previous ones I tested, Sach’s medium pizza at 5 euros is completely worth the price and the time spent in their restaurant. Their other restaurants are located at the Albi Outlet in Fushe Kosove and Albi Mall at Veternik, and they also deliver within Prishtina.

One question you might have at this point is: “how is this fellow able to eat so much pizza?” The brief answer is, I do not know. But, I am aware of my capability and I will use it for the greater good. Incidentally, this faculty paid off very well on my final trial.

I made my way for Napoli Vero, a restaurant famous for their mastery in the craft of Italian cuisine. At their doorstep opposite of the Palace of Youth rests a Fiat 600 painted in a motive resembling the Tricolore and inscribed with the name of the restaurant. 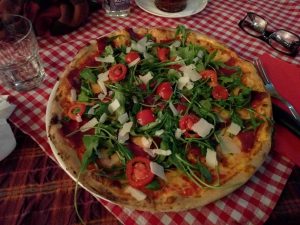 The ambient had this particular warmness to it; it felt as though I was entering my own home. The hardworking staff were pacing around to deliver orders but I was soon greeted by an amicable server who promptly offered to take my order. As Luciano Pavarotti played in the background, I asked for a rucola pizza, wanting to conclude my journey with something lighter. It did take a little bit more to arrive, but I had the privilege to take a look while the pizza broiled and crusted inside the oven.

The wait was worth it, it looked mouthwatering. Covered in fresh rucola leaves, blood-red cherry tomatoes, aged prosciutto and thinly sliced mozzarella, my stomach turned a blind eye and relished together with me. The crust was probably the most delicious I had ever tried: it had just enough salt and had the perfect thickness. The prices range from 3.50 and 6 euros, slightly more expensive than most, but you are assured to have an enjoyable meal. It was certainly the best so far.

Corrections February 16, 2017: a previous version of this article mistakenly referred to Fiat 600 as a Volkswagen Beetle.

by Lura Limani
Next: Big Deal