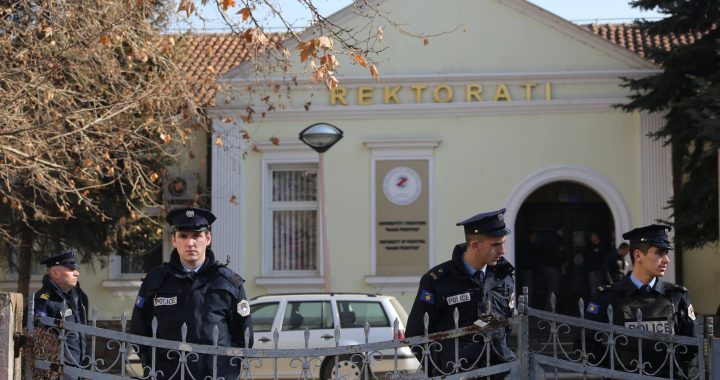 The University of Prishtina edged closer to half a century of existence on Wednesday with a strange turn of events: disruptive student protests and an alleged threat from ISIS.

Just as the ceremony began in the rectorate building, members of the student organization Study, Critique, Action, SKV, in an attempt to filibuster the rector’s speech, yelled “You have ruined UP,” and “We’re the students, you’re the government.”

The student organization is demanding the de-politicization of the university, which for years has been marred by scandals of plagiarism and political appointments. In 2014, student protests ousted then-rector Ibrahim Gashi, after Koha Ditore revealed that he had published in a fraudulent journal.

Security forced the students out of the room and then Rector Marjan Dema, seemingly unruffled, gave his speech. Ten students were arrested by the Kosovo Police, which also discharged pepper spray outside the rectorate to deter protesters.

“This anniversary is the moment when we value the importance, merits, the contribution and values of the University of Prishtina for Kosovo’s society,” said Dema, alluding to the important role the public university played in developing a civil resistance in Kosovo’s recent history.

“I bow to the sacrifices of all those students and professors,” he added.

The University of Prishtina, established in 1970 after years of protests by Kosovo Albanians, was the first Albanian-language institution to provide higher education in Kosovo. Since the days of agitation for its establishment, it has played a major role in social movements, and became the backbone of Kosovo’s civil resistance to the 1990s Milosevic regime.

The ceremony was originally planned to be held in a different room, but the location was changed after the rectorate received a handwritten note claiming that ISIS would attack, local media Koha Ditore reported.

After the ceremony, pro-rector Afrim Hoti said that the note contained the ISIS logo and a warning: “We will attack on the 15th, see you at God’s.”

The Kosovo Police is currently investigating the note.

The rectorate received another alarming note before festivities began. The non-governmental Organization for Increasing Quality in Education, ORCA, published a worrying report about the academic integrity of the managing staff, claiming that a high percentage published in fraudulent journals.

Almost 40 per cent the teaching staff have published scientific papers in dubious journals, claimed the report.  If those publications would be disregarded from their professional resumes, 49 per cent of the managerial staff would not be able to justify the academic titles they hold.

The list includes the current rector Marjan Dema, who in 2011 published an article in a dubious journal, suspected to be predatory and fraudulent.

“It is ridiculous that the prorector revealed the ISIS threat only after we published the report and the students protested in front of the rectorate,” said ORCA founder Rron Gjinovci.

“The real threat to the University of Prishtina is the managing body of the institution.”