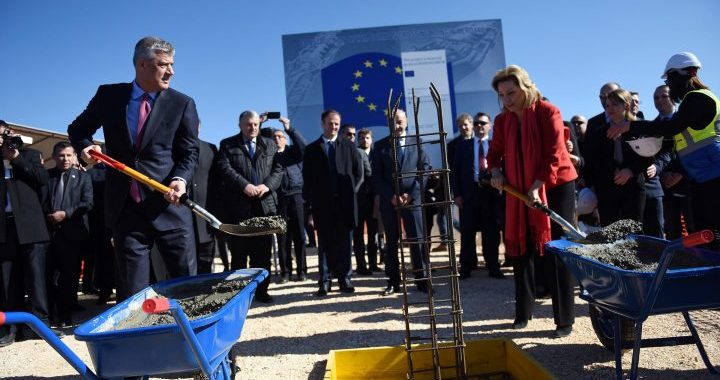 Kosovo President Thaci and Head of the EU Office in Kosovo Apostolova at Merdare. | Photo: BIRN.

Work on the first permanent crossing point between Kosovo and Serbia began today in Merdare, marking a milestone for the Brussels-led dialogue.

Kosovo and EU officials broke ground on Thursday in Merdare to mark the beginning of works in the first of six permanent crossing points in line with the IBM agreement. The agreement, signed in Brussels in 2011, stipulates only IBM; Serbia sees this as Integrated Boundary Line Management while Kosovo sees it as an Integrated Border Management.

European Union representatives, diplomats, Kosovo state officials, and customs managers were present at the ceremony as the foundation stone was laid.

Kosovo officials remarked that the the construction of the crossing point in Merdare is a direct result of the EU-mediated dialogue with Serbia.

Minister for Dialogue and chief negotiator Edita Tahiri called the beginning of works “a gift for the ninth anniversary of Kosovo’s independence,” to be celebrated the following day, February 17.

During the ceremony on Thursday, the head of the European Union office in Kosovo Nataliya Apostolova reminded state officials that the construction of this crossing point in itself was not a guarantee for investments without a genuine fight against corruption.

President Hashim Thaci said that the construction was proof that the dialogue with Serbia must be continued, and that Kosovo and Serbia will fully normalize their relations in the near future.

“This way we’re not only fulfilling European standards, but we’re decreasing the informal economy. Through dialogue and cooperation, we will increasingly empower our statehood,” Thaci said.

“This is a direct result of the dialogue. It’s just further proof that we need to continue to solve the problems with our neighbors through dialogue,” Mustafa said.

The European Union office in Kosovo will spend 9.4 million euro in the construction of the permanent crossing points.

“We are aware that the construction of this point does not guarantee that all demands have been met. The government needs to guarantee more results and show political will in the fight against organized crime and corruption, a key component when it comes to foreign investments,” Apostolova said.

Tahiri explained that since 2011 Kosovo and Serbian state authorities have increased control and improved the freedom of movement of citizens and goods. Construction in two other crossing points in Bernjak and Mutivoda will also begin soon, she claimed.