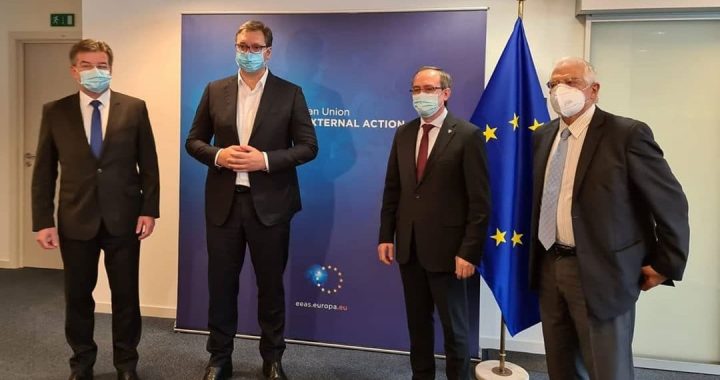 With the Kosovo-Serbia dialogue currently at a standstill, a new report by the International Crisis Group, ICG, proposes three possible options for ending a logjam that is holding both sides back from EU membership.

All parties involved in the stalemated Kosovo-Serbia dialogue should seek an agreement on mutual recognition and the two countries should acknowledge the need for compromise, a new report by the International Crisis Group, ICG, think tank says.

The report, released on Monday, warns that as long as the two sides cannot find an agreement to resolve their long dispute, “both parties will be barred from the EU, and Kosovo from the UN and NATO as well”.

The report proposes three options on how to deal with the Kosovo-Serbia stalemate.

In the first, ICG suggests a combination of pressure, including billions in development assistance and investment for Serbia coupled with an assurance of rapid EU membership, could move Serbia toward recognising its former province without extracting significant concessions from Prishtina.

Since Kosovo declared independence unilaterally in February 2008, Serbia has bitterly opposed it, and has invested great efforts in convincing countries to rescind recognition, while campaigning vigorously against Kosovo’s membership of international organisations.

Serbian President Aleksandar Vucic “has said an arrangement that involves a form of de facto recognition would be ‘much easier for Serbia’ than de jure recognition,” the ICG notes, referencing the 1972 German Basic Treaty, under which former East and West Germany established diplomatic ties without formally recognising each other.

As a second compromise, the ICG suggests an option that would address minorities’ grievances “by granting them self-government in autonomous territories”.

While recalling that Kosovo leaders already agreed to grant the Serbian minority democratically elected institutions during the failed 1999 Rambouillet talks, the ICG recommends enhanced autonomy both for Serbs in Kosovo and ethnic Albanians living in southern Serbia. “It could still work if Belgrade and Prishtina embrace it,” the report maintains.

In its third option, the ICG revives the idea of border modifications between two countries, which since it was first floated in 2018 has alarmed many in Prishtina, Belgrade and the international community.

“Despite strong opposition from within the EU, proponents have for years argued that a territorial exchange could be the key to unlocking the Kosovo-Serbia dispute,” the report says.

“Serbia privately floated a similar idea in 2010, and as noted [then Kosovo president [Hashim]Thaci and Vucic revisited it in 2018,” it added.

Either way, the ICG says that leaders of both sides “need to be clearer with their constituents” as the search for a final agreement has long been “hampered by pervasive misinformation for which Belgrade and Prishtina are largely to blame”.

The EU-supported dialogue with Serbia has often caused crises and controversies within Kosovo, while the ICG says that currently in Kosovo neither the governing coalition nor the opposition is ready to engage in a meaningful dialogue and suggests preliminary internal negotiations within the Pristina elite.

“Through these negotiations, the governing coalition will need to settle on a common platform that sets out its goals, red lines and potential concessions,” the report advises.