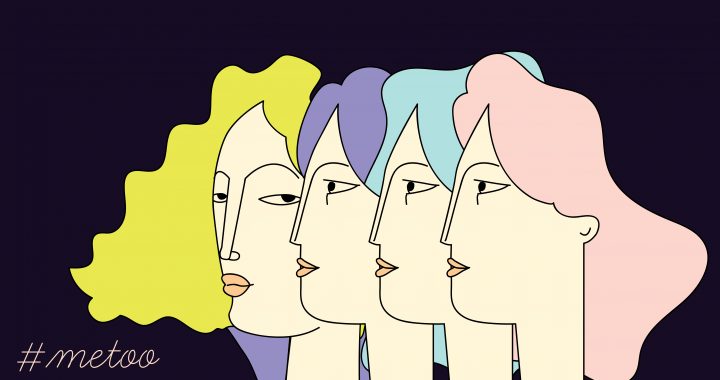 Our greatest task as feminists is for men to unlearn the entitlement they feel towards women's bodies, and for women to internalize courage.

I remember struggling with sexual harassment ever since I started school. It was in the early ‘90s, after we had returned from Norway, where, together with my family, I had stayed as an asylum seeker for almost two years.

The school near my home town in Peja, called “Boris Vukmirovic,” was occupied by Serbs, so we had to enroll into a school farther away, called at the time “Miladin Popovic.” The school was old and the classrooms were crowded. Toilets were a scary, dirty place and most of us were strongly advised by our mothers not to use them, or if we must, to always go there with a girl-friend.

Since those first school years, vulgar talk, swearing and harassment were very common. Boys as young as seven used sexually explicit words and expressions as an ordinary way of communication. Even though some boys were known for being nastier than others, all of us, boys and girls, were taught that boys will be boys.

One time, I must have been in third grade or so, I was heading home after school together with a group of girls. I was holding my little brother’s hand. He was in the first grade at the same school. All of a sudden, I felt my brother’s hand let go of mine as I collapsed on my knees on the ground. One of the boys from my class had jumped on me from behind. I turned and saw him and his friends laughing. I rearranged my bag, and started walking a little faster, when the same thing happened again, now by another boy who said “why shouldn’t I do it too?!”

I got up again, and continued walking even faster, pulling my brother’s hand harder. I felt utterly disturbed, on the verge of tears, angry, and confused. I couldn’t understand what had happened. Even though most would say that the attack was more physical than sexual in nature, it didn’t feel like it.

Even though I wasn’t afraid of the boys in my class and I wouldn’t hesitate to holler back at them, I always felt intimidated when it came to my body. It was because of the unquestioned freedom the boys felt towards girls’ bodies. It was something that made me feel powerless.

Even though it was a behavior frowned upon by parents and teachers, it was somehow considered unavoidable. So it was up to us, girls, not to provoke it.

Fear of rape was the reason why I quit my athletic training. The ‘great park,’ as it was known in Peja, was a very unsafe place to be (like other parks). You heard countless stories of sexual assaults, which always happened to ‘those’ girls and women, i.e. those who dared to go there with men and especially in the late afternoon or at night.

Therefore, I had to give up all things physical that I really loved. And eventually I ended up being satisfied with doing body exercises in one of the rooms in my house with tapes I recorded on TV.

High school was even worse. And not just because of the transition into adolescence, which is difficult for most children, but also because of the political circumstances. Right after the war, in the early 2000s Peja was characterized by political murders as well as violent beatings, stabbings, and killing among ordinary men and boys. They were frequent and happened in the school yards, in cafes, in Korzo (the city center), and pretty much everywhere. So, who cared about the safety of girls and women in such circumstances?

I spent my teenage years in fear. There have been numerous times that I’ve been followed by a man after school. Sometimes they would approach and whisper stupid things, sometimes they would ask you to stop so they can say something to you, or they would just follow you until you arrived home. You never knew how to react. Ignoring them completely would not always work. And yelling at them to leave you alone was sometimes worse. There were cases when I wouldn’t even dare to enter the apartment building we were living temporarily without turning my head several times to see if someone was behind me.

Phone harassment was another frequent form that most girls my age dealt with. I remember a phone call by a young man that left me feeling confused and scared. I answered and the moment I realized it was one of these common ‘boy jokes,’ I hung up.“You dirty whore! How dare you hang up on me!” he yelled at me, calling from another number. I had no idea who he was, and for days I was scared of going out just in case he approached or attacked me in one way or another.

Similar and worse experiences with sexual harassment continue today.  In 2014, the family of a 12-year-old girl in a village called Manastirc in Ferizaj protested in front of the school against the teacher who tried to rape the girl. The teacher, in his ‘60s, was declared innocent a year after. Just a year ago the police arrested another teacher in one of the primary schools in Skenderaj for sexually harassing two of his students.

Not trusting girls is the first tendency. “When he touched you, did you like it?” a social worker asked a girl at a police station in Prishtina. Not having shared it with anyone, the girl had written about being abused by her teacher in her diary. When the parents read it, they asked for help from the Ombudsperson. The case is not public yet, but it is being investigated.

Just like in schools, sexual harassment in Kosovo is institutionalized. University students struggle, as do women in working places. I recently conducted some research in two prisons in Kosovo, and had to conduct several interviews in different public institutions as well. I felt safer while talking to the prisoners, and way more harassed by the officials and guardians who were present while I was checking official files. The way they talk and approach you, the jokes and staring, all create an environment where you feel utterly uncomfortable and unsafe.

While Kosovo’s Criminal Code condemns sexual harassment, it doesn’t provide a clear definition of sexual harassment but ‘harassment’ in general. And the procedures of reporting it are unclear as well. Even worse, as a member of the Kosovo Police told me, restraining orders are only addressed under the Law On Protection Against Domestic Violence, leaving single women or women who were not in a relationship with their abuser without a clear legal pathway to take out a restraining order. So if a woman wants to get a restraining order against her ex-boyfriend, or a stranger, she cannot.

Such flawed laws and regulation, poor rule of law, combined with violent masculinity, are considerately contributing to the reinforcement of ‘rape culture.’ A culture where men’s sexual urges are justified, and if harassment of any kind happens, it is our responsibility as girls and women to avoid it, be it through ‘the proper’ attitude or dress code.

It is rare for women to come forward and seek institutional punishment for the perpetrators because professional and institutional spaces do not make them feel safe and protected. Criminal conduct regarding attacks against girls’ and women’s bodily integrity, forcing women to sometimes give up opportunities and even their jobs, goes underreported and reduced to private conversations between women.

Male sexual entitlement or the belief that men are owed sex and sexual advances just because they are men is a worldwide issue. But it is far worse in poor and isolated countries like Kosovo where harassment, or as interpreted in Albanian as ‘teasing,’ is among the least important issues the institutions feel like they have to deal with.

Unlearning male sexual entitlement and challenging male authority remains our biggest challenge as feminists. The fight is tough and our attitudes should be just as fierce.

While sharing stories and giving each other voice is priceless, I agree with so many feminists around the world that suggest we start publicly shaming the men who harass us. We try to make society empathetic by saying that all these women, victims of sexual harassment, are our daughters, sisters, mothers and wives. With the him, though campaign for instance, we would be talking about our sons, brothers, fathers and husbands as the harassers and perpetrators.

By keeping them accountable, we can avoid horrible experiences for so many little girls in schools, women at work, and in the public realm. A cup of coffee or a glass of wine with friends at night, and the opportunity to get back home safely alone afterwards, should not be considered luck and luxury but a fundamental right and necessity.

When I look back to myself in school, I wish that collective voices would have told me that it was neither my responsibility to avoid sexual harassment nor should I have had to tolerate and ‘deal with it.’ And I keep imagining what I would have been able to do professionally, and the hobbies I would have been able to cultivate and do today, if I wasn’t forced into internalizing fear and intimidation.