A young Kosovar, who’s serving his sentence for being a member of terrorist organizations, recounts his journey to war torn Syria and back.

F.S. was locked up in prison cells, blindfolded, interrogated under constant death threats, and subjected to psychological and physical torture at the hands of terrifying enforcers of the so-called Islamic State of Iraq and Levant.

Now F.S. is safely home in Kosovo, where he has been convicted of participating in a terrorist organization and become a witness against other former ISIS recruits and recruiters.

He defected to Syria in February 2015 with a group of Kosovars when he was still a minor. Disillusioned and battered, he returned in May of the same year, only to face incarceration in his home country despite his insistence that he had gone to the warzone to help Syrian people and was an ISIS prisoner, and not as a fighter.

Kosovo is thought to have a high per capita representation of fighters in ISIS, with an estimated 300 citizens having gone to participate in the war in Syria. According to the Kosovo Center for Security Studies, some 130 are estimated to have returned home and 60 are believed dead. Currently, more than 50 Kosovars face jail time for participating in wars in Iraq or Syria, more than any other country.

F.S. agreed to testify against some of the people he traveled with to Syria, Kastriot Halimi, Hajrullah Aliu and Dardan Kërqeli. The defendants have been charged with recruiting for and aiding terrorist activities. Halimi is supposed to have enabled a minor to travel to Syria by paying 50 euros for a passport and covering his travel expenses to Turkey.  According to the indictment, Halimi also provided aid to various individuals in late 2014, helping them join terrorist organization such as ISIS and Al-Nusra.

F.S. has testified that Halimi accompanied him on his journey to Syria along with Hajrullah Aliu, an imam he had heard of before and several other Kosovars he did not know.

In a recent testimony, F.S. explained that the conscripts took the well-known route to Syria:

“Kastriot and I initially met in Ferizaj the day we left for Syria and then took a taxi to Skopje and went to Istanbul by plane. From there we went to Gaziantep, a Turkish border town close to Syria, and crossed into ISIS-controlled territory,” he said on March 29.

The witness said that he went to Syria without his parents’ knowledge and permission because he believed they would stop him.

“I did not let my parents know about my departure because I thought they would refuse to let me go,” he admitted. “ I thought that we would find affection from the Syrian people, the Muslims, and that they would help us get in touch with our relatives.”

In court, he said that that his motives were humanitarian and he was driven by “compassion for every innocent child and person who suffers from that war.”

“You cannot just stay here and help the people, you have to take part in the war,” he continued.

According to him, internet lectures given by Albanian and Kosovar imams were part of the reason he was convinced to journey to the conflict zone.

“I listened to Ahmed Kalaja’s and Fatmir Latifi’s online lectures a lot, together with prophetic messages of the Prophet [Mohammed], which said that the land of the Levant needs to be protected and supported by Muslims,” F. S. said.

Ahmed Kalaja, one of the many YouTube imam-stars, is a controversial imam from Albania, a hardliner who leads the Dinehoxhe Mosque in the center of Tirana. Kalaja’s videos, in which he often appears wearing a suit and a tie, are watched by thousands. The imam, often assumes the role of an agony aunt to his virtual congregation, as he answers their queries in front of the camera.

Similarly, Fatmir Latifaj, an imam in one of Mitrovica’s many mosques communicates regularly with his congregation through his official Facebook page, which have over 30,000 likes, and posts his lectures on YouTube. 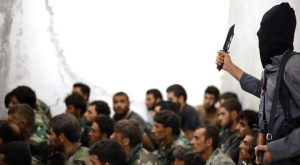 Upon arrival in Syria, F.S. and the other would-be fighters fell into the hands of ISIS.

“Things were different there, the ISIS militants told us that you can not stay here only to help the people, but you have to join the war, and like every other rational person I decided to return to Kosovo,” he said.

When F.S. expressed his desire to return to Kosovo, he was tortured by ISIS members, who suspected him of being a secret agent. He was then sent to prison in Raqqa.

“It was not easy to leave their territory because they saw the people who wanted to leave as possible secret agents from other countries,” F. S. said. “From the moment I was separated from Kastriot [Halimi, the defendant], I was taken, blindfolded, with a few other people of different nationalities to the prison in Raqqa. We were held there for about four months and subjected to psychological and sometimes even physical torture.”

“They constantly kept us blindfolded reminded us ‘You are under our control, you will be arrested if you go back to your countries, we will execute you.’ There were even cases when they dragged us on the ground when we did not obey them,” he said.

According to F. S. he was the only Albanian in the prison and was interrogated in English.

“I don’t know if all Syrian militants spoke English but the ones that interrogated us spoke it fluently,” F. S. said. He worried he would not make it out alive.

“After four months, the militants saw that there was no benefit in keeping us and found mercy in their hearts and released us,” the witness said.

The witness also recounted the difficulties of returning to Kosovo after being released from the ISIS prison.

“After the Islamic militants released us, they expelled us along with a crowd of Syrian civilians who were leaving the country. I went to Turkey illegally while my passport, mobile phone and other belongings had been confiscated by the militants,” he recounted.

Traveling without any money, an identity card or any means of communication was very difficult.  “I got to Istanbul from the border by begging people for money,” he explained.

FS. concluded  his testimony by saying, “I thank God that I got out alive and [beg that] all of these cases be treated with the utmost sensitivity.”

Previously the article made a reference to ISIS as ISIL.