Before heading to the Himalayas for her next expedition, Kosovo mountaineer Uta Ibrahimi shared stories of her life climbing above the clouds and her quest to get people in Kosovo “looking up at the sky and the stars.”

“I think I’ve had my period on almost every mountain I’ve climbed,” says Uta Ibrahimi casually, ticking off the peaks that she has summited in the last ten years on her fingers. “Dealing with this is something that people need to know about if they’re going to climb a mountain.”

Ibrahimi, who in 2017 became the first person to take the Kosovo flag to the top of Mount Everest, has no problem talking about the uncomfortable. She is about to embark on her next Himalayan expedition, just south of Everest to Lhotse, the world’s fourth tallest mountain, rising to 8,516 meters.

The 35-year-old mountaineer is proud of her achievements and believes that her journey is one that can inspire others, particularly women. But Ibrahimi refuses to overstate their significance – what is important, according to her, is making the impossible feel possible for women that are told otherwise.

“I was told ‘we are not taking you because it is too difficult for you,’” she says, recalling her first attempt to climb Everest. “I don’t want anyone else to feel how I felt when I heard that.”

Journey to the top

Ibrahimi is best known for her ascent of Mt Everest, the highest mountain in the world, becoming the first Kosovar woman to do so back in 2017. Beginning her training after leaving behind a lucrative marketing career in Prishtina, she was rejected by a team from Kosovo that were preparing for the same journey. Ibrahimi says that the team claimed they were unwilling to “take responsibility” for a woman climbing the peak, though another woman was later added to the group. 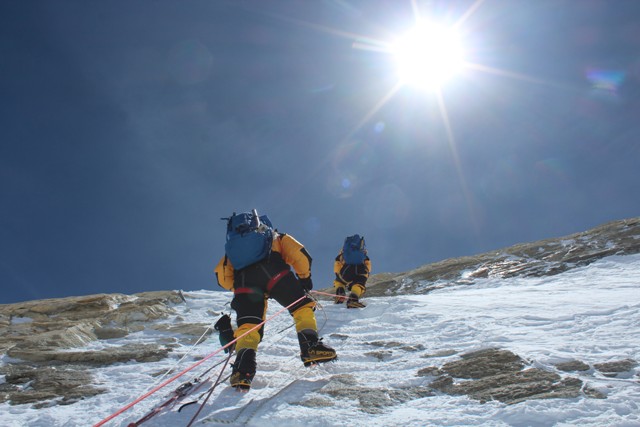 “Women especially have a hard time making choices like this, my own family did not think I should do it,” she says. “Not only because they thought I’m not capable but also they didn’t understand why, having a good job, I would throw that away.”

Fortunately, fate crossed her path with Xhim Berisha’s, the head of the Albania-based Dajti Alpin Association, who was searching for Albanian women willing to take on the challenge.

Being ‘the first’ to do anything is a crowning achievement, and the ‘first woman from Kosovo to beat Everest’ is no different. Ibrahimi recalled how tensions ran high as she raced the Kosovo team of alpinists that refused her a spot on their expedition in an unofficial head-to-head chase to the peak. 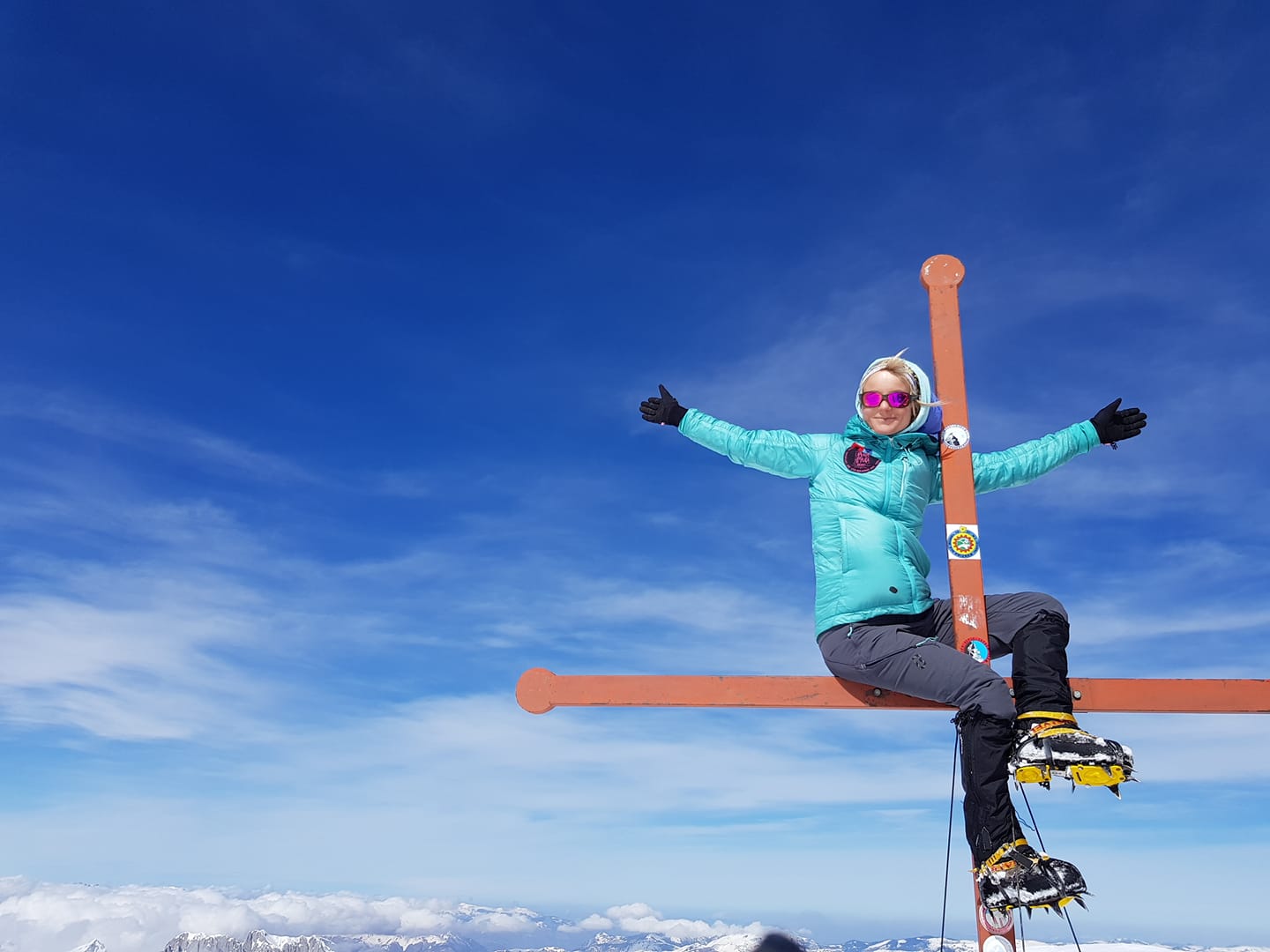 She recalled meeting them a few hours after she made it to the top, when Ibrahimi was descending, having beaten them to the summit by a matter of meters.

“They still won’t really talk to me,” she says with a smile.

Since her climbing career kicked off, Ibrahimi has trekked up and down the Balkans, across Europe and the Himalayas. Her goal now is to reach the peaks of 14 of the world’s highest mountains within seven years. All 14 are over 8,000 meters, and four have already been completed since conquering Everest.

She already successfully climbed Lhotse’s west face in 2018, but will now be joining a team of renowned South Korean alpinists to complete a route up the south face of the mountain, which has been described by Nepalese tourist companies as “tremendous,” “extremely difficult” and “rarely attempted.”

The team are taking the ‘Kuzcuzka’ route up Lhotse, which lies on the border between Nepal and Tibet. The route is named after Jerzy Kukuczka, who died attempting to climb the route. He was the second ever man to climb every peak over 8,000 meters in the world within seven years, the exact same feat that Ibrahimi is currently attempting.

Stories of rivalry and danger surround climbing these peaks, reflected in the suspense-filled documentaries that have recorded these intense journeys to the top. Ibrahimi will be the subject of her own documentary for this expedition, her journey followed by National Geographic.

But the mountaineer rolls her eyes at documentaries like ‘Everest’ or ‘Mountain,’ and advises turning off the dramatic background music, then you can experience the reality of ascending the vast expanses of the Himalayas.

A career mountaineering comes with other dangers, Ibrahimi explains. She is not often asked about the mental tax that has to be paid climbing the world’s highest mountains.

State of mind in the state of nature

Mountaineers often relay the sense of euphoria that comes with reaching the top of a mountain. But the months of trekking that it takes to get to that point are far from a serene journey of self-discovery. 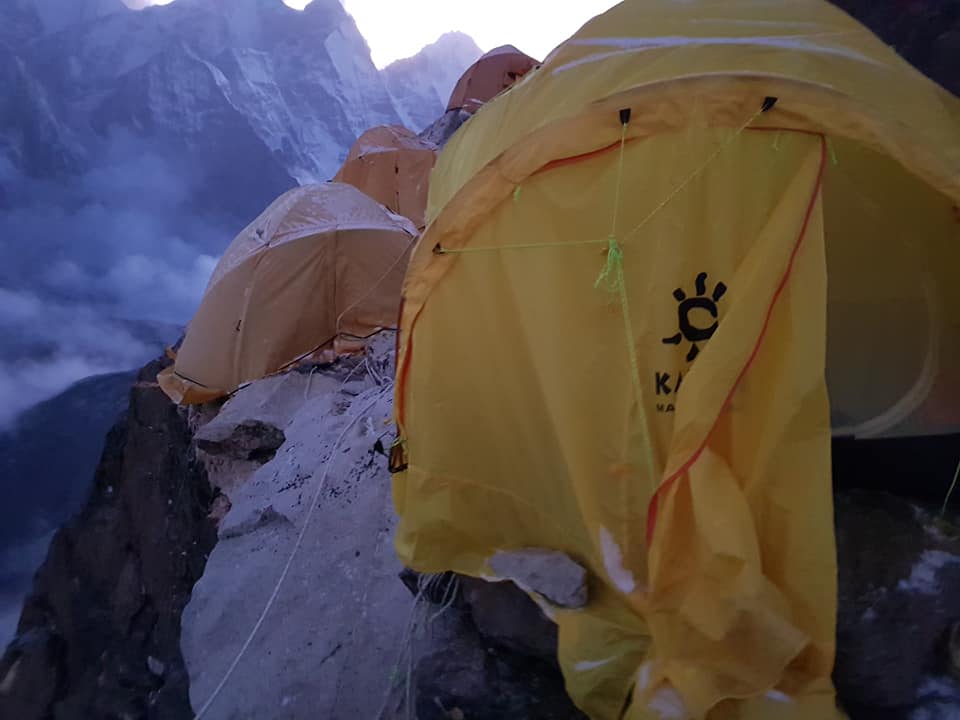 “Staring at the snow for days on end and seeing nothing but white can really affect you,” she says.

It is both physically and mentally exhausting to scale the side of a mountain. Ibrahimi spends months at a time climbing on barely any sleep, around two hours of rest in a tent on the hard ground is a good night. It only makes it harder to know that when she gets back up, the ascent continues with 16 kilograms of equipment on her back.

For someone as small as Ibrahimi, she says, this takes a toll.

Psychological training is crucial, says Ibrahimi. If your mind is not ready to climb, no amount of physical preparation will get you to the peak, and being ready for the solitude that comes with climbing is key. 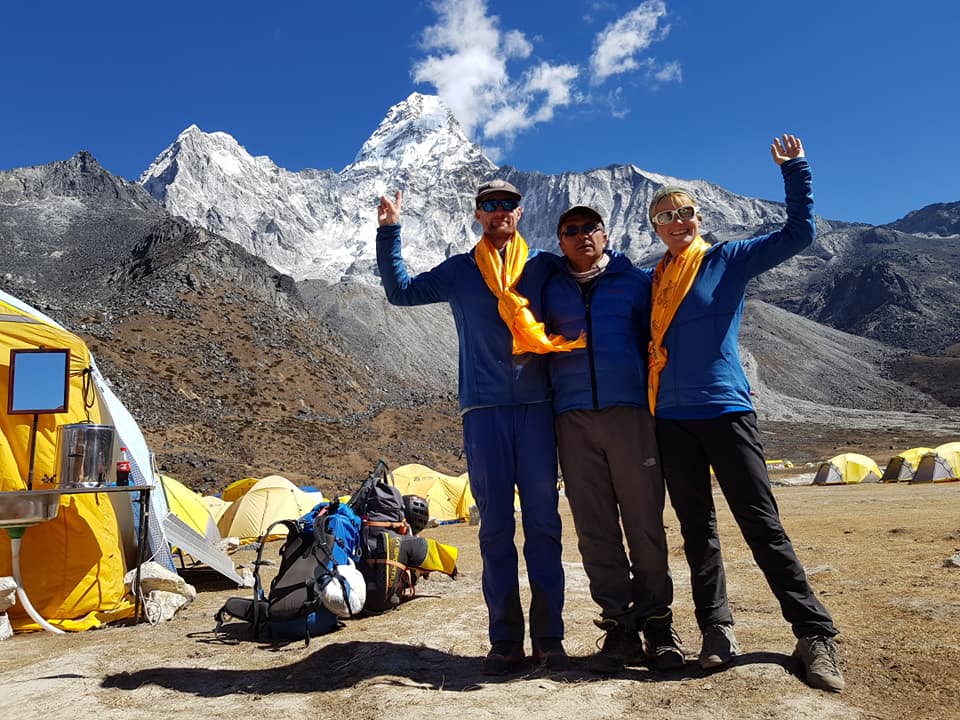 In another sense, Ibrahimi welcomes this kind of isolation. Urban spaces can be oppressive, and, as Ibrahimi recalls her life before Everest, her attachment to climbing begins to make sense. Moving from her apartment, to the office, to a cafe, to the gym, to a bar, all day every day, Ibrahimi had often felt caught in the trappings of city life.

“You have a real chance to reflect on yourself,” she says. “Climbing a mountain really makes you see how small human beings are in this world. And when I come down from the mountain, I’m full of energy and free of negativity.” 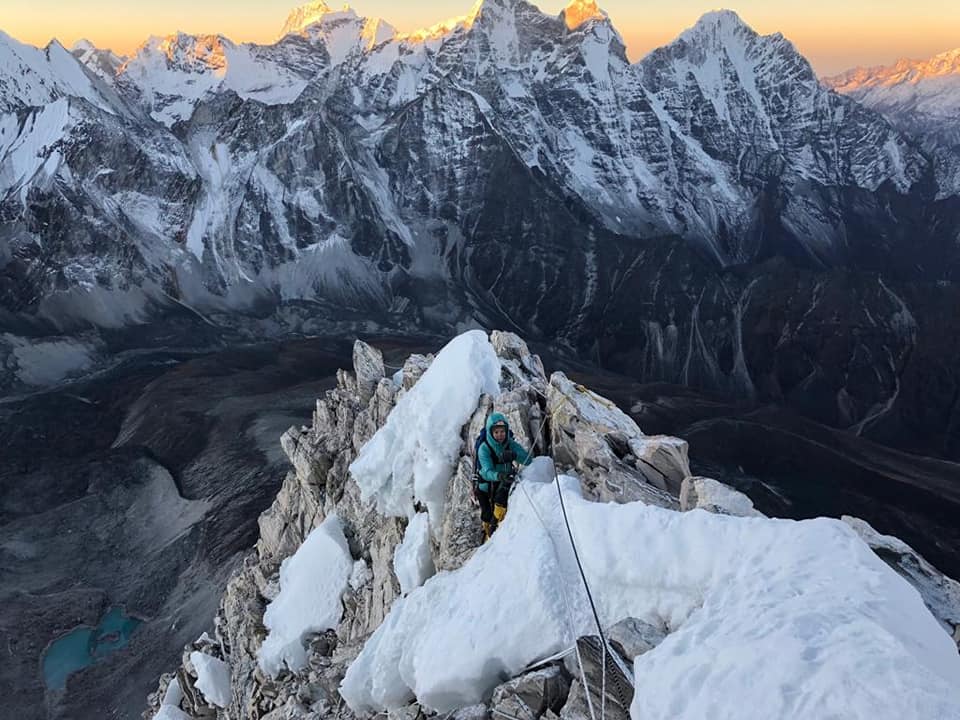 The energy coming from mountains is palpable, Ibrahimi says, partly because the Himalayas are full of holy sites. Taking part in ritual, prayer, dance, something required before embarking on Himalayan expeditions, she feels only adds to the spirit of reflection that comes from spending time in sacred spaces.

But training yourself to be ready, both body and mind, for what Ibrahimi has achieved is a monumental task. Despite this, she emphasizes that drive and a hard work ethic are needed to achieve what you want.

“Whether it’s climbing a mountain, or just going on a walk or to the gym, what it really takes is hard work and pushing yourself,” she says.

Ibrahimi feels a responsibility to share this message with others. As a role model for many, Ibrahimi uses this position to promote goals that are close to her heart: environmental conservation, and pushing for gender equality. Her work in this area was recognized in March when she was awarded with the title of Kosovo Champion for Sustainable Development by the UN Kosovo Team.

When she is not climbing mountains, Ibrahimi runs her touristic company Butterfly Outdoor Adventure, which organizes rock climbing, hiking and cycling around Kosovo and the Balkans. 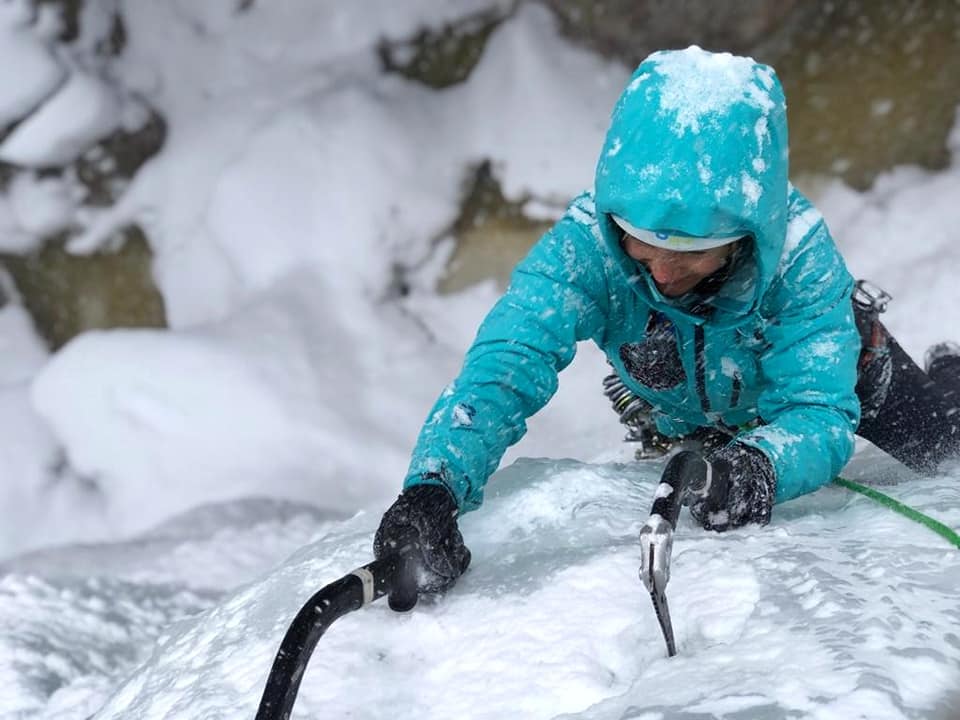 Ibrahimi dedicates her spare time to visiting schools around the country as well, talking about her experiences, teaching younger generations about nature and inspiring children to follow in her footsteps.

She emphasizes how important, and fun, talking to the next generation of people who can build a healthy relationship with Kosovo’s nature can be.

“This week, one of them said to me ‘Okay, so I know this is embarrassing, but where do you pee when you’re up there? There must be lots of people around that can see you,’” she recalls, laughing.

The question might seem irrelevant to Ibrahimi’s conservation efforts, but it is more important than you might expect. Mountaineers in particular have changed their approach to recycling and waste as people began paying more attention to protecting the natural world.

“People think that when we climb mountains, we leave trash everywhere behind us. That might have been true in the ’60s and ’70s, but now we don’t even leave our shit behind – we take it down in little bags!” she exclaims.

Ibrahimi believes that indifference to recycling and responsible waste disposal can be a result of lack of education.

“When it comes to changing things here, it’s all about awareness,” she says. “There has never been a proper campaign, people never learned about it in school, and especially in rural areas, people don’t know that what they are doing is a problem.”

“The kids promised me that they never throw away garbage,” she says, laughing.

Not that adults are a lost cause, says Ibrahimi, who believes that people’s understanding of the role they play in conserving the environment has diminished as consumption of non-biodegradable waste has increased. Growing up in her native Gjilan in the ’80s and ’90s, Ibrahimi reflected on how people have failed to adjust to a complete dependence on plastic.

“Back then, people were recycling without even knowing what that means,” she said.

“We reused glass bottles for drinking, we didn’t take plastic bags to the store everyday, even the container for milk, my mother would wash it and use it for something else in the house,” Ibrahimi recalls.

She recounts seeing mountains of plastic waste piled high today, not just in Prishtina but the countryside as well, as remote homes in the mountains have no way to deal with the sheer amount of extraneous waste they have no choice but to consume. At present, Kosovo severely lacks the ability to control waste.

“It pains my heart,” she says.

But no matter how far above the clouds she climbs, Ibrahimi never lets Kosovo out of her sight. Her mission, be it at home or in the Himalayas, is a simple one: to show children that nature does not belong to us, to show women that they belong in nature, and to show everyone that the Kosovo flag belongs atop the highest mountains in the world.

by Blerta Iberdemaj
Next: Opinion