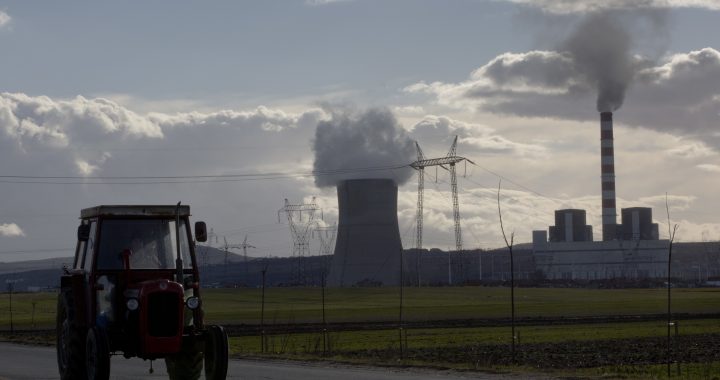 A tractor passes by power plant Kosovo B in the village of Obilic, Kosovo Wednesday, March 7, 2018. Millions of Europeans who arrived late to work or school have a good excuse an unprecedented slowing of the frequency of the continent's electricity grid. The Brussels-based European Network of Transmission System Operators for Electricity, or ENTSO-E, said Wednesday the problem began mid-January and affects 25 countries, from Portugal to Poland and Greece to Germany. (AP Photo/Visar Kryeziu)

Kosovo’s electricity network system operator, KOSTT, has begun to operate independently across the whole of the country and as part of a new energy bloc with neighbouring Albania, officials announced.

Electricity network system operator KOSTT began to operate independently on Tuesday in a newly-established regulatory area covering the whole of Kosovo, including the Serb-majority north of the country, Kosovo’s Foreign Ministry announced.

The move gives KOSTT independence from the Serbian operator, EMS, which up to now was distributing electricity to Serb-dominated municipalities in northern Kosovo.

KOSTT has also linked up with Albania to establish a Kosovo-Albania energy bloc.

“The start of the new energy regulatory area within the Kosovo-Albania regulatory bloc is a great achievement for Kosovo – both internally and in terms of fulfilling the state sovereignty of the Republic of Kosovo in the field of energy,” the Kosovo Foreign Ministry said in a statement.

Kosovo Prime Minister Avdullah Hoti wrote on Facebook that KOSTT “has fulfilled all the conditions stipulated in the agreement and now operates independently”.

Albanian President Edi Rama described the change that this is a historic achievement.

“We finally managed to get to this day, which, when we look back, took a long time,” Rama said on Tuesday.

The joint Kosovo-Albania energy bloc was made possible by an agreement in April this year between Kosovo and Albania and the European network of transmission system operators, ENTSO-E.

But this was criticised by Serbian President Aleksandar Vucic, who warned the Kosovo authorities not to make unilateral moves.

“I am warning them of the illegality of their decisions. We will complain everywhere,” Vucic said.

Back in 2015, Serbia and Kosovo made an initial agreement on energy as part of EU-mediated talks to normalise relations.

But this was blocked by Serbia because the agreement stipulated that two Serbian-controlled companies must register with Kosovo’s Energy Regulatory Office. Serbia refuses to accept any symbol of Kosovo’s sovereignty.

It was also agreed that Serbia would establish the Elektrosever and EPS Trgovina companies, which would work according to the laws of Kosovo.

But according to Belgrade officials, Kosovo did not register the two companies.

The director of the Serbian government office for Kosovo, Petar Petkovic, told media on December 8 that nothing would change after December 14, until the two companies are registered, whatever the Kosovo authorities claim.

In the run-up to Tuesday’s changes, the Serbian opposition has been accusing the government in Belgrade of giving up sovereignty over electricity in Kosovo. Government officials have remained silent so far.

Officials in Belgrade and Pristina have not yet explained how the change will affect people in the Serb-majority north of Kosovo in practice.

Dragisa Mijacic, a coordinator of the National Convention, a consultation body between civil society and government on Serbia’s EU accession process, who deals with issues related to the Kosovo negotiation process, told N1 TV that the practical consequences of the move will be that Serbia will not be able to distribute electricity in the north of Kosovo without consultations with KOSTT.