Writer and Director Antoneta Kastrati sat down with Prishtina Insight to talk about her upcoming film, Zana, which will begin production in Kosovo next month.

Antoneta Kastrati does not shirk away from dealing with experiences of war, especially those of women, head on in her films. A Los Angeles-educated filmmaker and documentarian originally from Peja, she recently returned to Kosovo to make her first feature-length film.

Zana, a psychological drama that brings together themes of motherhood, black magic and the memories of war, will be in production through the winter and spring of 2018. An Indiegogo campaign was recently initiated to help with production costs.

“Most of the ideas and inspiration behind the film are connected to what I’ve experienced personally, and particularly as a mother,” she told Prishtina Insight. “I have two daughters, and focusing on ideas and perceptions of motherhood is really important for me. A large part of Zana deals with the constant fear of trying to keep your children safe, and coming to terms with the fact that it isn’t always possible to be that safety net for them.”

Previously a documentary filmmaker, Kastrati began working with fictional stories when studying at the American Film Institute in 2009. 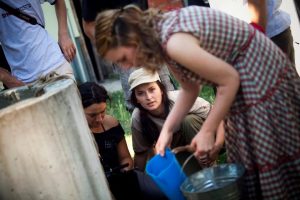 “This was the first time I was able to deal with the war and personal stories. Before, I wasn’t ready. In fact, Zana goes deeper than this, I’m able to deal with not just my own experience, but to piece together a story that goes beyond my own. This is the beauty of fiction.”

Zana tells the story of Lume, a young woman living with her husband and mother-in-law in Kosovo. After losing her only child in the war ten years ago, Lume suffers a miscarriage, and although determined to have another child, is unable to get pregnant again. In a fit of desperation, at the behest of her formidable mother-in-law, Lume turns to healers practicing black magic for a solution.

Zana’s origins began in 2011 when Kastrati made the short film Kofja e Zbrazet (The Empty Bucket), where a young woman survives a massacre in which her sister was killed, and has difficulty coming to terms with becoming a parent after feeling incapable of saving her.

Always with the help of her sister and Director of Photography, Sevdije Kastrati, and her husband and producing partner, Casey Cooper Johnson, Kastrati has successfully embarked on a number of important projects not just reflecting on Kosovo’s reality following the end of the war, but posing critical questions that transcend borders.

“I’ve spent the last 15 years making films about important social issues that need to be talked about; the environment, sex, homophobia, gender, things that the media in Kosovo hasn’t made space for yet,” she said.

Although committed to continuing this work, she is ready to dive into the more personal aspects of filmmaking.

For her first feature, Kastrati is returning home – a rural village outside of Peja, where the majority of the film’s scenes will take place.

“The area is so picturesque. I was brought up in a village just like this one, the same landscape, nature, animals,” she recalled. “I remember it from the war, too: while all these horrible things were happening, the grass around our home kept growing higher and higher. Nature is so indifferent to war, and I love this contrast. The film reflects this beauty of nature, not the gloom of the conflict.”

The actors will be living on set in Peja for two weeks before filming starts next month. The character of Lume will be played by Adriana Matoshi, known for the film The Return, which won the International Fiction Short Film award at Sundance Festival in 2012. Playing Lume’s husband is Astrit Kabashi, who starred in the Oscar nominated short film, Shok (2015), and in Babai (2015), which was nominated for a European Academy Award and earned him a Best Actor award at Munich Film Festival.

A practitioner of black magic will be playing the role of the healer that is visited by Lume in the film.

“I met this woman from Gjakova, Nurije Kelmendi, while I was making my documentary Seeking Magic in 2009, following the stories of real women that were looking for her help… She’s such an intriguing character, and thrilled to be practicing her rituals on screen again… We will follow her lead, do some improvisation, and see what happens!”

The atmosphere of black magic surrounds Zana, creating a fascinating yet frightening twist to an otherwise true-to-life story of human relationships.

“People still turn to black magic out of desperation, when they need help with family, or  becoming a mother. I saw it when I was growing up in my own family, young women often with a lot of mental health issues would look for help. Even now, there is still a stigma around seeking psychiatric help, and particularly with post-traumatic stress disorder, people wouldn’t know how to react.”

Zana brings issues like this to the surface, particularly the problem of communication about the trauma of war.

“It’s not that we don’t talk about the war, we talk a lot. But we just don’t go deep enough,” she said. “This is another thing that I really hope to show in this film, that we don’t have enough communication on this level.”

Kastrati hopes to reflect on not just the realities of motherhood, but also the side we don’t really see. While she was developing the story, Kastrati interviewed women who had been through similar experiences to Lume in preparation for the film.

“I was interested in constructing this idea of the strong mother. Of course, women have to live, they have to move on, even after they experience tremendous loss. But I wanted to tell the other side of the story as well, what really happens inside, how women process this grief and continue on regardless.”

Zana is still in its fundraising stage, and Kastrati and her team are making appeals to gain as much support as possible.

“I am devoted to telling the story of Zana, not only because of my past, but also because every day we witness unimaginable tragedies that continue in conflicts around the world,” she says. “I invite you to join me on this journey and help bring Zana to the screen. Any amount of donations, even small, are a real help for us to achieve our goal and make the film possible.”

You can support the production of Zana, which will begin 22 January, by donating here.

A dialogue with whom and for whom?

by Sanja Sovrlic
Next: News