The power of guilt in ‘SHOK’

A Kosovar co-production won an Oscar nomination for the first time.  Fjolla Hoxha reviews the short film’s chances of getting the golden trophy.

Kosovar filmmakers have always dreamt of the Oscars and many of them thought they could make a film worthy of a gold-plated statuette. It is a prestigious film event, yes, but also very competitive for global filmmakers as there is only one category reserved for non-U.S. films.  Since 1929 when the first Academy Awards were held, only nine international films have won the Oscar for Best Picture.

The Kosovar film industry has only recently started to stand on its feet and receive international recognition thanks to the strong support of the Kosovo Cinematographic Center. However, only its internationally co-produced films Babai (written and directed by Visar Morina) and SHOK (written and directed by Jamie Donoughue) have been able to reach the longed for peak of success and recognition.

A British-Kosovar co-production, SHOK, has been nominated by the Academy Awards on the category of Best Live Action Short Film. Much anticipation of this year’s Oscars stems from the fact that it is considered the first Kosovar film to be nominated. The film was written and directed by a Briton whose interest in the country’s culture and stories seems like mere happenstance, but it isn’t.  Donoughue was stuck in Kosovo after a short visit when the Icelandic volcano Eyjafjallajokull caused the cancellation of his flight. Thus ‘a natural incident’ enabled him to meet the Kosovar actor Eshref Durmishi who is the co-producer of the film. Together they entered a whole new chapter in their creative life.. Perhaps  SHOK is best described as the first short film that has managed to raise wide international interest in the Kosovo war in 1998-99.

Before seeing SHOK I watched a recording of reactions of non-showbiz people in L.A to the film. What stood out the most was guilt. These people somehow remembered the TV news on the Kosovo war from 17 years ago and compared the current events in Syria to their comfortable lives. It really fascinates me that as people, we can understand occurrences beyond our personal experiences.

Not many great films depicting wartime Kosovo have been made to date. Perhaps because in film,  it is very difficult to illustrate individual stories and human relationships that could resonate universally.

SHOK revolves around the concept of friendship, what makes it and what breaks it, as the foundation of the bond between  the two protagonists is shaken. The connection between the two characters Petrit and Oki is not complicated, nor are their dreams to ride a bicycle or have a sleep over, but the situation they are in makes it impossible for them to go through their youth without facing cruelty. Petrit, a confident child, has learned to survive under extreme circumstances, or appears to have done so until his friend Oki interferes with his scheming.  The relationship between Petrit and Oki shifts many times throughout the film, from doubt to trust, from guilt to forgiveness, from receiving protection  to being protective.

Beyond the sensitivity added by the storytelling from a  child’s perspective ( a bonus for creators of any kind of art due to viewers’ sensitivity to innocence), the audience can empathize with the strong friendship of the two protagonists.

The stakes are high when one looks the other straight in the eye in this film. That’s what gets boys into trouble and pisses off soldiers. The strength of a child’s look has the power to reveal the absurdity of violence. Again, guilt becomes unbearable.

‘…And don’t you dare turn your heads or we’ll shoot you on the spot, understood?’ – says the soldier. I wonder where I’ve heard this phrase before? ‘Don’t turn your head around or you’ll turn to stone?’ Whoever is familiar with the myth of Lot’s wife and how she became a pillar of salt after she looked back at Sodom will be able to bridge these two moments.  To turn your head back means to depend on the past. Only the ones who are strong enough to not look back survive. 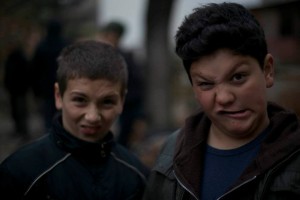 Andi Bajgora and Lum Veseli on the set of SHOK.

This is the philosophy that engenders empathy, especially for a non-Kosovar audience, echoing the pain of being forced to leave home. No one believes that it can happen to them until it actually does. The viewers in L.A. don’t believe this would ever happen to them. Neither does Petrit’s father, who is watching news on the massacres currently happening a few kilometers away from his house. We all have a hard time grasping the insanity of war.

The film transmits a very strong sense of psychological trauma and the expectation keeps viewers on the edge of their seats throughout the film. The faces of Petrit’s family reflect pain, fear and hopelessness. So does the lullaby soundtrack, which normally would accompany a baby’s happy arrival.  I am very familiar with those faces because that is how my parents looked when I was around Petrit’s age during the war. The film left me with a bitter feeling and with the guilt of having forgotten.

In the end, it all comes down to facing your own demons. I am a firm believer that in order to overcome a shock, one needs to relive it somehow. Maybe the film is the most vivid reenactment of a bygone bitter experience – obviously, besides psycho-therapy.

SHOK stands a very good chance at the Academy Awards ceremony this Sunday. If for nothing else, for the message that is transmitted through Petrit’s character: He is able to laugh off the derogatory term ‘Siptarsko Djubre’ (Albanian trash) and has totally embraced life as it is served to him: in ruins, discriminated for who he is, nothing he could have chosen.

The first night at the protest camp

by Atdhe Mulla
Next: News